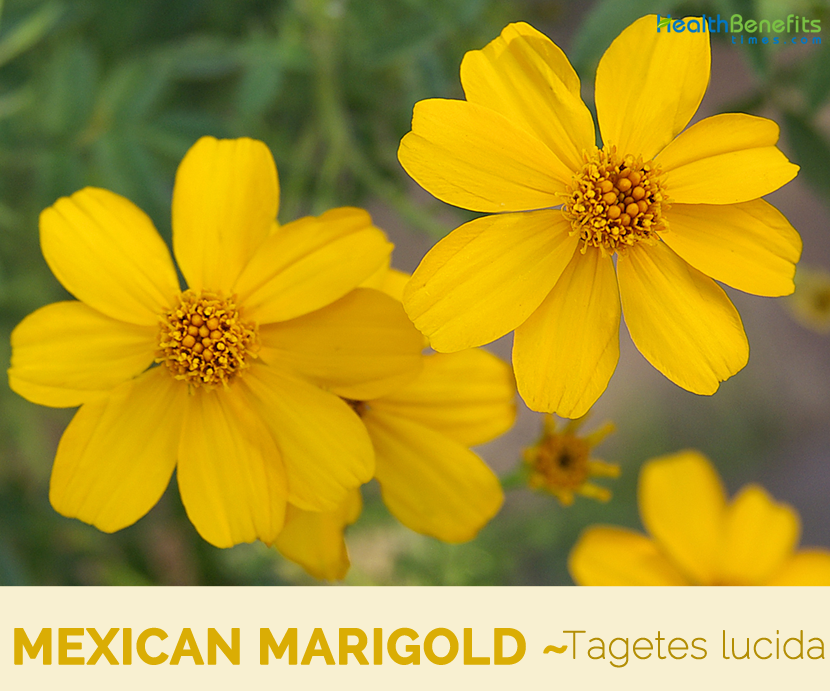 Tagetes lucida commonly known as Mexican marigold is a species of flowering plant in the Sunflower family Asteraceae that is native to Central America (Mexico, Honduras and Guatemala) and South America. It thrives in the south of the United States and in México and is grown in many warm temperate areas worldwide. It is cultivated as an ornamental in the highlands in Java. Other common names of the herb include Cloud Plant, Mexican Mint Marigold, Mexican Tarragon, Mint-Marigold, Spanish Tarragon, Sweet Scent Marigold, Sweet Scent Mexican Marigold, Sweet Mace, Texas Tarragon, Winter Tarragon, yerbaniz, pericón, Cempaxóchitl, Yerbis Anis and hierbanís. The genus name “Tagetes” is derived from the Roman god Tages who was the son or grandson of Jupiter.  The species epithet “lucida” is the Latin word for bright or shining and refers to the bright color of the flowers. This plant is used both as medicinal as well as culinary herb.

Tagetes lucida or Mexican tarragon is a powerfully psychoactive species of marigold that was used as ritual incense by the Aztecs.  Even now, this species of marigold is used in Mexican Dia de los Muertos celebrations as an offering to the deceased.  These beautiful flowers are also used regularly as flower offerings in Hindu and Tantric ceremonies in Nepal and India, and are associated with the goddess Bhagwati and the god Shiva.

Mexican marigold is a half-hardy semi-woody herb to subshrub that grows about 18-30 inches (46–76 cm) high and 18 inch (48 cm) wide. The plant is found growing in forests and on hilly or rocky slopes and normally prefers well-drained, moderately fertile soil, growing well in clayey and sandy soils. The plant has smooth, upright, unbranched stems.

Leaves are opposite, linear to oblong, about 3 in (7.6 cm) long, and shiny medium green and finely toothed margin, acute and tapering base, sessile and glandular. Bruised leaves have a sweet tarragon-like smell with overtones of anise. Leaves are deep glossy green above, pale green below. Underneath are tiny glands filled with oil that smells like anise.

In late summer plant bears terminal clusters of small yellow to orange flower heads on the ends of the stems. The flowers are about 1.5 cm in diameter, comprising a single whorl of 3–5 (−7) ray florets with yellow to orange-yellow corollas, and numerous disc florets in the center of the capitulum. The flowers are hermaphroditic (have both male and female organs) and are pollinated by insects.

Fruits are classified as cypselae and each contains one seed. The fruits are linear and thin. On one end of the fruit, there is a two-pronged, beige projection known as a pappus that promotes seed dispersal. The fruit including the pappus is about 1 cm long. However, plants grown in Singapore typically do not produce fruits.