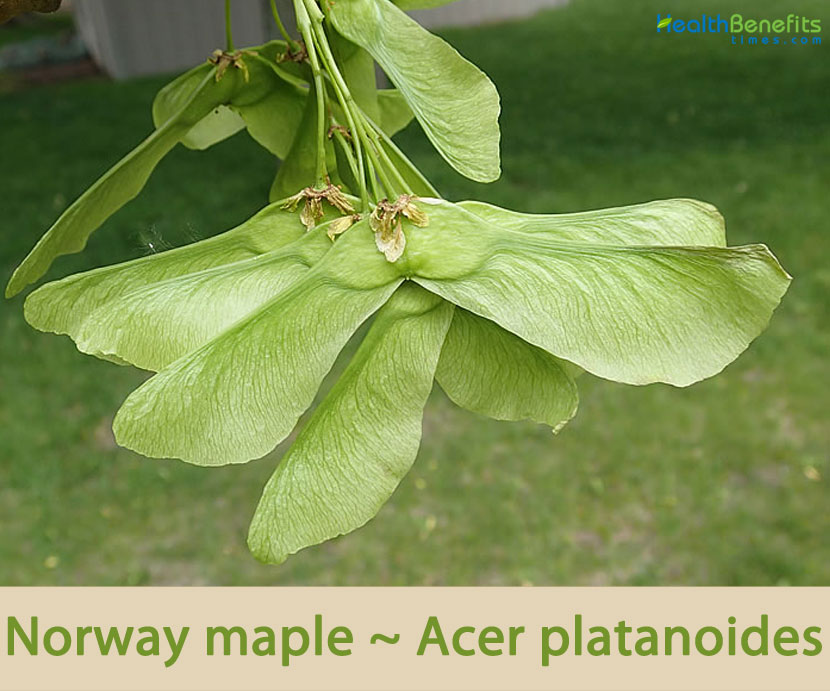 Acer platanoides, commonly known as the Norway maple, is a species of maple belonging to Aceraceae (Maple family). The plant is native to continental Europe and western Asia. It occurs naturally from central France in the east into central Asia Minor and northern Iran in the west, and from southern Norway and Sweden to northern Spain, Italy, and the Balkans. It is the most widely distributed maple in Europe. It has naturalized in Great Britain, the northeastern United States, and southeastern Canada. It was introduced to North America in the mid-1700s as a shade tree. It has been widely planted in urban areas throughout much of the U.S. Genus name is the Latin name for a maple tree. Specific epithet means resembling platanus (sycamore), which is somewhat curious since the leaves of Norway maple do not really bear that much resemblance to sycamores.

Norway maple, Harlequin Maple, Plane, Norway Maple variety and plane maple are some of the popular common names of the plant. Norway maple is widely planted as a shade tree in urban areas because it can tolerate drought, deicing salt, compacted soils, and air pollution. Norway maple has many cultivars with distinct forms including columnar and weeping varieties.  Another distinct characteristic is the green to burgundy range in leaf color.

Norway maple is a medium- to large-sized fast-growing, deciduous tree that normally grows to 40-60 ft. (12-18 m) in height, but can reach heights of 100 ft. (30 m), with a trunk up to 1.5 m (5 ft.) in diameter and can live to 150 years.  The plant has straight trunk, widely spreading symmetrical crown and rounded appearance. The plant is common in parks, large gardens, and town suburbs, in shelterbelts, near chalk lands, colonized hedgerows, thickets, woods, successional forest, and forest wetland, along roadsides, wasteland, and disturbed ground, nearby woodlots, forest edges and fragmented forests. The plant grows best on moist, adequately drained, deep, fertile soils. It is intolerant of low soil nitrogen conditions and is rare on acidic (pH near 4) soils. It makes suboptimum growth on sandy soils or soils high in lime or clay content, and does not tolerate high evapotranspiration or prolonged drought.

Twigs are stout, smooth, and hairless. Branch tips are often forked the result of a terminal flower cluster and opposite arrangement. The shoots are green at first, soon becoming pale brown. The winter buds are shiny red-brown. The terminal bud is purplish-green or reddish-purple, plump, and blunt with three to four pairs of fleshy scales. Young bark is grey and smooth, with ridges beginning to develop as the tree matures. Older bark is dark grey with regular shallow intersecting ridges (crisscrossing pattern, furrowed) and not scaly. 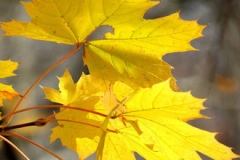 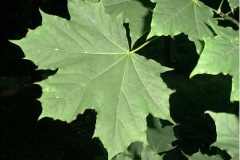 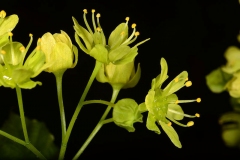 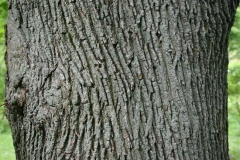 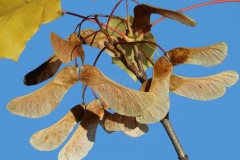 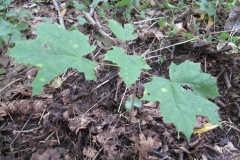 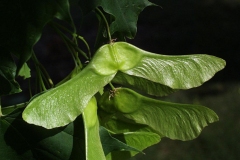 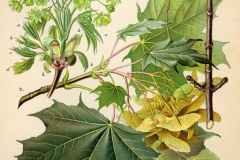 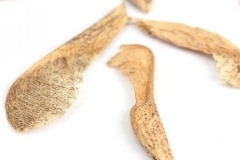 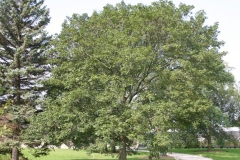 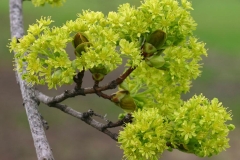 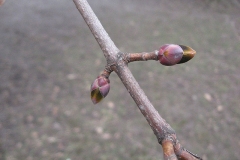 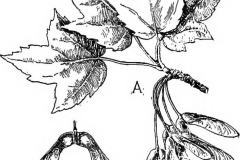 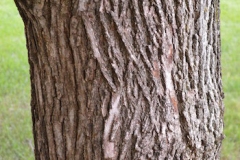 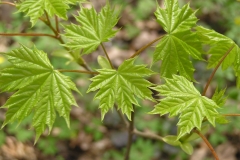 Leaves are simple and oppositely arranged with five to seven palmate lobes. Lobes and teeth are sharply pointed. The upper surface of the leaf is dark green, and the undersurface is lustrous green and smooth, except for occasional tufts of hairs in vein angles. The leaves are slightly wider and are 7–14 cm long and 8–25 cm wide. The leaf petiole is 8–20 cm long. The leaf petiole, bud scales, and twigs exude a milky white sap when broken, which can be used to easily distinguish it from most other maple species. This milky sap is best seen at the base of a broken petiole. The normal green form turns a showy yellow in the fall, often as one of the very last trees to turn color in the season.

Round, branching, upright clusters about 2 inches across appear just prior to or at the same time leaves emerge in spring. Small male and female flowers may be on separate trees or the same tree. For both, the flowers open broadly, are  10 mm across, greenish yellow with 5 oval-lance sepals up to 1/8 inch long and 5 spatula shaped petals nearly twice as long as the sepals. In the center is a brownish green disk. Male flowers have 8 spreading stamens around the disk, females a 2-part, curled style in the center. Flower stalks are long, slender and hairless or glandular-hairy. Flowering normally takes place in between Mid-April and May. The flowers are not known to self-pollinate (self-incompatible).

Fertile flowers are followed by a pair of winged keys or samaras; each key is 3.5 – 5.5 cm long. They are initially green turning to brown as they mature. The winged samaras ripen in the fall (September and October) and are dispersed by wind and occasionally water. Both halves of the seed usually contain fertile seeds. The seeds are disc-shaped, strongly flattened, 10–15 mm across and 3 mm thick. The wings are 3–5 cm long, widely spread, approaching a 180° angle. It typically produces a large quantity of viable seeds.

Munger (2003) discusses the potential effects of fire on this species, noting that while a fire that removed all seed sources would be thought to reduce or remove the species, there is concern that a disturbance event of this type could lead to higher seedling recruitment and resprouting. Use of fire may also be an inappropriate management tool where A. platanoides grows in association with native assemblages that are not fire tolerant.

Digging up or other manual removal is suitable for A. platanoides seedlings and saplings as long as the roots are completely removed, or adult trees felled close to ground level. Girdling, by removing the bark and phloem layer from 10 cm around the trunk is also suggested. Removal of trees/saplings reduced subsequent A. platanoides recruitment and enhanced native A. saccharum regeneration, whereas removal of seedlings encouraged new A. platanoides seedlings to emerge; this is attributed to the soil disturbance associated with the pulling of seedlings. An additional cause for concern was that other invasive alien species colonized areas where A. platanoides trees and saplings had been removed.

Weber (2003) recommends that stumps be treated with herbicide after trees are felled. Combinations of cutting and herbicide in association with monitoring to determine when the treatment should be repeated are recommended by Royal Botanic Garden Canada (2003). Rhoads and Block (2002) propose pasting a triclopyr-oil mixture to the bark of saplings up to 10 cm in diameter at the base of the stem.

Webb et al. (2001) comment on the potential difficulty of locating a suitable biological control agent for A. platanoides because of the need to ensure that the closely related native species, e.g. the sugar maple A. saccharum, with which A. platanoides often grows, would not be affected by such an agent.