Facts and Food Sources of Fisetin 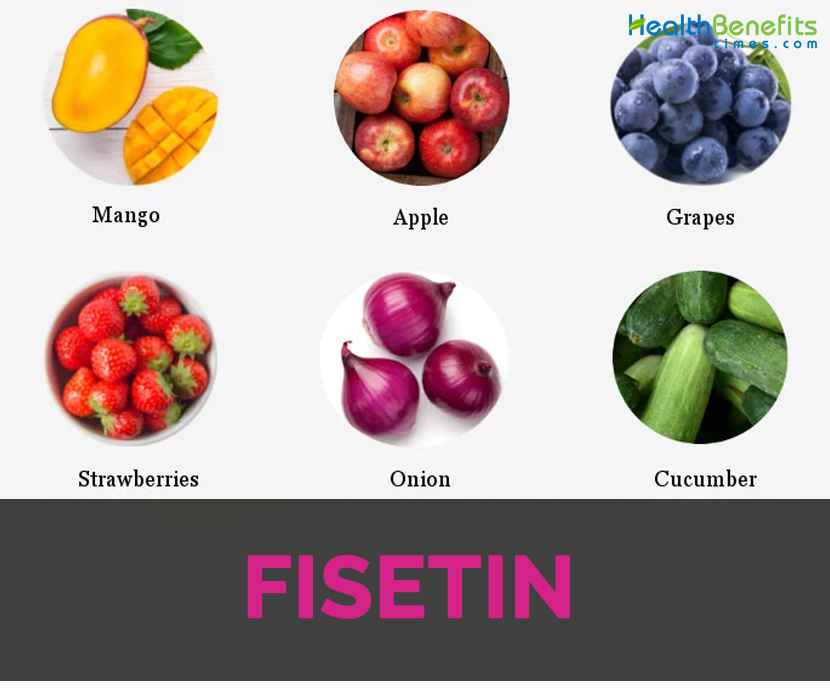 Fisetin is a plant polyphenol from group flavonoid. It could be found in various plants where it acts as coloring agent.  It is found in various vegetables and fruits such as apples, strawberries, onions, persimmons, cucumber and onions. In 1891, Austrian chemist Josef Herzig described its chemical formula.  It has various biological effects that are beneficial for treating neurodegenerative disorders such as Alzheimer’s disease. It protects nerve cells from oxidative stress induced death, enhance nerve cells differentiation and halt aggregation of amyloid β protein which causes progressive neuronal loss in Alzheimer’s disease. Moreover, fisetin promotes induction of hippocampal LTP on electrophysiological experiment amidst rat hippocampal and promote object recognition memory in behavioral experiment with mice which demonstrate that fisetin is a promising compound to treat impairment of cognition as well as memory.

Have a look on health benefits discovered about Fisetin:

It regulates various pathways (antioxidant and mitochondrial function) which are implicated in age associated decline in brain health. It protects degenerative brain conditions by activating certain transcription factors such as Nrf2 which promotes cellular glutathione levels which is a key cellular antioxidant with protective effects on nerve cells. It protects nerve cells from oxidative stress. Oxidative death is the main factor related with cognitive decline, Alzheimer’s, stroke and Parkinson’s disease. It limits accumulation of harmful compounds in brain. Fisetin effectively lowers impact and slows progression of Huntington’s disease in animal models.

Fisetin is an anti-depressant that promotes serotonin and noradrenaline in mice. Mice treated with fisetin displayed few symptoms of depression and anxiety as an outcome of pain. It shows anti-depressant effects which could be promoted with 5-HTP.

Senescence is the major reason people ages, the cells stop dividing as it becomes older. When these cells do not divide, it becomes useless, begins to compile in the body and trigger inflammation by impairing cellular function and promoting chances of age associated disease. Anti-aging researchers are discovering senolytics which is a compound that reverses or delays aging by damaging old and damaged cells. Research was conducted on mice fed with fistein rich diets which showed that mice lived longer and bodies worked better even at old age.

Fisetin reduces elevation of MG-protein glycation which is related with diabetes and has potential to use for treating diabetes. Fisetin normalizes increasing levels of lipid content in blood, kidney and liver in drug induced diabetic rats. Fisetin lowers expected cataracts formation. In diabetic rats, it increased HDL and lowered LDL. It maintains levels of blood glucose by promoting insulin sensitivity. It regulates carbohydrate metabolism by modulating major regulatory enzymes in liver and kidney tissues of diabetic rats.

Study shows that fisetin activates SIRT-1 which is a gene that is related with long lifespan and is often referred to as longevity gene. Dietary supplement with strawberry extract promoted activity of rats in rodent model of accelerated aging.

Study shows that mice were subjected to pain by modifying sciatic nerves. Fisetin treatment helps them to experience less pain in comparison to those who are untreated. It lowers heightened sensitivity to pain related with type 1 diabetes.

Facts and Food Sources of Fructan