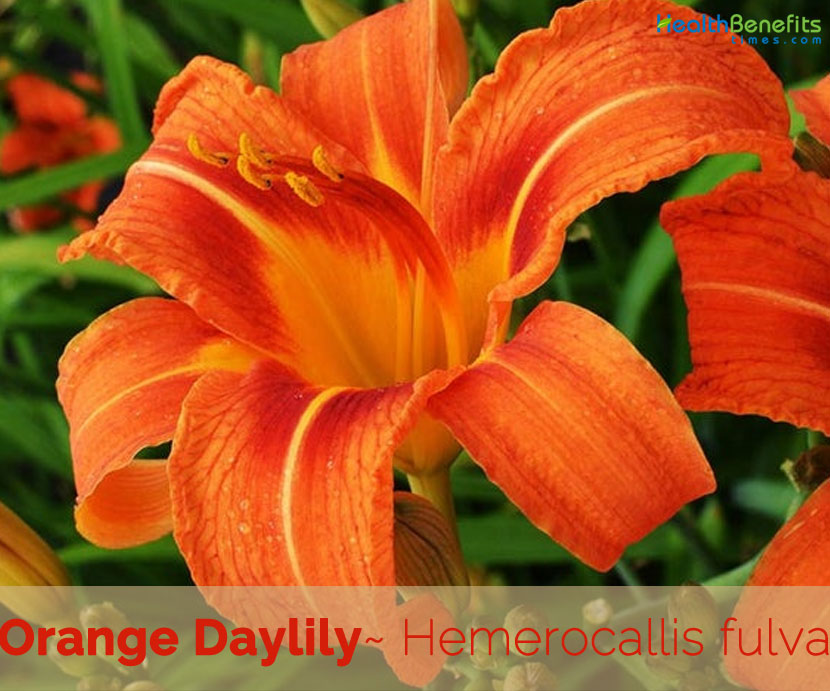 Hemerocallis fulva, popularly known as orange day-lily and tawny daylily is a species of daylily belonging to Liliaceae (Lily family). The plant is native to East Asia mostly China (Anhui, Fujian, Guangdong, Guangxi, Guizhou, Hebei, Henan, Hubei, Hunan, Jiangsu, Jiangxi, Shaanxi, Shandong, Shanxi, Sichuan, Taiwan, Xizang, Yunnan, Zhejiang).  It is cultivated in China, Taiwan, Korea, India, Vietnam and Japan and, as an ornamental, in many temperate and subtropical countries. It is very widely grown as an ornamental plant in temperate climates for its showy flowers and ease of cultivation. It is not a true lily in the genus Lilium, but gets its name from the similarity of the flowers and from the fact that each flower lasts only one day. Coastal Day Lily, Common Yellow Day Lily, Ditch Daylily, Fulvous Daylily, Orange Daylily, Tawny Daylily, Tiger Daylily, Common Day Lily, Double Daylily, fulvous daylily, ditch lily, railroad daylily, roadside daylily, outhouse lily and wash-house lily are some of the popular common names of the plant.

The genus name Hemerocallis, is derived from two Greek words, hemeros, meaning ‘day’, and kallos, meaning ‘beauty’, referring the beautiful flowers that only last one day. The species name, fulva, refers to the colors – deep yellow, orangish, or tawny. All parts of the daylily are edible, and plants have been cultivated for thousands of years in Asia for food. Buds or new flowers are frequently cooked and eaten in China and Japan. In addition, the rhizomes can be chopped and cooked like potatoes, and are said to be as sweet as sweet corn. The tuberous roots have a nutlike flavor, and can be eaten raw or roasted. Young shoots have been prepared like asparagus, but consumption should be avoided.

Orange Daylily is an herbaceous clump-forming perennial deciduous plant that normally grows about 2 to 4 ft. (0.6 to 1.2 m) tall with fleshy globose-ellipsoid, swollen, tuberous part near tip and stolon. The plant is found growing in forests, thickets, grasslands, stream-sides, meadows, floodplains, ditches, forest edges, cemeteries and cemetery prairies, woodland borders, areas along railroads and roadsides, sites of abandoned homesteads, and old flower gardens. The plant develops rhizomes (horizontal underground stems) and fleshy, tuberous, spindle-shaped roots, with thinner, fibrous roots growing from both to form a dense system. Stems are smooth, round, leafless and branched at the top, growing 2 to 4 feet tall (sometimes up to 6 feet). A few small, leaf-like bracts may develop in the upper portion of the stem.

Sword-like leaves are arranged in pairs and grow only at the base of the plant. The leaves are 50–90 cm long and 1–2.8 cm broad, narrow, smooth and slightly folded, with a central ridge running lengthwise down the back of the leaf. There are no leaves on the scape, but there may be several small leafy bracts.

The inflorescence is terminal cluster of long stalked flowers (a cyme) atop the scape. The cluster can produce as many as 10 to 20 flowers, but only one open at a time. Branching occurs within the inflorescence, not below on the scape. Flowers are orange and quite large, spanning individually about 3½ inches across. They are held semi-erect or horizontally on the stalks, rather than hanging downward. Each flower consists of 6 orange tepals (3 petals and 3 sepals that are similar in appearance) that are united at the base, but spread outward and backward toward their tips. The 3 inner tepals are somewhat broader than the 3 outer tepals. The margins of each tepal are rolled. The throat of the flower is yellow, around which there is a band of red, while the remainder of the flower is some shade of orange. Exerted from its center, there are 6 long stamens and a single style. Buds of the flowers are green to greenish orange, oblong, and up to 3 inches long. The blooming period occurs between June to August and lasts about a month. Each flower lasts only a single day, hence the common name.

Fertile flowers are followed by 3-lobed cylindrical capsule seed consists of rows of black seeds. However, these seeds are infertile because the Orange Day Lily is a sterile hybrid. This plant often forms vegetative clumps of plants that exclude other species. 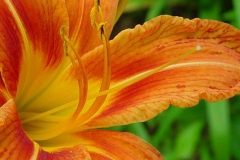 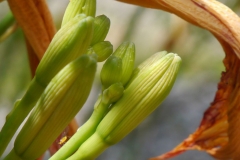 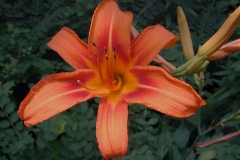 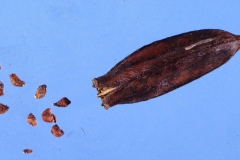 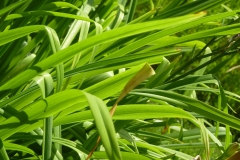 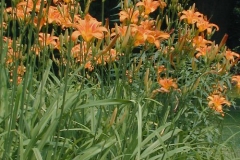 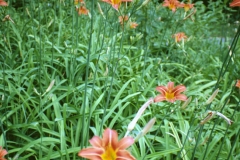 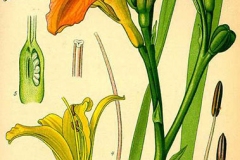 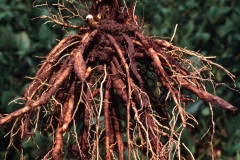 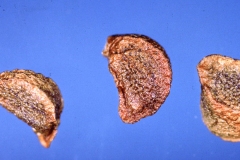 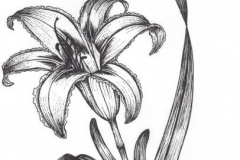 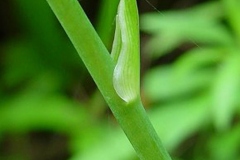