Trending
You are at:Home»Fruits»Paper mulberry facts and uses 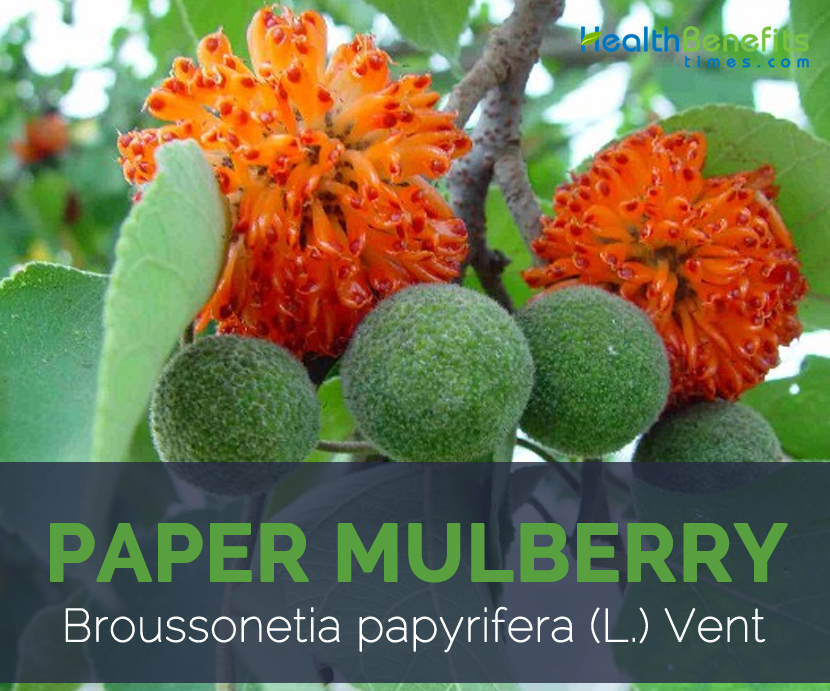 The paper mulberry scientifically known as Broussonetia papyrifera, syn. Morus papyrifera L. is a species of flowering plant in the family Moraceae and like all members of that family it has sticky, milky sap. It is native to Asia, where its range includes China, Japan, Korea, Indochina, Burma, and India. It is extensively cultivated elsewhere and it grows as an introduced species in parts of Europe, the United States, and Africa. Apart from paper mulberry other common names include tapa cloth tree and pulp mulberry. It may be confused with the exotic white mulberry and native trees such as red mulberry, sassafras, basswood, and white poplar. It is important as a source of fiber for cloth and paper. Due to their shallow root systems, the trees are susceptible to being blown down in high winds.

Paper mulberry is a medium to large deciduous tree about 10–20 m tall (although exceptionally up to 35 m). The crown is round and spreading. It is a hardy, fast-growing tree and under favorable conditions in a hot, moist climate can attain a height of 21 m and a diameter of 70 cm. It is normally found growing in many subtropical and warm temperate regions and usually prefers sub-humid warm, sub-tropical monsoon climate. Similarly it requires moist, well-drained soil and has been unsuccessful when tried on poor soil. It prefers sandy loams and light soils. Stiff clay and hard laterite soils prevent penetration of the roots to the sub-soil, resulting in stunted growth. Its stout, grey-brown, spreading branches are brittle and susceptible to wind damage. The branches are marked with stipular scars. Young branchlets are subtomentose and shoots are pubescent when young. The bark is light-grey, smooth, with shallow fissures or ridges. The stem, branches and petioles contain milky latex.

Paper mulberry has variable mulberry-like papery leaves. Some leaves are distinctly deep lobed, while others are unlobed. Several different shapes of leaves may appear on the same shoot. The leaves are alternate/subopposite, ovate, acuminate, dentate-crenate, their bases often oblique, scabrous above, with a woolly surface on the lower side. The leaves are 9.7 x 6.6 cm in size. The petioles are 3-10 cm long and the stipules 1.6-2.0 cm long.

Flowers of Paper mulberry occur in elongated, male spikes up to 8 cm (3.2 in) long and female axillary globose heads up to 2.5 cm (1 in) long on the separate male and female trees (although all trees in the tropical Pacific islands are apparently male.) Female flowers have two to four lobed perianth and a superior ovary with a filiform style. Male flowers have four valvate tepals and four free stamens with filaments inflexed in the bub. Flowering is unknown or infrequent over most of the tree’s distribution in the Pacific. Male flowers are normally yellowish white whereas female flowers are orange colored.

Paper mulberry can be used as a food for both human and animal consumption. The flowers and young leaf of the variety Brussonetia kurzii has a protein content of 16-21%, together with nutrient minerals such as P, K, Ca and Mg and is suitable for human consumption. The fruit comprises a ball about 1.5 cm in diameter with numerous small edible fruits protruding-there is not much edible flesh but it has been reported to have a lovely flavor.

The leaves are used for feeding silkworms as well as pigs.

It has been known for almost 1500 years as a plant whose bark can be used to make paper of various grades up to the highest quality. The inner bark (bast) fibers is used for tapa (cloth) in the South Sea Islands while in Japan, Thailand, Myanmar, Indonesia it is used for special paper making, such as paper napkins, lens paper, cosmetic tissue and luxurious hand-made paper. The male flower spikes of Artocarpus atilis are blended with fiber of paper mulberry to make elegant loin cloths.

The wood is light-colored, soft, greyish-white, even and straight grained. It is light, with a basic density of 506 kg/m3. The timber from B. papyrifera, being soft and brittle, is used mainly in the manufacture of cheap furniture, match sticks, packing cases, boxes, plywood, building-boards, sports equipment and pencils.

The tree produces a natural green to yellow-green dye.

It is said to be astringent, diuretic, tonic, vulnerary. The leaf juice is diaphoretic and laxative. The leaves are used for blood sputum, vomiting blood, uterine bleeding, excess menstrual bleeding, bleeding wounds in Chinese medicine and for a bleeding stomach in Hawaii.

Paper mulberry has properties of a pesticide where Helicoverpa armigera restricted in its pupation and adult emergence after feeding on B. papyrifera leaf powder. The xylem also contains an antifungal substance.

Paper mulberry starts itself quickly on denuded and degraded sites in the form of a thick tree cover, fixing soils and preventing further erosion due to its dichotomous root system.

It’s a good shelterbelt and windbreak

Paper mulberry belongs to the fig family, Moraceae, and like all members of that family it has sticky, milky sap. Paper mulberry is important as a source of fiber for cloth and paper. Due to their shallow root systems, the trees are susceptible to being blown down in high winds. The tree crown is broad and rounded; with wide-spreading branches Paper mulberry is a fast-growing tree, which often produces suckers from its roots. It is grown in many subtropical and warm temperate regions. It will grow on any well-drained soil, and performs best in a sheltered place in full sun. In India, leaves are shed between September and January and the new leaves appear in February or March. On average, the trees are leafless for one to three months. The flowers appear in March-April. The fruit ripens in the rainy season from July to September.