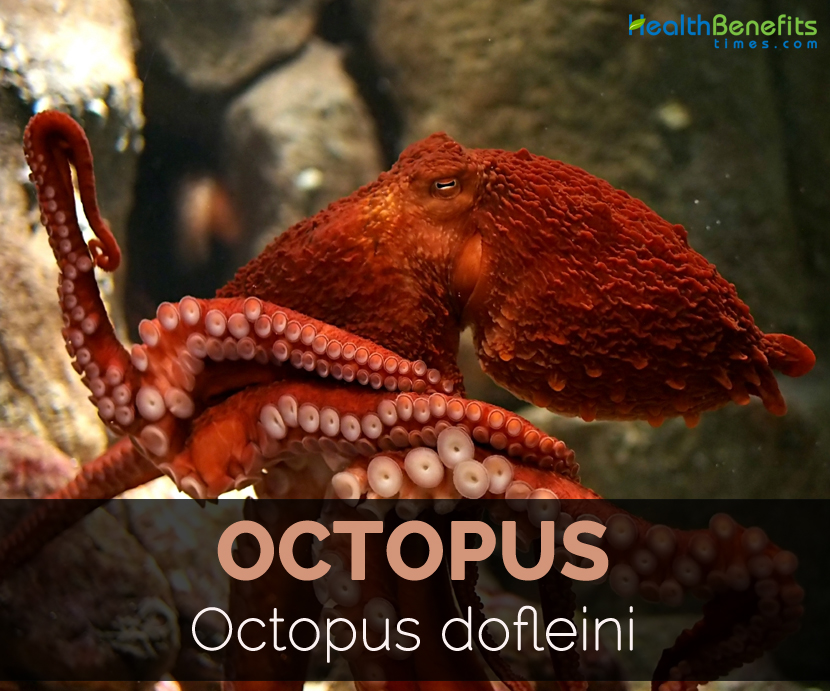 Octopus dofleini (genus Enteroctopus) are the octopus species which are found in rocky areas, kelp forests and caves in the Pacific Ocean. It could be identified reddish brown or dark red skin. They have eight arms of 6 feet with each arm having 280 suckers. The center of the arms consists of beak and radula which is a toothed tongue. The body is compressible and 9.6 m in radius. It is cool-blooded or poikilothermic having three hearts and blue blood. Mantle is spherical that consists of major organs of this animal. Octopus is able to change the skin’s color by adapting the environment due to the presence of tiny pigments called chromatophores. It prefers cold and oxygenated water. They hunt shrimp, scallops, crabs, clams, moon snails, abalones, small octopus, flatfish, rockfish and sculpins for the food. It is the prey for seals, dogfish sharks, sea otters, man, lingcod, sea lions, seals, sea otters, larger octopuses and fish. It has lifespan of 4 to 5 years. Other common names of Octopus dofleini are North Pacific giant octopus, Giant Pacific octopus, Giant octopus, Poulpe géant and Pulpo gigante.

It is usually found in the Pacific Ocean. It was recorded in Alaskan Aleutian Islands and Baja California. It is extended in Northeast of Japan. The name octopus was kept by Ancient Greeks which means eight foot. It was illustrated on Minoan and Cretan coins and painted on jars in Mycenaenera. Around 300 million years ago, the ancestors of octopus were on Carboniferous seas. The oldest fossil of octopus was found in Chicago of Field Museum. It is distributed to coastal North Pacific in Washington, Oregon, California, Alaska, British Columbia, Northern Japan, Russia and Korea.

Octopus does not have hard shell and belongs to mollusk family which also includes oysters, mussels, clams, nautilus and squid. It is vital in Mediterranean dishes and regarded as delicacies. It has high content of Omega-3 fatty acids that helps to lower the chances of stroke and heart attack. It promotes the cardiovascular health and stimulates cognitive health. It has low content of saturated fat which assists in losing weight.

The deficiency of Vitamin B12 is the cause for breast cancer. It could be prevented by the intake of food rich in vitamin B12. (1)

Iron is vital for the hemoglobin formation. It helps to provide the shade of red to the blood. It assists to transport oxygen to the cells of the body. As human beings lose blood in injuries, the extra hemoglobin is essential. During menstruation, women lose blood so they have high chances to suffer from anemia. (2) (3)

Copper is vital for the growth of the body. It helps to prevent nervous, skeletal and cardiovascular systems. The deficiency of copper obstructs in the oxygenation of red blood cells. (4)

Protein is essential to maintain the healthy hair and also to prevent from damages. The study shows that protein has vital role in the growth of hair.  Due to these benefits, it is used for the production of conditioners. (5) (6)

Vitamin B6 controls the fat level found in the human heart. That helps to prevent various cardiac problems. It also prevents the formation of kidney stones and maintains the good shape of kidneys. (7)

Niacin assists in the functions of converting the carbohydrate, proteins and fats into energy. (9)

Vitamin B5 helps to treat mental ailments such as depression, anxiety and stress. It stimulates the mind fitness and regulates hormones that cause these conditions. (10)

The supplements of magnesium help to lower the attacks and severity of migraine along with the reduction of recurrence. (11)

It is essential to maintain balance in blood pressure. It lowers the chances of hypertension and heart ailments. It has vasodilator properties which provide relief from the tension of blood vessels. (12)

They are soft bodied with no bones. The mantle of bag shaped consists of internal organs and has the color of reddish brown. The head is huge and bulbous and colors from reddish to brown. They have got eight arms with each having 280 suckers having thousands of chemical receptors. It also has special pigment cells in the skin that assist them to change their color as well as textures. It fusions well with plants, corals and rocks. They usually hunt at night. When it is threatened, it releases purple to black ink to escape from predators. Female lays about thousands of eggs which breed for almost six months.