Trending
You are at:Home»Fruits»Health benefits of Partridge Berry 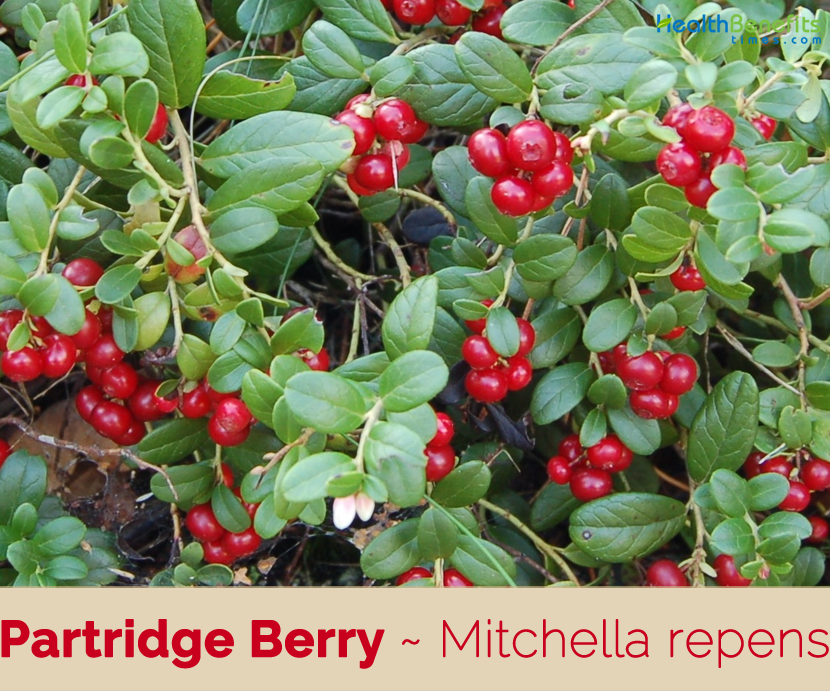 Mitchella repens commonly known as partridgeberry, or Squaw Vine, is the best known plant belonging to the madder family (Rubiaceae). The plant is native to eastern North America. In Missouri, it is native to sandy soils around bluff ledges, bogs and stream banks and in low moist woods in the southeastern part of the state (Steyermark). Some of the popular common names of the plant are two-eyed berry, running fox, Partridgeberry, Twinberry, Squaw Vine, Deerberry, One-berry, Winter Clover, Squawberry and Squawvine. Genus name honors John Mitchell (1711-1768), physician of Virginia, born in Lancaster County, who was a correspondent of Linnaeus. Specific epithet means creeping.

The small, trumpet-shaped, axillary flowers are produced in pairs, and each flower pair arises from one common calyx which is covered with fine hairs. Each flower has four white petals, one pistil, and four stamens. Partridge Berry is distylous taxa. The plants have either flowers with long pistils and short stamens (long-styled flowers, called the pin), or have short pistils and long stamens (short-styled flowers, called the thrum). The two style morphs are genetically determined, so the pollen from one morph does not fertilize the other morph, resulting in a form of heteromorphic self-incompatibility. The blooming period occurs from late spring to mid-summer and the flowers are fragrant. Flowers are subsequently followed by round, bright red berries that are ¼ to 3/8 inches across and typically ripen in late summer. Single fruits normally contain eight seeds. A pair of flowers yields one berry, hence the additional common name of twin berry for this plant. Berries are edible, but rather tasteless. Berries often persevere on the plants throughout winter. Seeds start ripening from July and October.