Trending
You are at:Home»Fruits»Facts and Benefits of Paw Paw 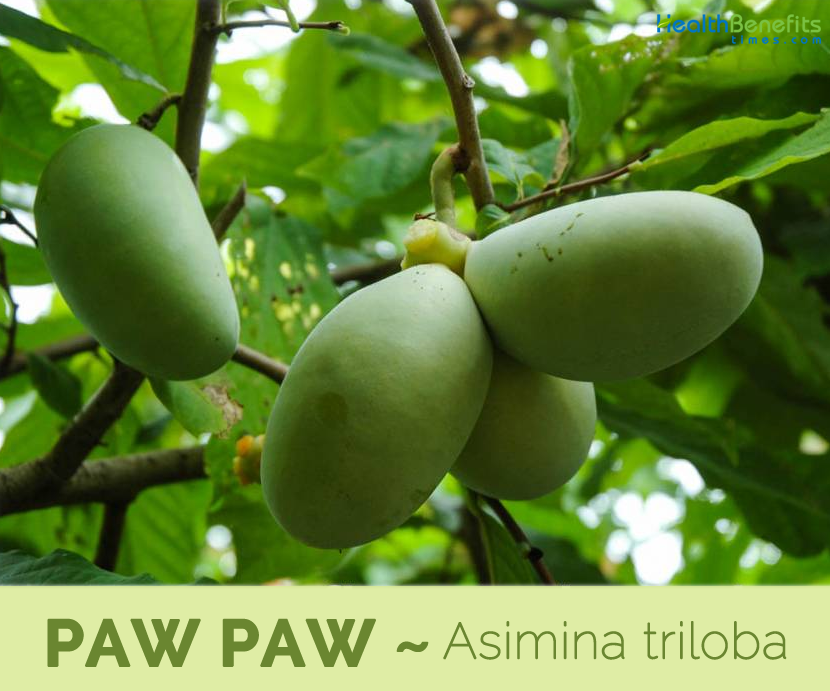 Pawpaw fruit can be consumed by humans, although handling the fruit may cause allergic reactions in sensitive individuals. The fruits can be eaten raw, cooked in puddings or breads, or used to make ice cream. Normally it is planted for fruit production and as an ornamental plant. Early Americans made a yellow dye from the pulp of the ripened fruit. The paw paw is the largest edible fruit indigenous to the United States.

Pawpaw is a deciduous, often narrowly conical tree or large shrub that grows about 35 feet (11 m) (rarely to 45 feet or 14 m) tall with trunks 8-12 inches (20–30 cm) or more in diameter. The plant is found growing in moist to mesic deciduous woodlands and small woodland openings. It can often be found in the vicinity of fallen trees, where there is more light. The plant does best in deep, fertile soil that is moist, well-drained and slightly acid (pH 5-7). Avoid heavy, wet, alkaline soil. Barks are smooth when young and develop shallow fissures with age. It is brown to grayish-brown and is blotched along with light brown, branchlets that are tinged with red, marked by shallow grooves.

Leaves are simple, alternate and spirally arranged, entire, deciduous, obovate-lanceolate, 10-12 inches (25–30 cm) long, 4-5 inches (10–13 cm) broad, and wedge-shaped at the base, with an acute apex and an entire margin, with the midrib and primary veins prominent. The petioles are short and stout, with a prominent adaxial groove. Stipules are lacking. The expanding leaves are conduplicate, green, covered with rusty tomentum beneath, and hairy above; when fully grown they are smooth, dark green above, and paler beneath. When bruised, the leaves have a disagreeable odor similar to a green bell pepper. In autumn the leaves are a rusty yellow, which make spotting pawpaw groves possible from a long distance.

Flowers are perfect, about 1-2 inches (3–5 cm) across, rich red-purple or maroon when mature, with three sepals and six petals. They are borne singly on stout, hairy, axillary peduncles. The flowers are produced in early spring at the same time as or slightly before the new leaves appear, and have a faint fetid or yeasty smell. Flowering normally takes place from May to June.

Fruit of the pawpaw is a large, yellowish-green to brown berry, 2–6 in (5–16 cm) long and 1–3 in (3–7 cm) broad, weighing from 0.7–18 oz. (20–500 g). The larger sizes will appear desirable, similar to the mango.  The fruit consist of about 10 to 14 seeds in two rows. Brownish to blackish seeds are shaped like lima beans with 1/2 to 1 in (15–25 mm) in diameter surrounded in the orange colored soft, edible fruit pulp. The conspicuous fruits are initially green, maturing to yellow or brown. When mature, the heavy fruits bend the weak branches down. Pawpaw fruits often occur as clusters of up to nine individual fruits. The ripe fruit is soft and thin skinned. Fruits mature from September or October.

Hernando de Soto, the Spanish explorer, was the first European to observe Native Americans both cultivating and eating pawpaw fruit in 1541. Prior to the last Ice Age megafauna like the mastodons were responsible for dispersing its seeds. After the Ice Age it is believed that Native Americans were the biggest dispersers of the seed. Besides eating pawpaw fruit, Native Americans also harvested the fibrous inner bark of the trunk. By twisting these fibers the Native Americans created cords, ropes, fishing nets, baskets, mats and cloths. Parts of the plant also have an insect repellant property. Native American ground up the seeds and created a powder which they applied to their scalps to control lice. Nowadays it is grown worldwide because of its usefulness and its amazing benefits.

Cultivars and their differences

Pawpaw fruit is a product of the North American shrub known scientifically as Asimina triloba. The plant is a genetic relative of the more commonly known papaya fruit, which grows in tropical climates. The majority of their nutrients are in the fleshy interior and seeds, but the skin can also be used medicinally, as can the plant’s leaves, bark, and even roots.  Listed below are few of the known health benefits of using Pawpaw

Anti-inflammatory properties of pawpaw plant make most parts of it good natural treatments for inflammatory disorders such as rheumatoid arthritis and osteoarthritis. Regular consumption of the oils in the fruit and leaves can help relieve the inflammation and pain related with arthritic conditions. Pawpaw also helps to treat common injuries of the joints and muscles.

Squeeze some yellow pawpaw leafs in water. Take a glassful three times daily for seven days. This preparation is also good for jaundice. The dosage is the same.

The green leafs of pawpaw are good for diabetes-induced hypertension. Squeeze the green leaves in water and take a glass thrice daily. This preparation is also good for constipation.

Cut a big unripe pawpaw fruit into pieces. Do not remove the peel or seeds. Simply cut the whole fruits into cubes. Then soak in five bottles of water for four days. Filter and take ½ a glass thrice daily for 2 weeks. This is a very good remedy for any type of intestinal ulcer.

Practitioners of natural medicine occasionally recommend pawpaw for the relief of respiratory problems, but in these cases the biggest benefit often comes through inhaling the plant rather than eating it or using it topically. Asthma sufferers may find relief during an asthma attack by inhaling the smoke produced by burning dried pawpaw leaves.

Pawpaw is often regarded as something of a “miracle” treatment for people suffering from harsh skin conditions such as acne and eczema. Patients usually rub concentrated pawpaw creams and extracts on their skin to get the best results, though sometimes simply rubbing the fruit skins on the affected areas can bring relief. Pawpaw oil has also been shown to reduce cellulite, and can firm and smooth the skin by stimulating the production of collagen.

Root of the pawpaw is a good remedy for respiratory problems especially bronchitis. Bring some pawpaw roots to boil and take ½ a glass thrice daily. For cough, simply chew a tender pawpaw root and swallow the juice.

Pawpaw root is effective for the cure of piles. Prepare as for bronchitis. The dosage is half a glass twice daily.

Pawpaw has a number of natural insecticidal properties and has been proved to be an effective alternative for elimination the body of parasites. People who suffer from intestinal worms can chew on pawpaw seeds to expel the parasites. Shampoos containing an extract from the pawpaw plant are sometimes also recommended for patients with lice and nits.

Pawpaw plant is rich in natural compounds that contain cancer-fighting properties. Research has suggested that extracts of the pawpaw plant can considerably reduce tumors in cancer patients. It also can alleviate the nausea and other side effects of chemotherapy. Animal research have also shown that the plant’s chemical compounds can be effective in lowering blood sugar levels as well as lowering cholesterol, which in addition to improving overall health might also help relieve a number of internal ailments and can be helpful when it comes to preventing heart attack, stroke and arteriosclerosis.

14. For chronic external ulcers or sores

Cut a piece of unripe pawpaw fruit and tie directly to the wound. Do this four times daily. Continue till the wound has dried, which will be in few days or weeks. To make the wound heal faster, eat plenty of ripe pawpaw.

Vitamin A is good for eyesight, Vitamin B for the nerves and muscles while Vitamin C strengthens the immune system and helps fight against illnesses. For worms, chew 2 tablespoons of the seeds of ripe pawpaw fruit first thing on rising and last thing at night. Do this for 3 days. Take only fruits for breakfast and supper for those three days.