Trending
You are at:Home»Fruits»Pokeberry – Phytolacca Americana 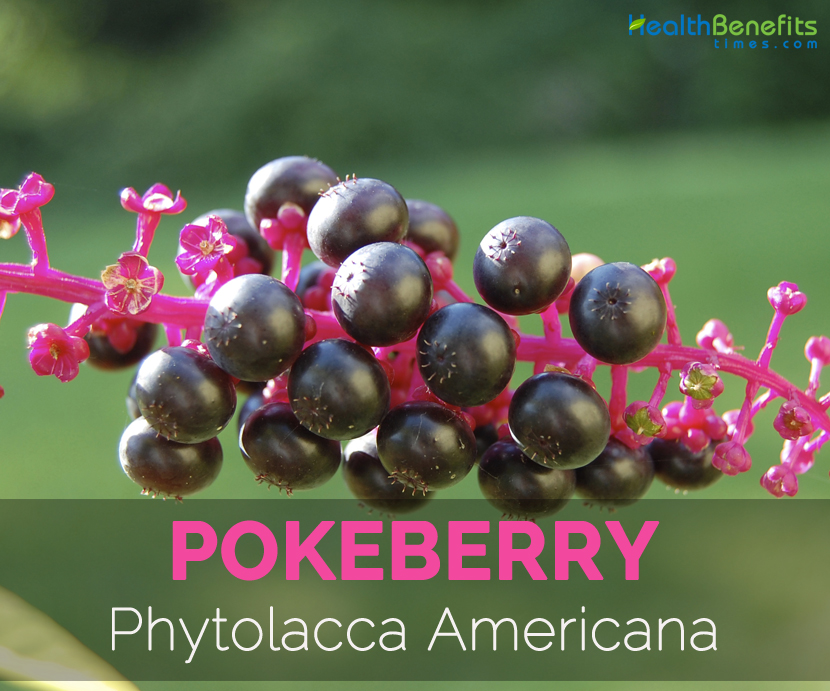 Phytolacca Americana, American nightshade, cancerroot, cancer jalap, coakum, chongras, crowberry, pokeberry, inkberry, garget, poke, pigeonberry, scoke, red ink plant, is an herbaceous plant with berry like fruit, native to Eastern United States where it prefers damp soils. Bunches of small, glossy, dark purple fruit develop on the stems which mature during August – November. Pokeberry should not be consumed raw as it is highly toxic. The cooked berries are safe to make pies. The juice extracted from the Pokeberries is used to enhance the color of wines.

It is an herbaceous perennial plant that can grow to 2-12 feet in height. The fleshy taproot is large, thick and coarse with 4-6 inches as a diameter. The stems are stout and erect which varies in color from green, red, pink or purple up to 3-7 feet high. The leaves are alternate, lanceolate to nearly ovate; 3½-20 inches long and 1½-5 inches wide. The flowers are symmetrical, green or white-pink which is about ¼-½-inch wide. The fruit is rounded, slightly flattened, purple-black; ¼- ½ inch wide and 0.25 inch (0.6 cm) in diameter. The seeds are black, round, flattened and 1/8 inches wide.

Pokeberry is used as a medicine for arthritis, mumps and other various skin conditions. The roots are used as an anti- inflammatory, expectorant, narcotic, hypnotic, cathartic and purgative. The root helps to treat chronic catarrh, swollen glands, immune diseases and bronchitis.

The study has shown that the high intake of Vitamin C reduces the appearance of wrinkles, skin dryness and slows down the aging process. Vitamin C is essential for the tendons, skin, blood vessels and ligaments. It also assists the healing of wound and forms a scar tissue.

The evidence has shown that the cream with vitamin c reduces the skin redness. The healthy skin could be maintained by adding foods high in antioxidants which also prevent the skin cancer.

Vitamin A helps to neutralize the free radicals which damage the cells and tissue. It also prevents the cells from being overactive.

Vitamin A has antioxidant properties that neutralize free radicals in the body that cause tissue and cellular damage. Vitamin A can prevent the cells from becoming overactive. The intake of Vitamin A also reduces the risk of food allergies as it prevents the dangerous overreaction. It also reduces inflammation, chances of neurodegenerative diseases such as Parkinson’s disease and Alzheimer’s disease.

Anemia is caused due to the low production of red cells, insufficient delivery of oxygen to the blood and blood loss. Vitamin B2 is essential for the production of red blood cells and steroid hormone synthesis. The deficiency of riboflavin increases the chances of sickle cell anemia and anemia. The deficiency of Vitamin B2 results in shortness of breath, fatigue and inability to exercise. The research shows that Vitamin B2 helps to reduce and maintain homocysteine in the blood.

The deficiency of iron during pregnancy increases the chances of premature birth and underweight newborn. The prematurely born are more prone to the health problems, delay growth as well as cognitive development. So it is advised to eat more iron rich foods to the pregnant women. The study shows that those who intake high amount of iron, the chances of low birth weight newborn was reduced by 8.4%.

Copper is essential for the thyroid function because it works with the minerals such as calcium, zinc and potassium which are required for maintaining the balance in thyroid activity and also prevents hyperthyroidism. The thyroid sufferers’ results in weight gain or loss, fatigue, chance in appetite and body temperature due to the excessive presence of these minerals or deficiency exists.

Vitamin B6 controls the level of homocysteine which is the cause for heart disease and damage of neurons. It also assists in controlling energy, mood as well as concentration. Vitamin B6 may be helpful in improving the learning and behavior disorders in children.

The deficiency in nutrients and poor diet are the causes for many eye ailments. The studies have shown that the intake of Vitamin B6 with folate and other vitamins can assist in preventing vision loss and eye ailments. It also prevents the age related eye diseases such as macular degeneration.

The presence of adequate thiamine is required for the production of acetylcholine which helps to transfer the messages between nerves and muscles. Heart is one of the muscles that rely on these signals.

The nerves and muscles should be able to use the energy properly in order to maintain the proper cardiac function and healthy heart beats. The recent studies have shown that Vitamin B1 helps to counteract various heart diseases as it maintains the healthy functions of ventricles and also treats heart failure.

Phosphorus helps in the absorption, synthesize and use of minerals from the food such as niacin and riboflavin. It helps in the production of energy, cellular function, growth and reproduction. In addition to that phosphorus assists healthy metabolism as well as fat and carbohydrate digestion with the production of digestive enzymes that converts the nutrients into the usable energy. It also keeps the mind alert and activates muscles by stimulating glands to secrete hormones which are required for the energy expenditure and concentration.

The plant known to us as the pokeroot is known to the Native Americans as the pocon plant. Traditionally, the herbal remedies made from the pokeroot have been essentially utilized in two ways; it is used as an herbal emetic, and also as a topical herbal remedy for the treatment of skin diseases affecting various patients. The pokeroot is a derivative of the herb called by the botanical name: Phytolacca americana L. belonging to the plant family Phytolaccaceae. Many holistic forms of treatment make use of the herbal pokeroot remedies as the herb is useful in a wide range of conditions and is an effective addition to many herbal treatment strategies.

Pokeroot is another controversial herb that is known both for its benefits and side effects. Poke weed can be mostly seen in North America, South America, New Zealand and in parts of Asia. Poke root is considered a slow emetic and purgative. The herb is known for its anti-inflammatory properties and is a popular cure for chronic rheumatism and skin diseases. However, there are many unconfirmed accounts describing the poisonous nature of the herb. The following are some of the health related benefits of Poke root:

Roots of the Poke herb are used in the form of decoction to treat respiratory disorders. Pokeroot has been used to treat pharyngitis and dyspepsia. The herb works by reducing inflammation of the respiratory tract and mucous membranes.

Pokeroot is also used to reduce internal and external inflammatory conditions. For example, the herb reduces inflammation of the mucous membrane. It can also be applied topically to reduce the pain and swelling allied with rheumatoid arthritis. Pokeroot also helps in reducing inflammation of the mammary glands and sore throat issues.

Roots of the Pokeweed are also used to strengthen the immune system. Many say that the herb can be used as a medication for treating AIDS. Research has shown that the herb has the ability to interact with proliferating T cells. The presence of Pokeweed antiviral protein also known as PAP in the herb was highlighted in a scientific study. It was shown that PAP has some very promising medicinal actions that can be used against HIV.

Poke root is also known as cancer root. The new name given to the herb may be due to speculation about its cancer fighting properties. Pokeroot is also specifically associated with the treatment of uterus and breast cancer.

Pokeroot is known for its ability to cure various forms of skin conditions such as skin ulcers, skin rashes, fungal infections, acne, infected breasts and eye conditions like conjunctivitis.

Poke root is used to remove uterine fibroids in women. The herb also helps in reducing the symptoms of PMS. Due to its anti-inflammatory properties, the herb can be used to reduce breast pain in women. To reduce menstrual pain, pokeroot extract can be mixed with any oil and rubbed on the belly.

7. Helps with aches and pains

Poke root is known to reduce soreness, restlessness and aching. This is due to an inability to eliminate toxins which sit in the muscles of the body. By allowing the lymphatic system to work more effectively we can expel these toxins and thereby reduce the aches and pains. It has been known to reduce arthritis and swelling of joints.

Native American tribal healers use the roots of the herb to purify the blood and to reduce fever & pain. The herb is also associated with the treatment of the following medical conditions – mumps, constipation, dysmenorrhea, chronic infections, leucorrhoea, headache, syphilis and catarrh.

Traditional uses and benefits of Pokeroot

Poke root should not be used medicinally by the young and nor should it be taken whilst pregnant or during breast-feeding. Excess doses of Poke Root may harm the liver and the kidneys and do lasting and severe damage to the nervous system. This is an herb that should only be prescribed by a qualified herbalist who is experienced in its safe use.