Trending
You are at:Home»Vegetables»Sweet peppers facts and health benefits 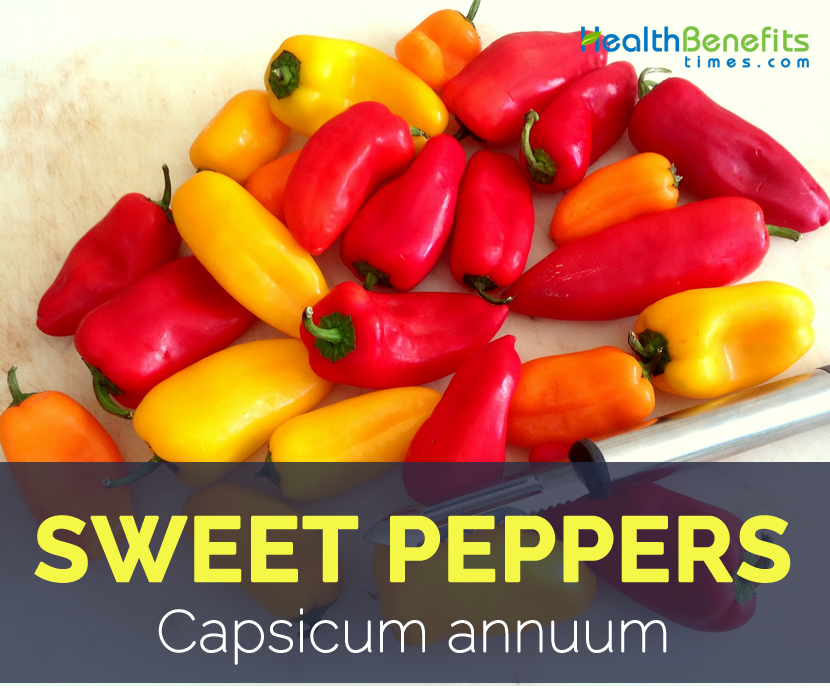 Sweet peppers and chilies are both derived from the same species, Capsicum annuum. The pepper plant is a member of the Solanaceae or “nightshade” family, which also includes tomatoes and potatoes. It is originally from South and Central America and was introduced into Europe for the first time at the beginning of the 16th century. Botanically, peppers are a fruit of Capsicum plants. However, in the culinary world, people recognize peppers as a vegetable. Nearly 2,000 varieties of peppers are cultivated worldwide. They are commonly grouped into two categories: hot (chili) and sweet peppers. It is also known as capsicum, kampana, lara, African Pepper, Bell Pepper, Capsicum Pepper, Cayenne, Cayenne Pepper, Cherry Pepper, Chili, Chili Pepper, Chilli, Chilly Pepper, Chitlepin, Christmas Pepper, Cone Pepper, Green Capsicum, Green Pepper, Halapenos, Hungarian Pepper  and is the most widely used condiment all over the world. It is consumed fresh, dried or processed. Sweet pepper is a warm and dry season crop.

Sweet pepper plant offer sweet pepper that differ greatly in color, shape and size according to various varieties. Sweet peppers are often green or red in color, but sometimes also yellow, white, purple or black. Sweet berry is actually a berry, pericarp fleshy and firm, hollow, pendent up to 15 cm and are green while young and turns to red orange, yellow, white, brown or purple when mature. The inside of a sweet pepper is hollow and subdivided by partitions, to which the seeds are attached. The outside of the sweet pepper comprises a very shiny skin. Seeds are normally pale yellow, discoid or reniform, 3–5 mm across. Sweet pepper has mild, sweet flavor and wonderful taste due to which it is found used in a variety of food items throughout the world.

Sweet peppers (Capsicum annuum L.) are considered to have originated from central and South America where several species were used centuries before Columbus landed on the continent (Manrique, 1993). The cultivation of peppers spread throughout Europe and Asia after the 1500s. Later it was introduced all over the world where it is extensively grown as a spice and medicine. Today, it can be found growing in tropical and temperate areas around the world.

Several researchers have discovered that high consumption of fresh vegetables and fruits have a link to minimized chances for various types of cancer. Research have also shown that increased consumption of vitamin C rich foods like sweet pepper is related with a reduced chance of cancers of the lungs, mouth, vocal chords, throat, colon, rectum, stomach, and esophagus. Sweet pepper consists of 119.8 mg of Vitamin C which is 133.11% of the daily recommended value. Regular consumption of sweet pepper is extremely beneficial for preventing several types of cancers.

Sweet pepper consists of considerable amount of vitamin B6  which is essential to create hemoglobin in the blood, that is transported by red blood cells throughout the body to help bring oxygen to cells and to mobilize iron. Anemia results when body doesn’t make sufficient amount of red blood cells, leading to symptoms like fatigue, aches and pains, and more. Several researches show that consuming plenty of vitamin B6 rich foods like sweet pepper can help lower symptoms of anemia and prevent it from occurring in some instances. Sweet pepper consists of 0.334 mg of vitamin b6 which is 25.69% of the daily recommended value.

The health benefits of copper relate to its anti-inflammatory actions that assist in reducing the symptoms of arthritis. Sweet Pepper consists of 0.098 mg of copper which is 10.89% of the daily recommended value. Market is also flooded with copper bracelets as well as other accessories for curing this condition. Copper can also work as a home remedy for arthritis; store water in a copper container overnight to gathers copper traces. These are beneficial in strengthening the muscular system, so drink the water when you wake in the morning. You will feel energized and active for the day, because your metabolism will have a good source of copper for its daily processes. Therefore copper rich foods are essential for solving arthritis problem.

Sweet pepper consists of ample amount of vitamin K which helps to increase the amount of a specific protein essential to maintain bone calcium, reducing the chance of osteoporosis. Several researches on vitamin K have even found that high intakes of vitamin K can stop bone loss in people with osteoporosis. Body needs vitamin K to use calcium to build bones. Sweet pepper consists of 9.17% of vitamin k which is the daily recommended value. Several evidences prove that vitamin K can improve bone health and decrease the risk of bone fractures, particularly in postmenopausal women who are at risk for osteoporosis.

Manganese is found considerably in sweet pepper that plays an important role in brain functioning. It is considered that regular consumption of manganese can aid in controlling epilepsy attacks. The exact role of manganese is not known in epilepsy. However many people believe that manganese helps in relaxing blood vessels. Hence, the chance of epilepsy attacks is reduced. Sweet pepper is one of the best options for manganese because it consists of 0.182 mg which is 7.91% of the daily recommended value.

Several research studies have shown that vitamin B1 is helpful to people suffering from Alzheimer’s disease. This is due to the fact that vitamin B1 mimics a neurotransmitter which is important for memory. It is supposed that any older individuals with memory problems may benefit from adding vitamin B1 rich food like sweet pepper to their dietary intake. However, before adding any dietary supplements, it is always best to check with your medical professional to make sure they are safe for your particular situation and will not contraindicate with any of your prescribed medications. Sweet Pepper is one of the best sources of vitamin B1 which is essential to fight off Alzheimer’s disease.

Dietary fiber present in sweet pepper is one of the best options to normalize bowel movements by bulking up stools and making them easier to pass. It can help relieve and avoid both constipation and diarrhea. Consuming plenty of fiber can reduce your risk for diverticulitis (inflammation of the intestine), hemorrhoids, gallstones, kidney stones, and provide some relief for irritable bowel syndrome (IBS). Some researchers have also indicated that a high-fiber diet may help to lower gastric acid and reduce your chance for gastro esophageal reflux disorder (GERD) and ulcers.

Iron deficiency is one of the main causes of the restless leg syndrome. Several researches on this syndrome have focused on iron. Lower level of iron in the blood is a major cause and hence proper intake of iron supplements in required levels as per doctor’s consultation can cure this problem. Regular consumption of iron rich sweet pepper is one of the best cures for this problem because sweet pepper consists of 0.51 mg of Iron which is 6.38% of the daily recommended value.

Muscle cramp is one of the most common sign for potassium deficiency. If you experience muscle cramps in muscles that haven’t been pushed to their max, you may need to put some attention on your potassium intake. Muscle cramps are not be a huge problem, but preventing them with potassium is easy enough. Muscle cramps and twitches are early sign that your potassium levels are low. Take action to correct this imbalance and you should see an improvement in symptoms. Potassium rich foods must be included daily on your diet plan to overcome this problem.

Many people use niacin or niacinamide for treating acne, particularly severe cases of acne that can be very inflamed and painful (called inflammatory acne vulgaris). Sweet pepper has ample amount of Vitamin B3 or Niacin which is extremely beneficial for solving skin related problems.

Vitamin B3 in the form of niacinamide is recommended as a natural treatment for healthy skin and clearing acne when applied to the skin topically, and other people choose to take niacin or B vitamin complex supplements to help their symptoms.

Because niacin helps to reduce skin inflammation, flare ups, irritation, redness, and more, it is also used for treating skin conditions called bullous pemphigoid and granuloma annulare. These are two inflammation-caused skin diseases that involve blistering of the skin which can be very painful and cause infection.

Other traditional uses and benefits of Sweet pepper