Trending
You are at:Home»Herbs and Spices»Important Facts about Porcelain Berry 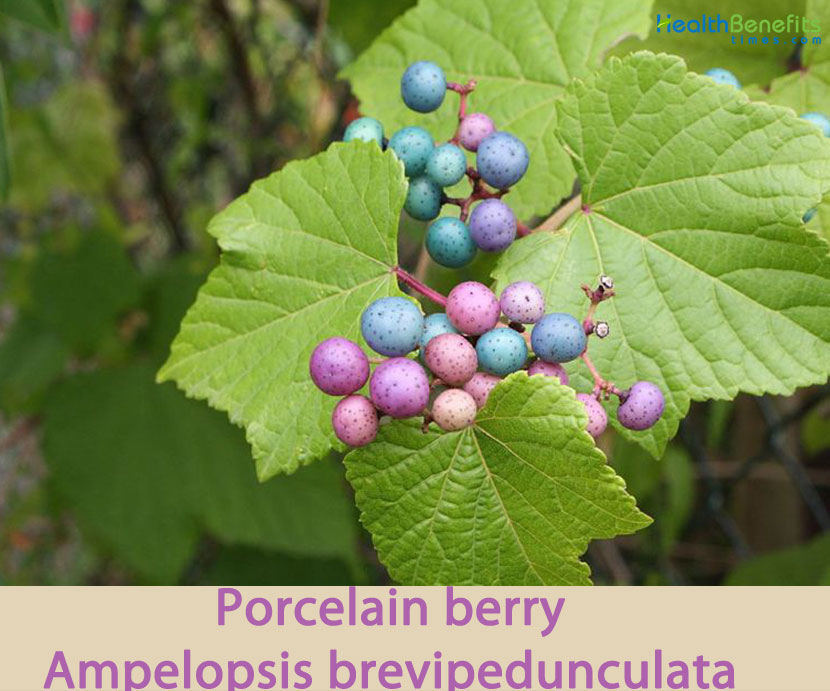 Ampelopsis brevipedunculata, commonly called porcelain vine, is a vigorous, climbing vine belonging to Grape family (Vitaceae). The plant is native to China, Korea, Japan and Russian Far East. Porcelain Berry, Amur peppervine, Blueberry Climber, Porcelain Berry Vine, Creeper, Wild grape and Amur amelopsis are some of the popular common names of the plant. Genus name comes from the Greek words ampelos meaning a vine and opsis meaning likeness. It is closely related to grape vines. Specific epithet means with a short flower stalk. It was originally cultivated as a bedding and landscape plant. In spite of its acknowledged invasiveness, it is still widely used and promoted in the horticultural trade. It resembles grape vines (Vitis spp.) but can be distinguished by flower and fruit clusters of the grapes occur in elongated clusters, while amur peppervine are in rounded or flat-topped clusters with colorful fruit. Amur Peppervine pith is whitish while grapes have darker piths.

Porcelain berry is a vigorous, woody, deciduous, perennial tendril-climbing vine that normally grows about 15-20 ft. tall. The plant is found growing in thickets, forest edges, pond margins, stream banks, thickets, waste places, forest openings, roadsides and riverbanks. It is a hardy species that can adapt to a variety of environmental conditions, growing especially well in moist soils exposed to full sunlight or partial shade. It is however drought-tolerant and adaptable to poor soils of varying pH. In spite of its aggressiveness, it continues to be spread via the horticultural trade. Birds and other small mammals disperse its seeds, and evidence exists that water acts as a secondary method of dispersal. The plant has woody, fibrous, large branched deep taproot. It twines with the help of non-adhesive tendrils that occur opposite the leaves and closely resembles native grapes in the genus Vitis.

Leaves are alternate, simple and heart shaped in outline but variable in form from entire with 1 to 3 tips to those with multiple incised, rounded to scalloped lobes between 3 to 5 prominent whitish veins radiating from the base. Margins are coarsely toothed with distinctive fine whitish hair tips. They are dark green to blue green, shiny above and fine hairy beneath, becoming yellow in fall. New leaves are tiny at branch tips, progressively increasing up to 6 inches (15 cm) long and 4 inches (10 cm) wide. Petioles are 2.5 inches (6 cm) long; light green and hairless, with greatly swollen bases. The plant climbs by tendrils that grow opposite the leaves on the stem.

The perfect flowers are protandrous (anthers open before stigma is receptive), borne in cymes opposite the leaves on peduncles 1-2.5 cm long and pedicels 1-3mm long. There are 5 green sepals. The 5 free greenish-white petals are 0.8-1.8 mm long and ovate-elliptic. There are 5 stamens. The ovary is adnate to an enlarged disk and the style is described as conspicuous, whereas the stigma is inconspicuous. Flowering normally takes place in between July to August. 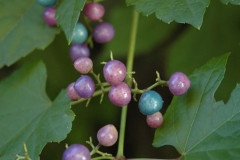 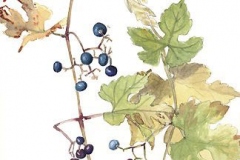 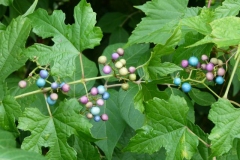 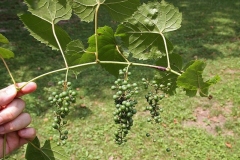 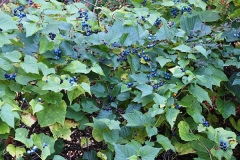 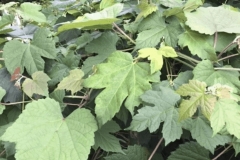 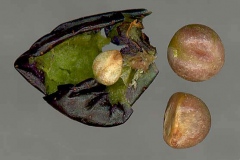 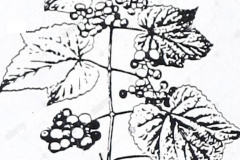 Fertile flowers are followed by clustered drupes, shiny, spherical, to 0.5 inch (1.2 cm) wide, green tipped with a persistent pistil and turning whitish, yellow, purple, turquoise, and porcelain blue (thus the common name), with all colors sometimes present.. Each fruit contains 2-4 seeds and each plant can contain hundreds of berries. The fruits appear in between September and October.

Once porcelain berry is established it is extremely difficult to control, and eradication is doubtful. Recommended control methods for porcelain berry tend to be labor intensive and/or may be slow to show effects. Porcelain berry’s potential for long-range seed dispersal and ongoing intentional planting of it, reviews by make control more difficult.

Fire: No information is available on the use of prescribed fire for porcelain berry control at the time of this publication.

It is commonly argued that the most cost-efficient and effective method of managing invasive species is to prevent their establishment and spread by maintaining healthy natural communities and by monitoring several times each year. Managing to maintain the integrity of the native plant community and alleviate the factors enhancing ecosystem invasibility is likely to be more effective than managing solely to control the invader.

Shading has been recommended as a means for controlling porcelain berry. Planting fast growing trees such as tulip-poplar and red maple, or allowing existing trees to mature, may shade out porcelain berry, provided trees are kept free of its vines. Shading may control porcelain berry best when used as a part of an integrated management plan.

Based on preliminary field testing, Robertson recommended cutting porcelain berry to the ground and treating stumps with herbicide to gain initial control of porcelain berry, followed up with a dense planting of fast growing trees that may eventually shade out porcelain berry. He recommended that hand-pulling or herbicide spot-spraying be used to control subsequent sprouting.