Trending
You are at:Home»Fruits»Prickly Pear facts and health benefits 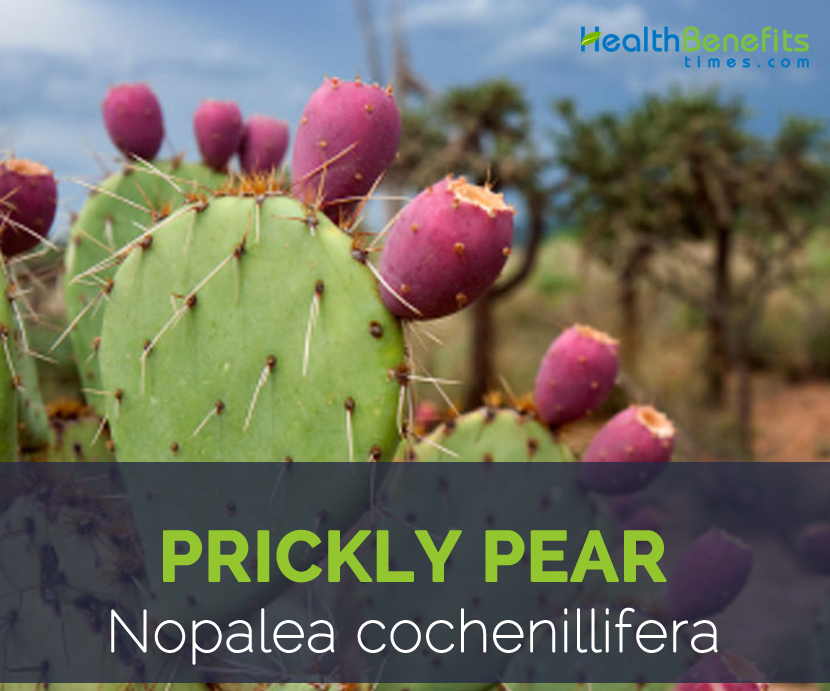 It is a xerophyte producing about 200-300 species, mainly growing in arid (less than 250 mm annual precipitation) and semi-arid (250-450 mm) zones, and is produced and consumed in several countries. It is native to North America, where archeological and phylogenetic evidence conﬁrms that central Mexico is the center of domestication of these species, and it is densely produced in the desert zones of the southern United States, north central Mexico, and Peru. Because of its high adaptability, remarkable genetic variability, and multiple uses, it has been dispersed from its native habitats in North America to other regions in the world including Africa and Europe.The plants thrive well in a subtropical, semi-arid climate. It is adapted to grow and produce under low water regimes and poor soils. Cactus are well adapted to extreme climate and edaphic conditions, especially high temperature and scarce water, in arid and semi-arid regions, and therefore several species are dominant in these regions; some are used for food from the fruit or other parts such as cladodes or stems.

Cactus plants serve as sources for fruit and vegetables, for medicinal and cosmetic purposes, as forage, for building materials, and as a source for natural colors, among other uses. However, many of these uses are still restricted to a very few countries, and in light of global desertiﬁcation and declining water sources, Opuntia spp. is gaining importance as an effective source of food. Internationally, about 100,000 ha are devoted to Opuntia fruit commercial production; however, more than 3 million ha of Opuntia are grown in native habitats. In Mexico over 77,500 ha of cactus pear cactus are commercially cultivated. Opuntia ﬁcus-indica is cultivated in more than 20 countries. Cactaceous plants are of great importance in Mexico for the production of food stuffs as well as for popular medicinal uses and cosmetics.

Prickly pear is a shrubs or small trees growing up to 2–4 m tall. It is found growing in sunny, desert-like conditions and prefers course, well-drained soil in dry, rocky flats or slopes. Trunk is terete and woody. Stem segments are green, elliptic to narrowly obovate, 8–40 (−50) × 5–7.5 (−15) cm, thick, margin entire, base and apex rounded. Areoles are 2 mm in diameter and are 2–3 cm apart. Spines usually absent when present: 1–3 per areole, spreading, greyish tan, acicular, 3–9 mm; glochids inconspicuous and early deciduous. Leaves are conic, 3–4 mm, early deciduous. Flowers are 1.2–1.5 cm in diameter, erect and are red, yellow, or purple colored.

Almost all prickly pear cactus have flat, fleshy pads that look like a large leaves. These pads are actually modified branches and stems that have several functions like photosynthesis, flower production and water storage. Pads are normally flat, fleshy, green-colored and are oval to round in shape. Size of the pads range from 4 in (10 cm) to 18 in (46 cm) in length. Bigger pads can grow as wide as 9 in (23 cm) or more.

Similarly prickly pear plant bears cylindrical, pear-shaped, deep red to purple fruit, about 2.5 in (7 cm) long. Fruit grows at the very edge of the spiny leaves of these imposing cacti. Color may vary from yellow and light green to orange, pink, and red, depending on the variety and ripeness. Flesh is normally white, green, yellow, red, or purple colored and have raspberry like taste. Within the fruit, Gray or tan colored seeds is present that are thickened discoid, 3 mm in diameter, slightly pubescent. Fruits are ready to harvest from September to November. Both pads and fruits of the plant are consumed in a variety of ways since ancient times.

Prickle pear cactus is considered to have originated from Mexico. Wild distribution is found in tropical Central America, Mexico and Jamaica. This cactus is often grown in tropical and subtropical America, also in the Mediterranean, Canary Island, tropical Africa, India and Southeast Asia. Nowadays due to its considerable nutritional value and delightful taste it is grown throughout the world.

The health-promoting properties of cactus fruit and other parts have been the object of great interest, with special attention to antioxidant phytochemicals. The nutritional and health beneﬁts are associated with the antioxidant properties of compounds such as phenolics, ascorbic acid, and pigments. Opuntia ﬁcus-indica is used as a folk medicine in Mexico for the treatment of burns, wounds, edema, and indigestion. Several studies have reported that different parts of the Opuntia species have various medical effects, such as diuretic, anti-inﬂammatory, analgesic, and antiulcerous among others. These properties are generally attributed to the ability of antioxidants to neutralize reactive oxygen species (ROS) such as singlet oxygen and hydrogen peroxide (H2O2) or to suppress the xanthine/xanthine oxidase system, all of which may induce oxidative injury, i.e. lipid peroxidation.

The prickly pears are used for food, as well as alternative medicine treatments, as it has a wealth of nutrients and potential health benefits. It can be consumed right after eliminating their robust, razor-sharp thorns. Raw cactus pears go effectively in fruit salads and also shakes and you may cook these types of fruits into jams or even utilize them in tasty dishes, just like chili.  Let’s take a closer look at the unique health components found inside prickly pears.

It is said that single serving of prickly pears contains more than 1/3 of your entire daily requirement of vitamin C. Also known as ascorbic acid, vitamin C plays an important role in the immune system, stimulating the production of white blood cells and acting as an antioxidant all through the body. Additionally vitamin C is an important component of various enzymatic and metabolic processes, including the creation of bone and muscle tissue.(1)

Nopales are forms of cacti they are fibrous and contain a great deal of dietary fiber. As we all know dietary fiber is essential in the digestive process, because it adds bulk to bowel movements that make easier to pass through the smooth muscles of the digestive tract. It also stimulates peristaltic motion to move the bowels along the tract, and decreases symptoms of both diarrhea and constipation. Additionally, excess fiber within the body can actively reduce the amount of cholesterol, thereby protecting your heart health as well.(2)

Calcium is an integral part of the human diet, and prickly pears contain a considerable amount of calcium in every serving. Calcium is an important element in the creation of bone tissue in the body; in fact, 99% of the calcium in your body is found in bones and teeth. By ensuring you have enough calcium in your system, you can prevent numerous dental issues, as well as age-related bone disorders like osteoporosis.(3)

Several components found within prickly pear helps in weight loss.  Fiber helps to make the body feel full and inhibit the release of ghrelin, which is the hunger hormone, so overeating is decreased. Apart from that this plant is low in saturated fat and cholesterol, but is packed with metabolic potential, so the body works at a higher level without gaining weight. The presence of vitamins B6, thiamin, and riboflavin also makes metabolic function work quickly, and they maximize fat burning and the transformation of food to usable energy.(4)

Prickly pear consists of several components that are good for heart health. Levels of fiber in the fruit help to lower the levels of “bad” cholesterol in the body, while sufficient amount of potassium can help to lower blood pressure, by relaxing the blood vessels and decreasing the stress on the cardiovascular system. Lastly betalains found in prickly pear are directly related to strengthening the endothelial walls of blood vessels, thereby decreasing the chances of weakening or damage to the system. Reducing cholesterol, lowering blood pressure, and strengthening blood vessels can prevent atherosclerosis, coronary heart disease, and strokes.(5)

Prickly pear cactus consists of considerable amount of mineral and vitamin content. It consists of thiamin, riboflavin, niacin, and vitamin-B6, all of which are vital components of cellular metabolism and normal, regulated enzyme function all through the body. If your organ systems and hormonal balance are improved, then body will run more efficiently, it will help to increase weight loss, promote healthy muscle gain, boost repair and maintenance of organs, and generally tone the entire body.(6)

Prickly pears consists of high levels of flavonoids, polyphenols, and betalains, all of which act as antioxidant compounds and help to neutralize free radicals before they cause healthy cells to mutate into cancerous cells. Research has shown lowered chances of cancer in people who frequently add these types of antioxidants into their diet. Prickle pear is assumed to be one of the most beneficial foods for overcoming cancer since it consists of ample amount of antioxidants.(7)

Prickly pear contains magnesium, which is a beneficial mineral for encouraging feelings of sleep for people suffering from insomnia, long-lasting anxiety or restlessness. It encourages the release of serotonin in the body, which results in increased melatonin levels. Additionally it has a somewhat sedative effect, which decreases nerve function and calms the body, helping you to fall asleep.

Prickly pear is traditionally used to cure gastric ulcers. Apparently, the mucilage and fibrous material present in prickly pear helps to inhibit the development of gastric ulcers and those that develop due to excessive consumption of alcohol, so for people, who regularly suffer from this painful condition, add some of these powerful plants to your diet and improve the quality of your life!(8)

The phytochemical and antioxidant present in prickly pear make them a good defensive mechanism against premature aging symptoms, like wrinkles and age spots. The free radicals left after cellular metabolism can completely impact the skin and by consuming prickly pear, you can keep your skin looking healthy, young, and refreshed.

Other Traditional uses and benefits of Prickly Pear

Side Effects and Warnings