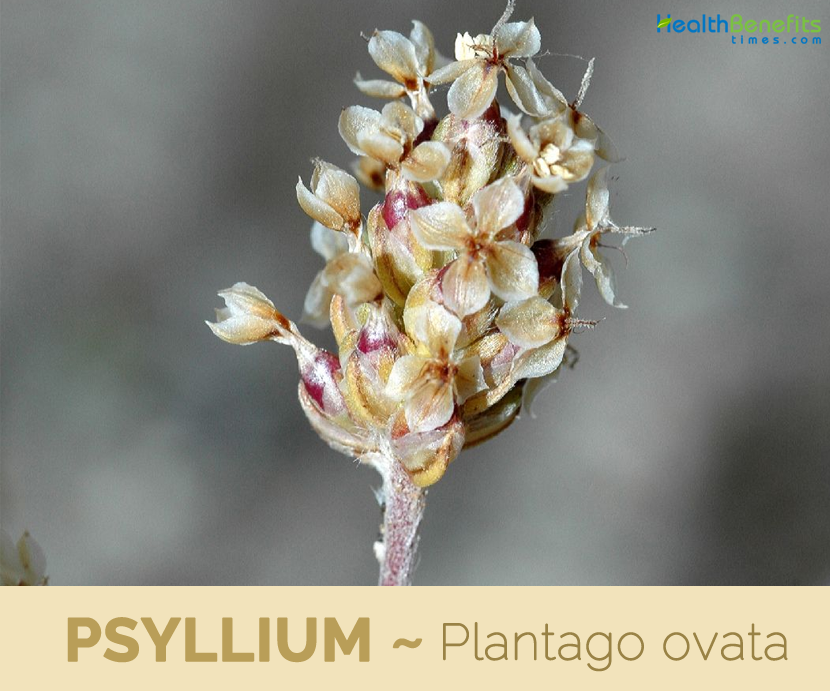 Psyllium scientifically known as Plantago ovata comes from a shrub-like herb which grows worldwide but is most common in India. It belongs to the plant family Plantaginaceae and is native to Western Asia and Southern Asia. Apart from Psyllium it is also known as Blond Plantago, Che Qian Zi, Dietary Fiber, Englishman’s Foot, Indian Plantago, Ispágula, Isabgola, Isabgul, Ispagol, Pale Psyllium, Plantaginis Ovatae Semen, Plantaginis Ovatae Testa, Plantago decumbens, Plantago ispaghula, Ispaghula, Psilio, Psillium Blond, Psyllium, Psyllium Husk, Sand Plantain, Spogel. Each plant can produce up to 15,000 tiny, gel-coated seeds, from which psyllium husk is derived. The shell of psyllium seeds (known as the husk) is ground to take a clear and glue-like substance that is called mucilage. This mucilage contains high levels of soluble fiber and many other beneficial components that are used to cure a lot of diseases. The word psyllium is originated from a Greek word for a flea, referring to the size, shape, and whitish color of the seed, which is the commercially important part of this plant.

Psyllium is a small annual herbaceous plant that grows about 30–46 cm (12–18 in) tall.  The plant prefers cool, dry weather for best production and grows best on light, well drained, sandy loams. The plant has well-developed tap root with few fibrous secondary roots. Leaves are opposite, linear or linear lanceolate 1 cm × 19 cm (0.39 in × 7.48 in). The plant consists of numerous, small, and white which later converted into small seedpods. Seeds which are enclosed in these tiny seedpods are small (1.5–2 cm) and brown or reddish-brown colored. Psyllium has been an essential part of Western, Chinese, and Ayurvedic medicine for ages, as it is a naturally rich source of fiber. Psyllium is considered to be hygroscopic, a quality to expand and become mucilaginous. Isabgol, the common name in India for P. ovata, comes from the Persian words “isap” and “ghol” that mean horse ear, which is descriptive of the shape of the seed. High levels of soluble fiber and many other beneficial components present in Psyllium are used to cure a lot of diseases.

Isabgol (Psylliums), the common name in India for P. ovata, comes from the Persian words “isap” and “ghol” that mean horse ear, which is descriptive of the shape of the seed. It is indigenous to Mediterranean region and West Asia spreading up to Sutlej and Sindh in West Pakistan, also distributed from Canary Islands across Southern Spain, North Africa, Middle East and North-Western Asia. In India the use of isabgol is as old as the Ayurveda System of Medicine. It is commercially cultivated in North Gujarat, Western Rajasthan, Punjab, Hariyana and Uttar Pradesh. Nowadays it is grown throughout the world due to its higher nutritional value and wonderful health benefits.

As far as health goes, psyllium husk is a wonderful option for ideal digestive system. For over 70 years, psyllium husk has been the primary source of both soluble and insoluble fiber worldwide and has a long history of use in traditional and herbal medicines. Fiber is key in helping keep you regular and also in aiding your body in getting rid of nasty toxins. Here’s why you should include it in your diet:

Psyllium is important to improve the functionality and efficiency of the digestive system by binding with water in the gut. If you are suffering from diarrhea, psyllium can help to bulk up your stool and normalize your bowel movements. If you struggle with constipation issues, it can also help reduce that discomfort, as it can stimulate peristaltic motion and keep your bowels moving smoothly. It can also help reduce straining and inflammation, which can help eliminate hemorrhoids and gastric ulcers.(1)

Psyllium is one of the few compounds that are consistently shown to reduce blood pressure in those who frequently consume it. Although you can’t call it a vasodilator, psyllium can certainly ease the tension on blood vessels and arteries of the heart. (2)

Research has shown that regular use of soluble fiber help to manage cholesterol levels. Proper cholesterol regulation is essential for everyone, but vital for people over the age of 50. Research shows that at least six weeks of daily psyllium intake is an effective way for people who are obese or overweight to lower their cholesterol with very few side effects.

If you’ve been told that you need to watch your cholesterol, ask your doctor if adding psyllium to a low-fat, low-cholesterol diet will help you.(3)

Dietary fiber which is found abundantly in psyllium helps to create the feeling of fullness.  That sense of satiety is very important for people looking to cut down on their weight. By preventing between-meal snacking, psyllium supplements can keep your energy levels up without adding on the pounds. Oat bran often consists of psyllium, and is a popular choice as a healthy snack.(4)

Psyllium seeds contain a huge amount of fiber, so they may soften the stools well. In addition, it provides lots of water, which aids in making bowel movement less painful.

To cure gallstones firstly, take 1 tbsp. of psyllium powder and then mix it with a glass of tepid water. Mix them thoroughly and have it twice per day. Follow this remedy regularly until the problem is treated completely.

Psyllium helps to get rid of harmful fungi and bacteria in the body that may result in various skin disorders such as acne or pimples. Consume a glass of tepid water mixed with psyllium and honey before going to sleep. This removes toxins from your body, which gives your skin a glow. Honey also moisturizes and softens your skin.

Psyllium can significantly affect the health of the heart by lowering cholesterol. Dietary fiber helps to decreases the amount of cholesterol absorbed from food, preventing it from sticking in the arteries and blood vessels. This helps to reduce the chances of atherosclerosis and the consequent heart issues that can arise. It does not, however, reduce the amounts of good cholesterol (HDL), which keeps your cholesterol levels balanced and healthy. Furthermore, it stimulates the production of bile, which further uses cholesterol. (6)

Research has shown the mucilage of psyllium to reduce inflammation in the gut and colon. This is due to the fibrous activity found in this unique mucilage, as it can ease the stress and strain on the colon.(7)

Add 1 tablespoon of ground psyllium seeds to 1 cup of tepid water and then consume the solution before it becomes too thick. Use this remedy every day until this disease is improved.

For people not familiar to this treatment, start with half a teaspoon of this powder and then increase the dosage gradually. To prevent constipation, remember to drink plenty of water during the day after using this treatment.

Although psyllium mucilage is often called a laxative, it is just a highly efficient type of dietary fiber. However, it does effectively detoxify the body, as cleansing out the gastrointestinal system can also be very cleansing and beneficial for overall gut health. (8)

Psyllium husk is a great remedy for acidity. When psyllium husk is consumed, it coats your stomach lining with a great protective layer and thus protects it from the irritation caused due to acidity.

Take 2 teaspoons psyllium husk along with 1/2 cup of cold milk after your meals to help to get rid of acidity.

Traditional uses and benefits of Psyllium

For a normal adult, the recommended dosage of Psyllium husk is about 1-2 teaspoons three times a day. However, remember to combine it with fruit juice (non-caffeinated) or water and swallow it down before it swells and thickens. It is also important to drink at least 2-2.5 liters of water a day following consumption of Psyllium. This would help to prevent bloating and constipation.

The recommended dosage of Psyllium for children is about ½ – 1 teaspoon a day. Any more quantity can be a reason for side effects. It is also worth mentioning that Psyllium consumption by children is necessarily to be followed by drinking at least 1-2 glasses of water. However, the more the quantity of water, the better it is.

Side effects of Psyllium

Psyllium has so many health benefits. But, sometimes it can cause some side effects. They are minor side effects, but still, we need to be aware of them.

Psyllium is a dietary fiber supplement. In some people whose body is not adjusted to taking fiber diet regularly, bloating of stomach and flatulence can be the side effects.

Psyllium reduces the blood glucose levels. So, if you are suffering from Diabetes, you will need to reduce the dose of your oral hypoglycemic drugs or insulin.

Some people might develop allergies to Isabgol. The symptoms in these people are same as people developing allergies in response to other allergens. Symptoms can range from minor to severe life threatening ones.

Minor symptoms of allergies can be a runny nose, sneezing, watery and red eyes, urticaria or skin rash. Some people might even develop swollen lips and eyes. Very rarely some people develop anaphylaxis which is life threatening.

Symptoms of anaphylaxis include low blood pressure, difficulty breathing, loss of consciousness, etc. If you find that you develop any symptoms of allergies or feel dizzy or short of breath, call an emergency immediately.

It might reduce the absorption of certain drugs from the intestines like warfarin (oral anticoagulant drug), aspirin (an antiplatelet drug) and also some drugs recommended for treating depression. If you are taking any such drugs, you might need to consult your doctor before taking Psyllium to alter their doses.

If you notice any side effects of psyllium, just stop taking it immediately and consult your physician. You have seen all the health benefits of isabgol and also their side effects.