Trending
You are at:Home»Herbs and Spices»Health benefits of Red Ginger 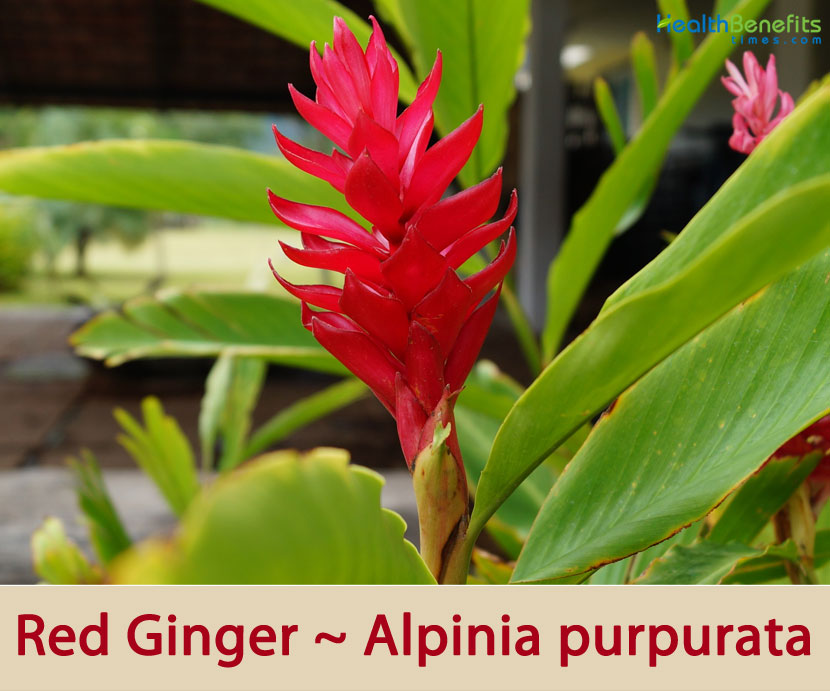 Most people would simply call it red ginger because of its apparently showy red flowers. But it doesn’t have red flowers. Its flowers are white. The red bracts that cover the plant give the impression of a long-lasting, red-flowered inflorescence. Only a patient observer will actually find the true flower buried inside the red bracts. The plant is harvested from the wild for local use as a medicine. It is extensively grown as an ornamental in the tropics; the flower is often used in the cut flower industry. Many people use ginger as a traditional medicine to cure various diseases. The content in ginger is very much, like gingerol, flavonoids, antibacterial agents, anti-inflammatory agents, and others, can have a positive impact on health.

The size of red ginger is also smaller than the usual ginger. Not only is that, the content and taste different. This type of ginger has a more bitter and spicy flavored than ginger usually. Leafy, cane-like stems arise from rhizomes to form a plant 3–15 feet tall and 2–4 feet wide. A stem’s single inflorescence can be up to about 12 inches long. The rhizomes spread laterally in thick clusters, producing aerial shoots at the periphery of the clusters as older shoots dry up after their inflorescences mature and produce offshoots. The rhizomes and stalks are aromatic.

A shoot bears an inflorescence about 41⁄2–5 months after it emerges. The inflorescence is a compact spike 6–12 inches long with a cluster of bracts overlapping to form a cone or funnel shape. Inflorescences are normally erect but droop if large. Although the ovate or broadly obovate 1-inch long bracts are what most people think is the flower, the bracts subtend small, tubular, white 1⁄4 inch flowers having a narrow lip. The flowers open a few at a time.

The plant produces seed capsules only rarely. The seed capsule is subglobose shaped and measures 10 – 15 cm long and 2 – 3 cm in diameter, and split open when the seeds are ripe. The seeds are about 0.2 cm long, black, oily, and may have a red aril. 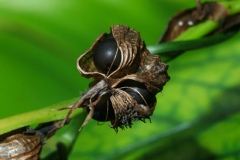 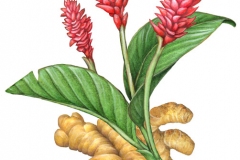 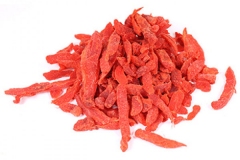 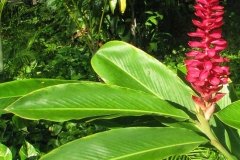 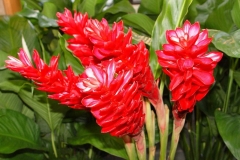 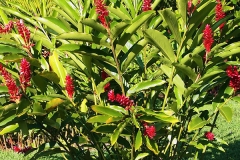 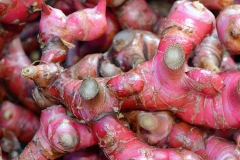 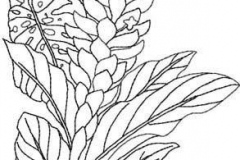 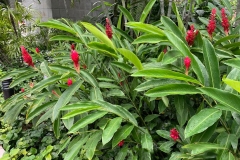 Ginger is considered one of the popularly known herbs to maintain digestive health. However, red ginger is one of the particular types to have other less-known health benefits, including improving male vitality. Listed below are a number of benefits red ginger may have for your overall health.

The feeling of warmth after consuming red ginger surely is beneficial to warm up the body, including preventing cold and flu, as well as giving a relief for your digestion. More than that however, red ginger is also known to maintain healthy digestion and prevent digestive diseases through its antibacterial content. Spread of harmful bacteria like E. coli, Salmonella enteriditis, and Staphylococcus aureus can all be prevented through frequent consumption of red ginger.

Red ginger is also beneficial to reduce pain and inflammation inside the body. Research have shown that red ginger extract can help reduce symptoms of osteoarthritis, like muscle pain. Its effect is allegedly more effective than consuming non-steroidal anti-inflammation drug (NSAID) that is usually used to manage inflammations. Active components that are contained in red ginger, like gingerol, gingerdione, zingeron, and oleoresin may further help inflammations like muscle pain and gout.

Usage of red ginger as an aphrodisiac may not be well known. However, research has shown that frequent consumption of the herb may help improve and treat sexual dysfunction in male. Even though the effect may not as prevalent as other aphrodisiac herb, red ginger is able to improve blood flow in the body that can contribute to improve erections in male. Other than that, antioxidant and androgenic activity found in red ginger can also improve testosterone production, affecting male fertility in a more positive way.

In a study conducted on rats showed that the administration of ginger extract combined with zinc minerals in male albino rats can increase testosterone, sperm count, and sperm quality in rats. Thus, this can improve testicular function in mice. Even so, further research is still needed to strengthen this finding.

Gout is a condition where uric acid buildup happens in your joints, causing pain and swelling around the area. This condition is more prevalent in older adults, even though younger adults may also be at risk when not prevented from early on.

Related to the previous pointer, red ginger may help reduce inflammation in the body, including gout, by clearing uric acid buildup on the joints by promoting a healthier blood flow. Thus, by consuming red ginger frequently, gout can be prevented and treated naturally.

When consumed frequently, the anti-inflammatory and antioxidant content in red ginger can help reduce bad bacteria inside our body system. This action may help improve overall health and more importantly, help take care of our immune system. Moreover, consuming foods with high antioxidant content can also reduce the potential growth of cancer cells.

Red ginger is one of the most beneficial herbs that can reduce human infections. This is because red ginger consists of some very important compounds such as zingeron, shogaol, and gingerol. These three substances can fight infections.

8. Protect Human from getting Alzheimer’s disease

There are several researches about red ginger can reduce the chance of getting Alzheimer’s disease. This is because it has antioxidants and bioactive compounds inside the ginger. Also, some other studies proved that consuming red ginger daily will enhance brain function particularly to reduce memory loss.

Gingerol found abundantly in red ginger will prevent humans from getting cancer if they consume it on daily basis, it proved that the ginger will reduce inflammatory signaling molecules in the colon itself.

Red ginger helps to warms up our bodies. Red ginger gives a spicy flavor from the gingerol in it. It gives a benefit to make our body warm. This is why it is nice to consume red ginger with some tea or hot milk when it comes to rainy seasons. It will also protect our immune to not getting sick easily.

The content of essential oil in red ginger is useful to overcome cough, both for children and adults.

Red ginger is to help eliminate extra gas in the intestinal tract which helps eliminates nausea during pregnancy or chemotherapy and in turn, increases appetite.

Red ginger can be used to lose a person’s weight because of the warmth generated by ginger. Not only that, ginger also consists of few calories so it can not cause weight gain.

Red ginger can also make the heart become healthy because it can lower cholesterol levels and also triglycerides in the body. Cholesterol and high triglycerides can harm heart health.

Morning sickness is often experienced by pregnant women who are still in the first trimester. This is very reasonable because of hormonal changes in the body. Although it is a common problem, it can make pregnant women feel uncomfortable. To fix this, it is recommended to consume a drink made from ginger.

Red Ginger is used to heal the itch on the skin. The trick is to attach the ginger to the itchy skin on a regular basis until the itch is gone.

Red Ginger produces a warm effect so it can relieve the throat. It is suitable for those who are suffering from a sore throat or a cough that makes the throat become itchy.