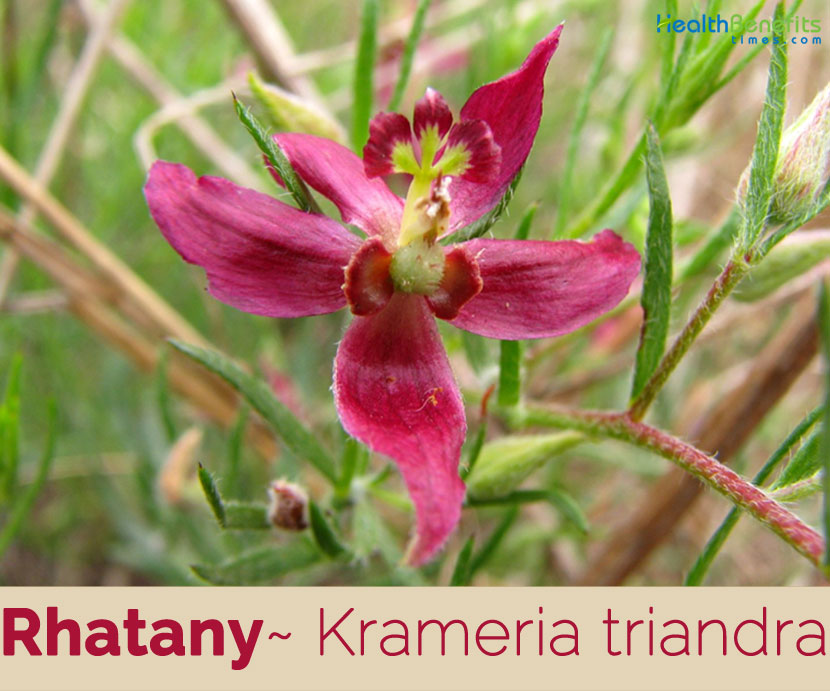 Krameria triandra, popularly known as rhatany is a genus of shrub belonging to Krameriaceae (Krameria family).  The plant is native to found in the semi-desert regions of the South Americas, including Peru, Ecuador, Texas, Chile, Mexico, Bolivia, the West Indies, and northern Brazil. Since Ratanhia belongs to the family Krameriaceae it has several species within its genus, three of which are used in homeopathic remedies. Rhataniatannic acid, a natural astringent, can be extracted from the dried roots of Krameria argentea and Krameria lappacea, both referred to as para rhatany, and Krameria triandra, also called Peruvian ratanhia. Peruvian rhatany, rhatany-root, ratanhia, payta, krameria, mapato, Krameria root, Red Rhatany, Ratanya are some of the popular common names of the plant.

The name rhatany comes from the Peruvian Quechua language and means something like “plant that crawls over the ground” – an apt description of its growth pattern. The generic name Krameria is from the same source as the family name Krameriaceae. It was given to the plant by the Swedish botanist Pehr Löfling (1729-1756), a student of Carl von Linné (1707-1778), who named it in honor of Johann Georg Heinrich Kramer, a military physician in the Hungarian camp of Prince Eugene of Savoy (1663-1736). The scientific epithet ‘triandra’ is composed of the Latin tri = three and Greek Andros = man, and refers to the three male reproductive organs, the stamens, in the middle of the rhatany flower.

In its medicinal uses, Ratanhia can be drunk, gargled, or applied topically as a tincture or syrup to shrink tissues throughout the body. People may drink the tincture in order to constrict tissues to restrict the flow of blood or secretions of mucous. This can be useful for patients with diarrhea or peptic ulcers, though these patients may need additional medical care in some cases. It can also be gargled to help relieve sore throats by reducing mucous secretions. In its topical application, it is often used to stem bleeding in small wounds, such as a pulled tooth or a tear in the anus.

Rhatany is an undemanding dense perennial, evergreen shrub that normally grows about 3 ft. (90 cm) tall. The plant is found growing in rocky and dry areas over mountain slopes, inter-Andean valleys and coastal hills. Root is up to 50 cm long, cylindrical, flexible, reddish brown with dark scaly bark, astringent bark, wood almost tasteless. Bark of the root is thin, readily separable, rough and scaly; of a dark, reddish-brown color outside, and bright brownish-red within. It breaks with a slightly fibrous fracture, is tough and difficult to powder, and has a strong, purely astringent taste, tingeing the saliva red when chewed.

The central woody portion is very hard and almost tasteless. Neither bark nor wood has any marked odor. As the virtues of Rhatany reside in the bark, the smaller pieces are preferable. The roots are sold mostly in cylindrical pieces of different length and thickness. The roots or the root bark are used to make extracts and alcohol-based tinctures. Low-lying branches are covered with silky down when they are young and then become woody and knotty as they age. The plant has yellowish-white, downy, pointed, oblong-ovate leaves about one centimeter in length.

Flowers, which grow from the leaf axils, have four petals which are red on the inside and have grey hairs on the outside. These petals frame three striking-looking stamens. The unusual thing about the flowers is that they do not produce nectar to attract insects. Instead they produce odorless oil in special glands called elaiophores. Fertile flowers are followed by one-celled globular drupe, covered with stiff, reddish hairs. 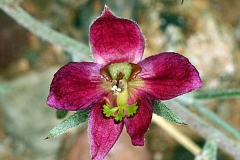 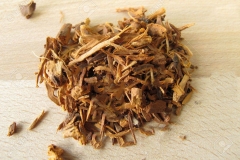 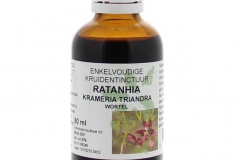 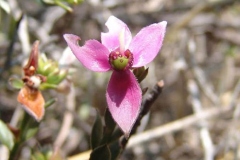 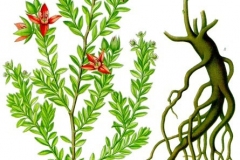 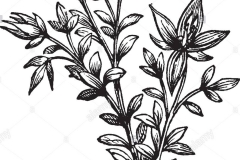 Traditional uses and benefits of Rhatany