Trending
You are at:Home»Herbs and Spices»Health benefits of Rubber Plant 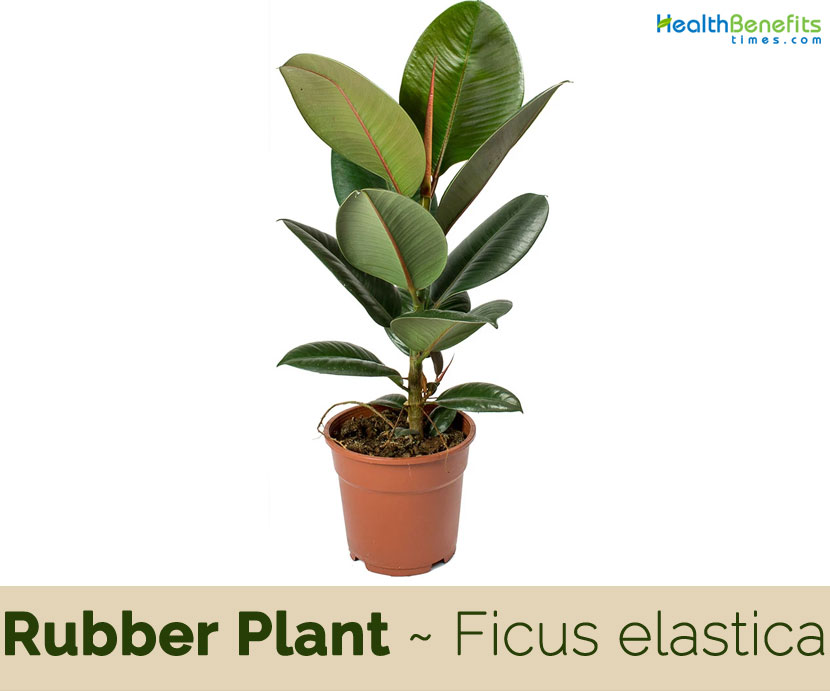 Genus name comes from the Latin name for Ficus carica the edible fig. Specific epithet refers to the milky sap that can be used to produce rubber. The common name of Ficus elastica, rubber fig tree, refers to the milky white sap that is tapped from the tree’s bark. It is widely grown in the tropics as an ornamental tree. Mature trees develop banyan-like aerial roots that form trunks. In colder climates, this is an extremely popular houseplant that is noted for its thick, leathery, glossy, dark green leaves and pink to purplish stipules. Milky sap from these trees was used to make an inferior rubber in the early 1900s.

Rubber plant is a large, evergreen tree that grows about 30–40 meters (98–131 ft.) (rarely up to 60 meters or 200 feet) tall, with a stout trunk up to 2 meters (6.6 ft.) in diameter. When the tree is planted in its original location, it can grow for more than 100 ft. Because of its frost vulnerability, this rubber tree plant is usually grown as an indoor plant. The plant is found growing in hill forest, particularly on cliffs and limestone hills, vegetation zones of tropical rain forest, woodland, shrub land, light tropical forest and as a cultivated plant indoors or in greenhouses elsewhere.

Rubber Plant is another typical epiphyte plant. It grows on the branches of various tropical tree species and develops aerial blastogenic roots that penetrate the soil. The aerial part of these roots becomes trunkish ‘strangling’ the host tree. In cultivation, it often develops an extensive surface root system.

The trunk is cylindrical, unbranched up a long way and then with much-branched leafy canopy, but frequently swollen towards the base. The bark is pale to dark brown with a smooth surface and the inner bark pale brown with abundant white or cream colored latex. The trunk develops aerial and buttressing roots to anchor it in the soil and help support heavy branches. 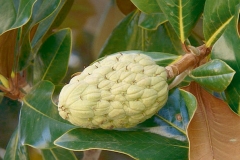 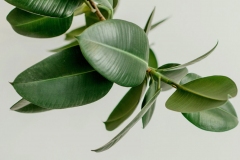 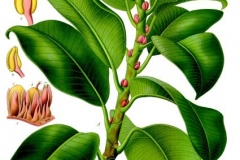 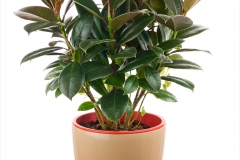 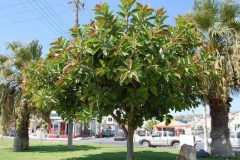 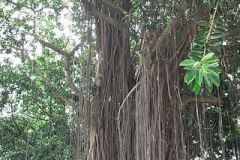 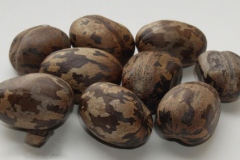 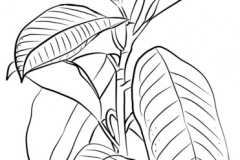 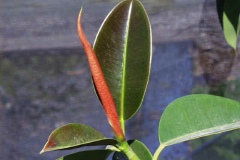 Leaves are broad shiny oval 10–35 centimeters (3.9–13.8 in) long and 5–15 centimeters (2.0–5.9 in) broad. Leaf size is largest on young plants (occasionally to 45 centimeters or 18 inches long), much smaller on old trees (typically 10 centimeters or 3.9 inches long). The leaves develop inside a sheath at the apical meristem, which grows larger as the new leaf develops. When it is mature, it unfurls and the sheath drops off the plant. Inside the new leaf, another immature leaf is waiting to develop. They are relatively thick, acuminate at apex and have a round base. Their petioles are leathery, yellowish brown to black and have a length of 2.5 to 5 cm (1-2 in).

The flowers are produced in the interior of an axillary inflorescence and they have a creamy white color. The males consist of 4 sepals of ovate shape and bear a solitary stamen with ovoid anther. The females consist of 4 ovate-shaped sepals and have a short style with papillate stigma.

Fertile flower are followed by 3-lobed, 3-seeded ellipsoidal capsule. Fruits burst open when ripe and the seeds are scattered up to 15 m from tree. Seeds are variable in size, 2.5-3 cm long, mottled brown, lustrous.

The natural range of rubber ranges from Nepal in the north to Indonesia, Bhutan, northeastern India, Burma and China (Yunnan) and Malaysia. It has been widely introduced in most tropical regions of the world, including Hawaii and the West Indies. Finally, in Europe, it can be found in the sheltered gardens of the Côte d’Azur and on the Spanish and Italian coast.

1. Decreased Chances of Getting Allergies

One of the greatest health benefits of the Rubber Plant regarding air purification is its ability to minimize the chances of an individual getting respiration allergies such as asthma. Thanks to the fact that this plant also helps increase humidity within a room, it prevents pollutants and other unwanted particles to eventually turn into dust.

Leaves of this plant have the power to cure skin rash. This can be done by frequently rubbing the affected area with mashed fresh leaves. Plant’s roots can also help cure rheumatic diseases. Combine 30-50 grams of its roots with 2 glasses of water and boil this until it remains just 1 glass of it. Let it cool down and drink the water.

Leaves of the Ficus Elastica plant are also known to contain analgesic substances that can help cure inflammation. Simply mash the fresh leaves and rub the affected area with them. Besides using it on the skin, the plant can also be used to treat teeth inflammation. Instead of rubbing the mashed leaves, put them in a cup of water and gargle the mixture.

Although it hasn’t been scientifically proven, many people use the leaves of this plant to keep their stomach healthy. Being a natural ingredient that does not contain any artificial chemicals, there is really no harm in using the Ficus Elastic. Nevertheless, it is never a bad idea to consult with your healthcare professional first.

F. elastica trees may grow very large and mechanical removal may only be possible with smaller trees.

Fig trees are mainly sensitive to triclopyr herbicides as a basal or cut-stump treatment. Trees found growing on concrete or rock structures should be treated with herbicide while young to avoid costly structural damage. Use extreme caution while applying herbicide to figs growing as epiphytes to ensure that the poison does not contact the host tree. When exotic figs germinate high in the branches of large trees in natural forest communities, it may be extremely difficult to get close enough to the fig to treat it.”

Pollinator wasps should be prevented from entering Hawai’i in order to prevent spread of F. elastica. Other native or non-harmful non-native trees could be planted.