Trending
You are at:Home»Herbs and Spices»Health benefits of Russian Olive 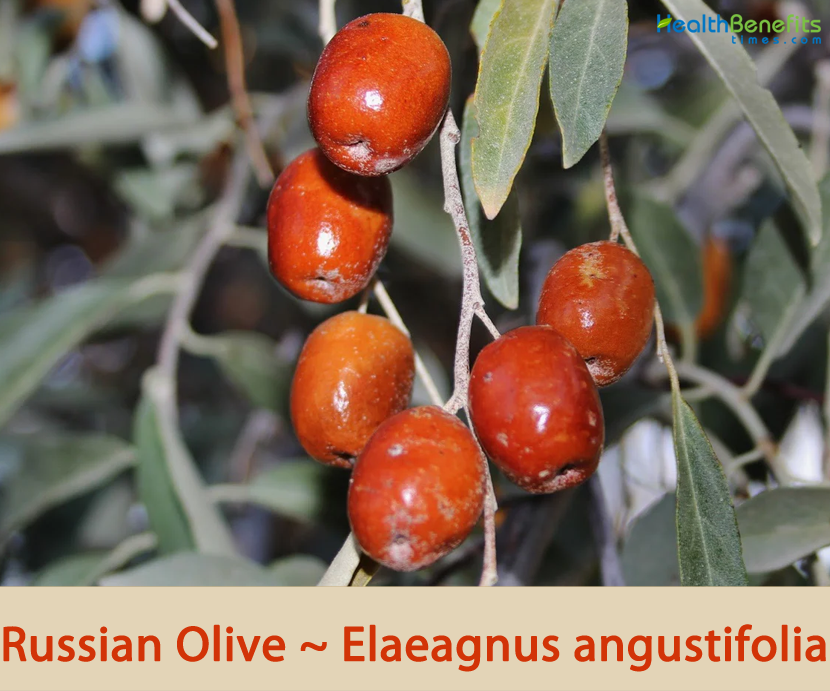 Elaeagnus angustifolia, commonly called Russian olive, silver berry, oleaster, or wild olive, is a thorny shrub or small tree belonging to Elaeagnaceae (Oleaster family). The plant is native to western and central Asia, Iran, from southern Russia and Kazakhstan to Turkey, parts of Pakistan and parts of India. It was introduced to the United States in the early 1900s and became widely distributed due to its extensive use as an ornamental species in drier regions of the Great Plains and Rocky Mountains. Some of popular common names of the plant are Russian-olive, elaeagnus, oleaster, trebizond-date, silver berry, wild olive, autumn olive; Bohemian olive; narrow-leaved oleaster; Russian silverberry; Russian-olive; silver berry; trebizond date, Russian Elaeagnus, Eastern Oleaster, Sweet Olive and wild olive.

The genus name Elaeagnus comes from the Greek words elaia which means “olive tree” and agnos meaning “chaste” or “pure”. Specific epithet means having narrow leaves. Russian olive fruits have high nutritional values and consist of proteins, sugar, vitamins and minerals. The flowers are small, fragrant, and a yellowish-white color and have been used as a source of nectars for honey bees, as well as a flavoring agent in liqueur production.  The flowers have also been used to treat tetanus in traditional medicine. Fruit is edible, and is sometimes used for making preserves.

Different parts of the Russian olive plant have been used in a variety of medicinal formats, in perfume industries, as well as in wood-work and musical instruments production. Fruit is also attractive to wildlife. Although relatively tame in the St. Louis climate, Russian olive has aggressively naturalized in many parts of the West, particularly in water sheds and marshlands of the Great Plains where it has self-seeded and spread along rivers and wetland areas, crowding out native plants such as cottonwoods and willows, to the point where it is now being considered a noxious weed.

Russian olive is a long lived tree (80–100 years) that normally grows about 5–7 meters (16–23 feet) tall and 100 cm in diameter and starts to fruit after 5–6 years. It has spreading branches that form a dense and rounded crown. The plant is found growing in mountainous areas, plains, sands, desert, floodplains, river banks, stream courses, marshes, grasslands, roads, railways, fence lines, irrigation ditches, springs, riparian corridors, sub-irrigated pastures, saline affected areas and some wetland site. The plant can thrives under a wide range of soil textures from sand to heavy clay, and can withstand flooding and silting. It grows best in deep sandy or loamy soils with only slight salt and alkali content. It grows best in inland areas with warm summers and cold winters. It can establish in a broad range of conditions–from full sun to shade, where the water table is shallow or deep, and in flooded or rain-wetted sites. This tree can tolerate a wide range of harsh environmental conditions such as flood, severe drought, stony, sandy and high salinity or alkalinity of the soils.

Elaeagnus angustifolia has a deep taproot and extensive root system with many well developed lateral roots. It is an actinhorhizal species, able to participate in a nitrogen-fixing symbiosis with action-mycetes of the genus Frankia. It can propagate vegetatively by sprouting from buds formed where the stem meets the root (called the root crown) or directly from the roots.

Branches are sometimes thorny, the thorns up to 2 inches long, shiny dark reddish-brown. Older bark is gray, rough and somewhat flaky, peeling off in narrow strips. A mature tree is up to 6 inches in diameter at breast height, the crown is heavily branched, rounded, and about as broad as tall. Plants can spread from root suckers.

Leaves are alternately arranged, toothless, and narrowly lanceolate to elliptic in shape and 4-8 cm (1.6-3.1 inches) long and 1.0-2.5 cm (0.39- 0.98 inches) broad, blunt or pointed at the tip, mostly wedge-shaped at the base. Leaves have smooth margins. New leaves are densely covered in silvery-white scales on both surfaces; the upper leaf surface is gray-green and moderately covered with silvery star-shaped hairs and scales, giving the leaf a faded appearance.  The lower surface of the leaf has a light grey color and is densely coated with silvery peltate scales. As is typical of nitrogen-fixing plants, Elaeagnus angustifolia leave have high nitrogen content.

1 to 3 short-stalked flowers occur in the leaf axils of the current year’s new branches. Flowers are funnel-shaped, about ½ inch long and about as wide, with 4 spreading, triangular, petal-like sepals that are creamy-white to yellow on the inner surface and silvery on the outer, and fused at the base forming a squarish tube about as long as the sepal lobes. Inside the tube are 4 yellow stamens and a pale style. The stalk and outer surface of the sepals are densely covered in silvery scales. Flowers are very fragrant. Flowers bloom May to June and are pollinated by insects. The plants begin to flower and fruit from 3 years old.

Fertile flowers are followed by followed by clusters of fruit, a small oval to nearly round cherry-like drupe 1.0-1.7 cm (3⁄8–5⁄8 in) long and 1 cm wide. Fruit is densely covered in silvery scales when young, becoming mostly smooth with maturity. The fruit are white when first formed, yellow or light green when they are young, and brown or dark red when they are matured. The fruits are sweet, though with a dryish, mealy texture. The pit inside is elliptic, nearly as long as the drupe. The fruit needs to be fully ripe (around September to October) if planning to ingest. The fruits can last throughout the winter.

Seeds are contained in yellow-brown berries are rather large and can be up to 0.4 in. (1 cm) long. Seeds are spread mainly by birds and remain viable in the soil for three years. 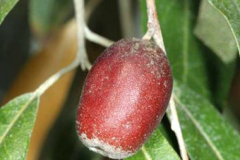 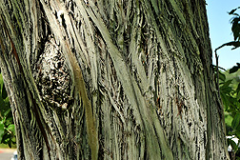 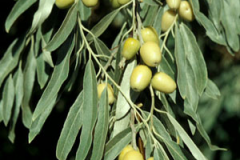 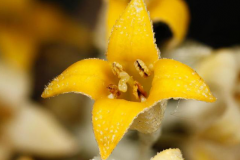 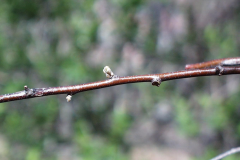 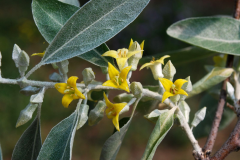 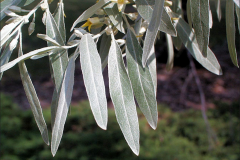 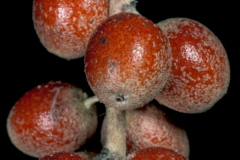 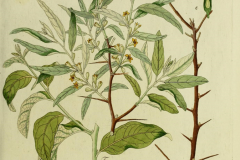 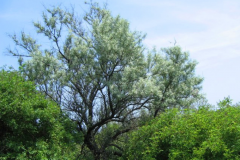 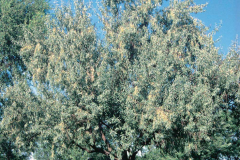 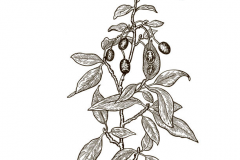 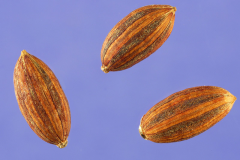 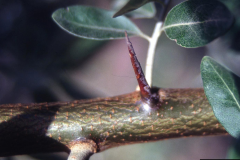 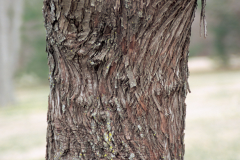 Health Benefits of the Russian Olives

Russian olive tree is rich in flavonoids, alkaloids, water, and fat-soluble vitamins, as well as carbohydrates and biologically active lipids. This is why Russian olive extracts have been frequently used in traditional herbal medicine. Let’s look at some of the health benefits of this hardy, deciduous tree.

Russian olive fruit extracts have also been proven to accelerate wound healing and closure. The Vitamin A in the fruit extracts boost epidermis regeneration and reduces inflammation and pain.

Numerous researches have reported on the muscle relaxant properties of Russian olive leaf and fruit extracts. These studies showed that the muscle relaxing effects of the aqueous and ethanol extracts were similar to diazepam in controlled doses.

Leaves and flowers of the Russian olive tree consist of flavonoid compounds, a powerful antioxidant element that has been shown to reduce oxidative stress as well as the risk of degenerative diseases.

Control is difficult once E. angustifolia trees are mature and populations are well-established, or may even be nearly impossible to eradicate, though Zouhar thoroughly review management and control methods employed in the USA, which are largely adapted and reported here. Mowing seedlings, cutting, burning, spraying, girdling and bulldozing have all been attempted, although cutting, followed by either spraying or burning the stumps is the most effective.

Zouhar recommended that it is unlikely that exotic species will be eradicated from riparian systems in the south-west USA, and that it is also unlikely that simply removing exotics would allow natives to thrive where conditions no longer favor them. Thus, if a return to natural, sustainable conditions may not be possible then it may be necessary to design management techniques such as timed interval flooding and artificial seedbeds, to maintain riparian function. In conclusion for the south-west USA, managing for native species may be more successful than managing against exotic species. Promotion of natural processes such as natural flooding regimes may be important in managing for desirable native species. However, removal of E. angustifolia may only facilitate recovery of native species where natural disturbance processes still function adequately. On dammed, regulated rivers and areas with intensive livestock grazing, removal or suppression of E. angustifolia will only have temporary effects unless native species are established. Elimination of the stresses such as high salinity and reduced stream flows that favor exotic plants over native plants may be necessary if native plant communities are to be sustained.

Hand-pulling and other manual methods have been attempted with limited success in Arizona, USA, and ring-barking will also kill older trees. Also, techniques such as mowing, cutting, girdling, chaining, and bulldozing can suppress E. angustifolia. However, disadvantages can be substantial, including the need for frequent treatment repetition, indiscriminate removal of other species, and severe soil disturbance.

CABI initiated a biological control program against E. angustifolia in 2007, with the primary focus on species that impact the reproductive output without affecting standing trees, due the potential conflict of interest. Of the three species currently under study, the Eriophyid mite, Aceria angustifoliae, is the most promising agent with a high level of specificity and preliminary studies suggest a high impact on fruit and ultimately seed production. However, to date no biological control agents have been released against this species.

Herbicides may be effective in gaining initial control of a new invasion or a severe infestation but are rarely a complete or long-term solution to weed management, and herbicides that have been reported as effective at controlling E. angustifolia to varying degrees include glyphosate, imazapyr, triclopyr, picloram, and 2,4-D.

Foliar spraying of herbicide has proved successful in some cases although the long-term response is unclear and this approach may be neither feasible nor desirable in many riparian settings, though small seedlings are killed with foliar applications of picloram + 2, 4-D. Triclopyr ester is an effecting cut stump treatment if applied within 5 minutes of cutting and on smaller trees, otherwise repeated follow-up passes are required, though stem injections is a useful complement.

Noting its high value in China and elsewhere in Asia, it may be wise to look in more detail as the uses of this species, in order to assess if there may be any possibility of control by utilization.

As control of E. angustifolia is difficult once trees are mature, so early detection and rapid response are important, and awareness and prevention are probably the most effective tools for managing against it. Ecological niche modeling also holds promise for the development of control and eradication strategies and for risk assessment for species invasions, including E. angustifolia. Although, it is clear that a considerable level of research effort has been applied to woody stemmed, exotic/weed species ecology, an approach involving close coupling between classical mathematical species competition models and field management predictive capability may provide a useful first approximation.