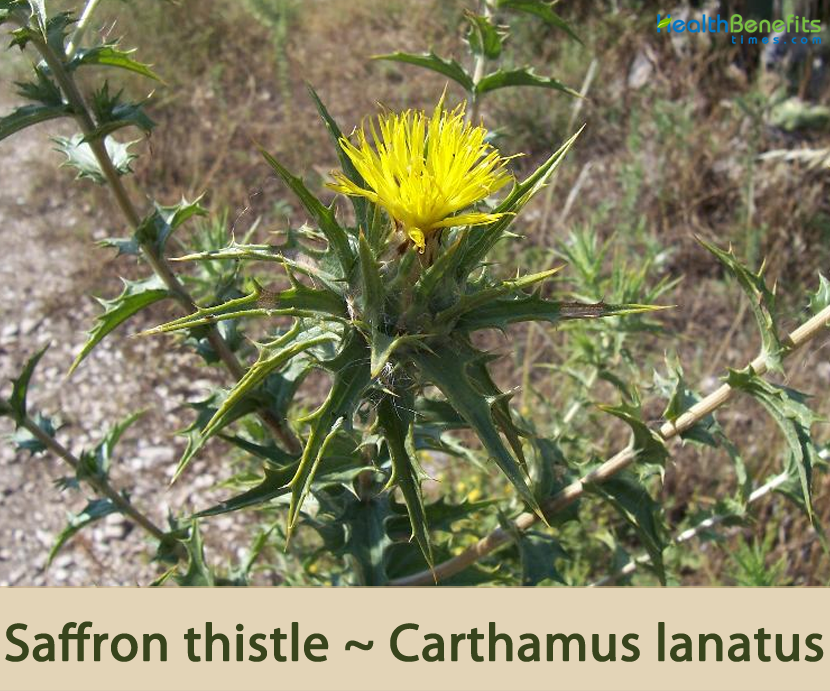 Carthamus lanatus commonly known as Saffron thistle, Woolly distaff thistle or downy safflower is an erect, spiny plant belonging to Asteraceae / Compositae (Aster family) and is closely related to slender and spear thistles. It is closely related to safflower (Carthamus tinctorius). The plant is native to the Western Asia, southern Europe and Mediterranean region (i.e. Egypt, Turkey, Czechoslovakia, Hungary, Switzerland, western Russia, Ukraine, Albania, Bulgaria, Greece, Romania, Yugoslavia, France and Portugal); it has spread to many temperate areas of the world, including the United States of America, Argentina, Chile, New Zealand and Australia. In Australia introduction of the plant was probably intentional, as it can be confused with a closely related safflower, and imported as a source of dye. In India it is found naturalized in Kashmir.

Saffron Thistle is an erect, spiny, glandular, woolly winter annual plant that normally grows up to 3.3 ft. (1 m) tall. The plant is found growing in roadsides, pastures, waste land, arable land, river flats, fowl runs, railway ballast, woodland, dry hills, uncultivated ground, disturbed open sites, fields, annual grasslands and sometimes agricultural land, especially grain fields. Under high fertility conditions other plants tend to displace Saffron Thistle, so it is more abundant on the less fertile soils. It has no particular affinity for soil types, but tends to be less common on the sands and in WA is most abundant on the red clays. It is most common on disturbed loamy and clayey soils in NSW, and generally prefers cultivated or disturbed soils elsewhere. Roots are simple, unbranched taproots with numerous fibrous secondary roots.

Stem is unbranched on the lower third and extensively branched on the upper two thirds. Stems are rigid, ribbed, white-yellowish white, but may be pale green in color, usually with minute hairs, but some plants are wooly. Stems do not have the wings that are prominent on Italian and slender flower thistles.

Leaves arise from the base and also on the stem. The rosette leaves (a cluster of leaves at the base of a plant often lying flat against the ground) are up to 20 cm long and to 5 cm wide. They are deeply divided with broad terminal lobes, each lobe ending in a spine. Stem leaves are 11 cm long and to 5 cm wide, spreading or recurved, lance shaped to ovate, alternate, shorter, reflexed (turned abruptly backwards or downwards) and very rigid. They are prominently veined, lobed and spiny and are stem clasping; usually without hairs or sparsely downy on the upper surface.

Flowering heads usually 25-35 mm long are made up of many yellow or cream florets (an individual flower usually small, forming part of a group of flowers arising from one stem) with faint red or black veins. The flower heads are solitary at the end of branches. The florets are surrounded by stiff, spiny, leaf-like, hairy bracts (a small leaf-like appendage or scale which is immediately below a flower or inflorescence) that are 3-5cm long. The flowers are hermaphrodite (has both male and female organs) and are pollinated by Insects. Flowering normally takes place in between July through August. 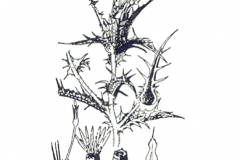 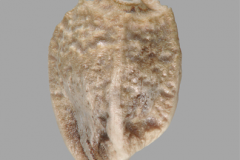 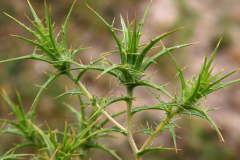 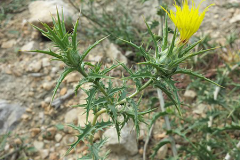 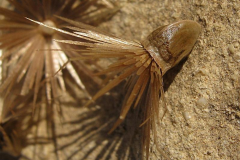 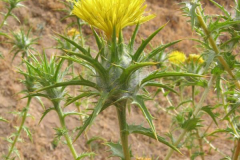 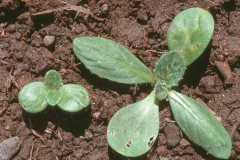 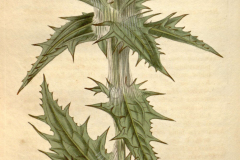 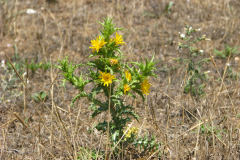 Fertile flowers are followed by Achene (cypsela) that looks like a shuttlecock about 5-8 mm long. They are initially green turning to brown to greyish as they mature. They are 4 ribbed and sometimes wrinkled or pitted near the top. The 4 angled bases are about 3 mm long and surmounted by a fringe of semitransparent scales.

Seeds are grey brown, 4 angled; egg to wedge shaped, smooth 4-6 mm long, about 3 mm wide and hairless. Some have a pappus of several rows of stiff bristles of uneven lengths up to 10 mm long.

Saffron thistle plant can be controlled using a range of herbicides. Several biological control options have been investigated for Australia, including classical biological control, although finding an insect or fungus that will not also attack safflower has proven difficult. A rosette-feeding fly Botanophila turcica shows some promise. The potential for using pathogens already present in Australia has also been investigated.

In pastures, good pasture cover in autumn will reduce germination, suggesting that pastures should be managed to reduce grazing pressure over summer, and increase the cover from summer-growing perennial grasses. Population models suggest that strategic grazing may be one of the most effective long-term control options for infested pastures.

Production and spread of seeds must be halted. Isolated plants should be killed with an herbicide or cut just below the soil and removed from the field. Mowing is effective if done just prior to flower-bud formation. If mowed too early, the plants regrow from the base and produce new flower stems. If left until flowering, there may be enough food material in the cut stems to allow the seeds to mature.

Heavy grazing of a pasture encourages distaff thistle because the leaves of the flat and spiny rosettes are difficult to graze. Most other plants are grazed first, leaving distaff thistle with little competition. Invasion by distaff thistle is most likely in areas where the soil has been disturbed or the pasture weakened by overgrazing. Distaff thistle does not readily attack well-managed perennial pastures but quickly becomes established in any cropping system that leaves small sites between plants unoccupied in fall and early winters.

Several common broadleaf herbicides control distaff thistle when applied to seedlings or rosettes. Control is more difficult as plants mature. Any control programs must include the establishment and care of a vigorous crop to resist further invasion by distaff thistle.

Herbs and Spices S
Share. Twitter Facebook Google+ Pinterest LinkedIn Tumblr Email
Previous ArticleYou Can Keep Your Mental Health In Good Order If You Regularly Take Care Of It
Next Article The Benefits of Formulating Your Own Health Drinks