Trending
You are at:Home»Fruits»Health benefits of Schisandra 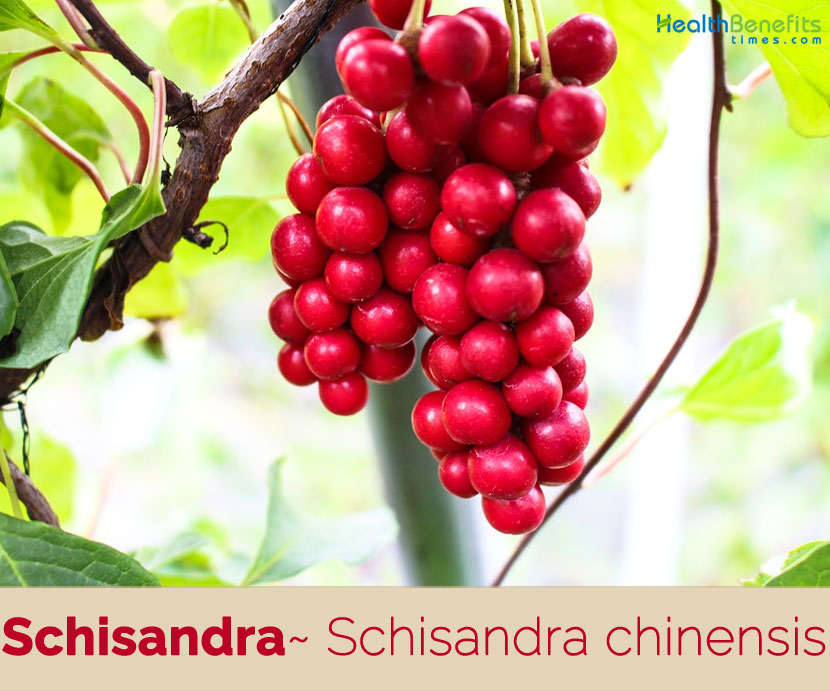 Schisandra ranks along with other Chinese tonic herbs as an excellent tonic and restorative. It helps in stressful times and increases zest for life. The berries tone the kidneys and sexual organs, protect the liver, strengthen nervous function, and cleanse the blood. The name wu Wei zi means “5-flavored herb,” since this herb supposedly tastes of the 5 main elemental energies. It has a sour, salty, and slightly warm.

Schisandra also referred to as Schizandra or Schisandra Chinensis is an aromatic, deciduous, climbing woody vine that normally grows about 20 to 30 ft. tall. The plant is found growing in mixed forests, especially on the margins, also by streams and brooks, usually on sandy soils. The plant prefers a slightly acid soil but tolerates some alkalinity if plenty of organic matter is added to the soil. Branchlets are red, round, not downy, set with wart-like lenticels. Petiole is 0.9-4 cm long and glabrous. Leaf blade is elliptic to obovate, 4.5-10.5 cm long and 2.5-6.5 cm wide, thinly papery to papery, not glaucous, venation glabrous or rarely adaxially sparsely pubescent. Secondary veins are 3-6 on each side of mid vein, base cuneate, attenuate, or rarely broadly cuneate. The leaf margins is grandular serrulate and no hair on the surface.

The flowers are unisex, usually dioecious than monoecious, solitary or in clustering axillae with 6-9 milky white or pink tepals. There are 5 stamens and anthers cluster on the top of cylindrical receptacle. The female flower has 17-40 carpels and the receptacles prolong after flowering.  Flowering normally takes place from April to May.

The species itself is dioecious, thus flowers on a female plant will only produce fruit when fertilized with pollen from a male plant. Fertile flowers are followed by small berries, about 1 cm in diameter, whose exocarp and mesocarp are smooth, shiny, of a strong red color. The berries are clustered in grape-like bunches about 10 cm long

This healthy and exotic berry is categorized as an adaptogen, meaning it helps prevent physical and chemical stress on the body. When consumed, it gathers in the heart, brain, kidneys, lungs, and liver tissues. 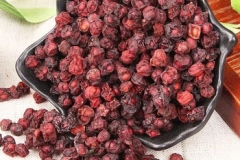 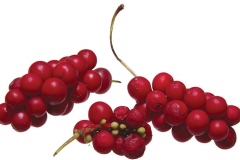 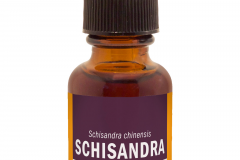 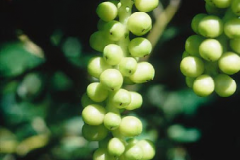 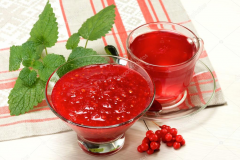 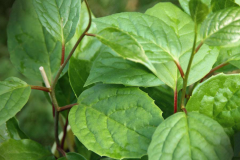 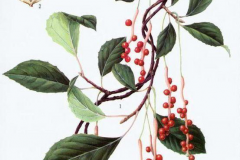 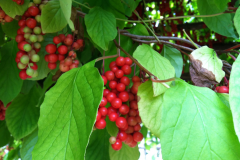 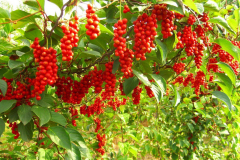 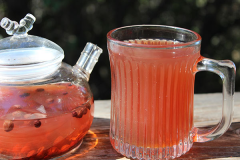 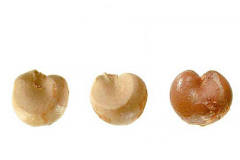 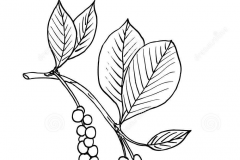 Schisandra can be used for a wide range of health-related issues. There’s certain scientific data from animal and human research that specify Schisandra may have a positive effect on several conditions and diseases. Listed below are some of the popular health benefits of Schisandra

Research has discovered that Schisandrin B had a beneficial, positive effect on Alzheimer’s disease. Researchers determined that this was caused by Schisandrin B’s ability to block formation of excess amyloid beta peptides in the brain. These peptides are one of the components responsible for forming amyloid plaque, a substance found in the brains of people with Alzheimer’s disease.(1)

Another research indicates that Schisandrin B may be effective against both Alzheimer’s and Parkinson’s disease. This is due to its anti-inflammatory, neuro protective effect upon microglial cells in the brain. (2)

Animal research found that Schisandra extract had an antidepressant effect on mice. Additional research, run by the same lead researcher, solidified this finding. However, Schisandra and its potential effect on depression haven’t been extensively studied in humans.(3),(4)

Schisandra has been used traditionally to treat liver diseases such as hepatitis and improve liver function. Schisandra antioxidants are mostly responsible for these effects. They help maintain liver function while preventing damage. (5)

In Japanese herbal medicine, a mixture of herbal extracts TJ-108 is used to treat hepatitis C. Schisandra extract seems to be the key ingredient in this mixture (6).

In a research scientists detected the potential of schisandra extract and schisandrin B to improve non-alcoholic fatty liver disease (NAFLD) and alcohol-induced liver damage. (7), (8), (9)

Supplements that consist of Schisandra extract are traditionally used to treat a cough and asthma.

Research carries out with Schisandra extract on women with menopausal symptoms shows positive response. Researchers determined that Schisandra is effective at alleviating some symptoms of menopause. These symptoms included hot flashes, sweating, and heart palpitations.(11)

Schisandra improved exercise performance and endurance by helping the animals adjust to stress.(13), (14)

Schisandra helps to increase blood flow and nitric oxide availability in two smaller clinical trials, which might safeguard the heart and blood vessels in theory.(19), (20)

However, no clinical studies have investigated the effects of Schisandra on heart health. Sheng-Mai-San, a supplement that contains Schisandra fruit extract, is used to treat heart disease in Chinese traditional medicine.(21)

Schisandra berry was valued by Chinese for its beauty and anti-aging qualities. Packed with antioxidants, including key vitamins C and E, Schisandra’s strong astringent qualities enable the skin to hold in moisture for more fullness. Schisandra may also protect against UVB induced skin damage and is still used as an important botanical in many Eastern skin formulas.

Schisandra is known to boost water Qi in the kidney and to support water of the genital organs- referring to the sexual fluids. For men, the sexual fluids promote the production of semen. For the ladies, Schisandra is said to increase circulation and sensitivity in the female genitals. This feeling will increase orgasms and satisfaction. This makes Schisandra a very powerful aphrodisiac that can compliment intimate relationships.

Traditionally, schisandra have been used for stress management, mostly because this class of herbs shows positive health effects on the adrenal system. The adrenal glands are responsible for the production of stress hormones and stress-response mediators like cortisol. By squelching excessive production and secretion of molecular chaperones, cortisol and nitric oxide, schisandra aids in stabilizing the levels of these stress-associated compounds in the blood. In turn, this keeps the negative effects of stress (i.e., fatigue, mental fogginess, low energy levels etc.) at bay.

Schisandra has the ability to fight fatigue both mental and physical. It has the ability to reduce the harmful effects of the stress response (i.e., weakness and lethargy) in turn helps to endorse mental clarity. This is yet another reason why endurance athletes have historically used schisandra supplementation for performance enhancement.

Schisandra helps to curb feelings of anxiousness and even improve mood. Schisandra’s positive effects on the brain have also concerned this powerful herb in the therapeutic prevention of a variety of psychological and neurological disorders, including depression and anxiety. The calming effects of schisandra can enhance sleep quality. In fact, in some cases it has been used as a sleep aid for those who suffer from sleep disorders.

Schisandra’s in anti-inflammatory effects help the body to hinder inflammatory processes such as those involved in the development of dermatitis and a variety of other inflammatory skin conditions.  Schisandra’s positive role in overall tissue repair also shines when it comes to the outer layers themselves. So, when push comes to shove, wave inflammation goodbye and welcome schisandra for salvaging your skin!

Improving mental clarity and performance is one of the oldest uses of schisandra. It has been used for centuries in Russia to promote stamina and in traditional Chinese medicine to improve concentration, memory, motivation, and mental health. Caffeine can cause restlessness, nervousness, and an irregular heartbeat. Schisandra on the other hand has the opposite effect of caffeine, and it can make you feel calmer while fighting fatigue. Research has suggested that schisandra fruit extract may be useful in the prevention and treatment of Alzheimer’s disease.

Traditional uses and benefits of Schisandra