Trending
You are at:Home»Herbs and Spices»Health benefits of Siam Weed 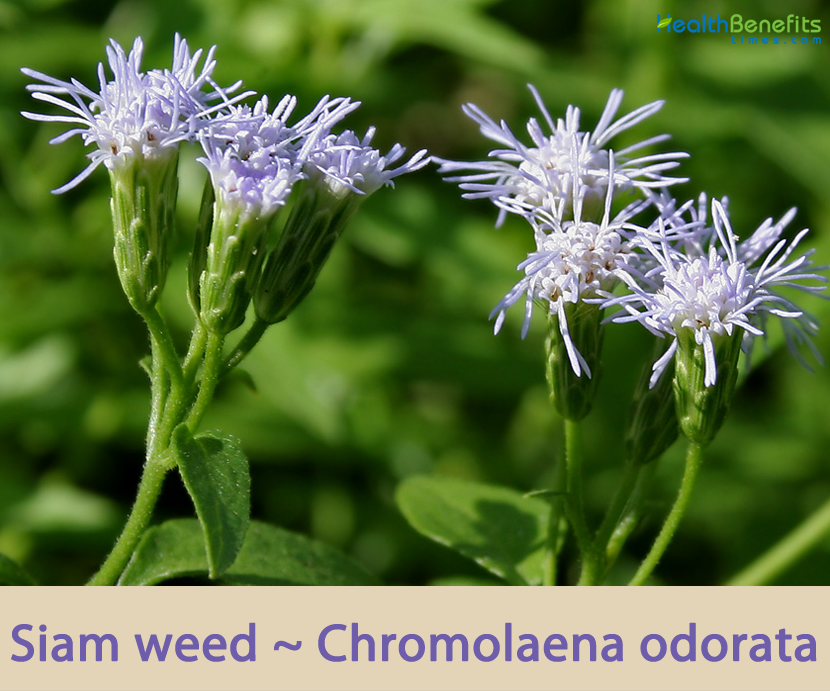 Siam weed is regarded as one of the most harmful weeds present on earth. It is generally regarded as poisonous to animals and thus not recommended as a livestock feed. Many efforts are being made for the control of this weed. But, none of them have provided any significant success. It has been utilized  in  the  traditional  medicinal  systems  for  its  curative  properties  for centuries. Some of the current studies have revealed its medicinal properties which have led to an enhanced image of this plant as a medicinal herb.  It showed anti-inflammatory, anti-pyretic, analgesic, antimicrobial, and cytotoxic and many other relevant medicinal properties in a considerable scale. It is used to treat unspecified medicinal disorders, as animal food, a poison and a medicine, has environmental uses and for food.

Siam weed is an upright or sprawling, rapidly growing, herbaceous semi-woody to woody perennial shrub that normally grows about 1.5 to 3 m tall in the open, however it may reach greater heights about 6-20 m when climbing over trees and other taller vegetation. The plant is found growing in croplands, neglected pastures, forest margins, disturbed rainforests, cultivated lands, forest clearings, wastelands, along forest trails, fence rows, roadsides, waterways, bush land, riparian zones, disturbed sites, agricultural areas, natural forests, planted forests and grasslands. The plant grows in many soil types but prefers well-drained soils. It does not tolerate shade and thrives well in open areas. The plant has shallow, fibrous abundantly branched root that does not penetrate beyond 20-30 cm in most soils. Many paired branches grow off the main stem. The base of the plant becomes hard and woody while the branch tips are soft and green. It has soft stems but the base of the shrub is woody. In shady areas it becomes etiolated and behaves as a creeper, growing on other vegetation.

The slender stems are generally yellowish-green and somewhat hairy (i.e. pubescent), but become woody towards the base of the plant. These stems grow up to 7 m or more in length and several are usually produced from the plants long-lived root-stock (i.e. crown). They are much-branched, with the side (i.e. lateral) branches usually being produced in pairs in the leaf forks (i.e. axils).

The oppositely arranged leaves are 5-12 cm long and 3-7 cm wide and are triangular or egg-shaped in outline (i.e. ovate) and have a pointed tip (i.e. acute apex). They are hairy (i.e. pubescent) on both surfaces and have coarsely toothed (i.e. serrated) margins. These leaves are borne on stalks (i.e. petioles) up to 6 cm long (usually 10-15 mm), and give off a strong pungent, aromatic odor when crushed.

The small flower-heads (capitula) do not have any petals (ray florets) and are borne in dense clusters at the ends of the branches (in terminal panicles). These flower-heads are about 10 mm long and 3 mm wide and are pale pink or pale mauve in color (sometimes appearing whitish when older) and consist of numerous (15-30) tiny flowers (tubular florets). These tiny flowers are 10-12 mm long and are surrounded by several layers of overlapping slender bracts (an involucre) 8-9 mm long. Each flower-head (capitulum) is borne on a stalk (peduncle) 10-30 mm long. Flowering normally takes place in between December and March.

Fertile flowers are followed by narrow and elongated, black or dark brown seeds (achenes) that are 4-5 mm long and topped with a ring (pappus) of white to brownish coloured hairs (5-6 mm long).They are mostly spread by the wind, but can also cling to fur, clothes and machinery, enabling long distance dispersal. Seed production is about 80000 to 90000 per plant. Seeds need light to germinate. The plant can regenerate from the roots. In favorable conditions the plant can grow more than 3 cm per day. 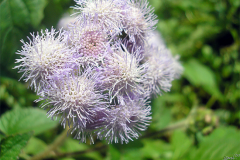 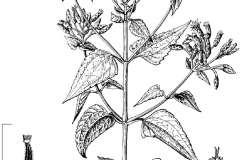 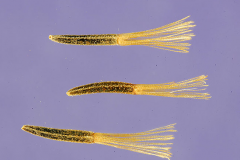 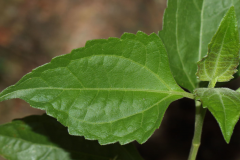 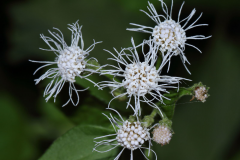 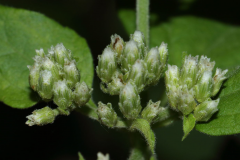 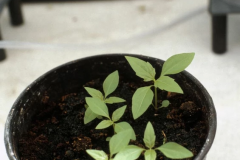 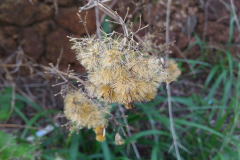 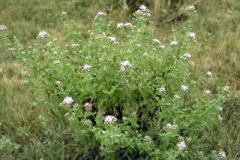 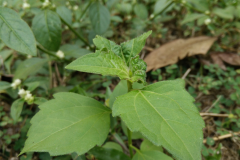 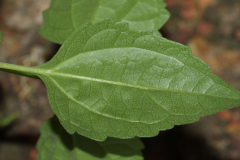 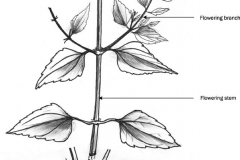 Siam weed consists of carbohydrate, protein, lipid, fiber, calcium, magnesium, iron, as well as flavonoids, alkaloids, tannins, saponins, and more. Today, we are trying to understand more about the plant by looking at some of its health benefits. Listed below are some of the well-known health benefits of Siam weed

Siam weed can be used to relieve body pain. You have the option of drinking its juice to find relief from internal body pain, such as back pain. You can also use it as an analgesic for joint pain by crushing the leaves and rubbing them on the affected area.

Siam weed also help to maintain your heart health by preventing several heart diseases. Including Siam weed to your diet can help to protect your heart and keep it healthy.

Siam weed can be quite beneficial for those with diabetes as it helps to reduce blood sugar levels, allowing them to cope with their condition better. It can also be taken by those looking for a way to prevent diabetes. One study on streptozotocin-induced diabetic rats suggested that extract of Siam weed can help in reducing glucose, HOMA, lipid profiles. As well as significantly improving glucose and insulin tolerance, glycogen content, glucose uptake by skeletal muscle, serum insulin and HDL-c levels.

High cholesterol levels in the body are very bad and can lead to heart problems. Boiling Siam weed in water and drinking it is a sure and effective way to reduce your cholesterol levels. Research on rats suggested the anti-cholesterolemic effect of aqueous extract of the leaves of Siam weed. Research concluded that Siam weed may be beneficial in lowering cholesterol and prevent cardiovascular complications.

Siam weed can help in dealing with ulcer effectively, as it helps kill Helicobacter Pylori, which is a bacterium that causes ulcer. It also helps to prevent the possibility of a relapse.

Cervical cancer is one of the diseases that are quite dangerous for women. The use of Siam weed is very effective in the fight against cervical cancer due to its anticancer effect or property.

Siam weed is considered as one of the powerful clotting agent and can help to stop bleeding in very little time. Due to this reason it is often used as a form of local first aid. Just rubbing the leaves on fresh injuries and wounds would help to stop the bleeding and would also sterilize the wound. Many medical researchers have confirmed the wound healing abilities of Siam weed.

The nutrition contents in Siam weed leaves are very good for those of you who suffer from stomach-related diseases or nuisances.

Siam weed helps to reduce blood pressure and helps to maintain a healthy balance. This makes it very beneficial to those who are hypertensive.

Siam weed helps to cure foot rot speedily. Squeeze it in your palm and apply it on the affected area. You will see results in 3 days.

11. Maintains or protects the Reproduction Organ

The health of reproduction organs is one of the very important things that need to be aware of especially the women. The chemical and the nutritional effects loaded in Siam weed helps to maintain the reproductive organ. One can consume the Siam weed brewed water to get these results.

Siam weed is loaded with super chemical and nutritional effects and for that matter the regular consumption of its makes it very reliable for fighting vertigo diseases. You can cure the disease by drinking the Siam weed brewed water.

Manual slashing, use of bush-cutter or tractor-drawn implements are commonly used methods of control. Slashing causes rapid regeneration unless followed by other methods to suppress this weed for an extended period. Manual weeding is labor intensive. Use of tractor drawn equipment is limited to areas that are accessible.

Chemical control using herbicides applied at the seedling stage or on early regrowth has given encouraging results. Triclopyr has proven to be the most effective. However, problems in herbicide use include (a) the high cost of the chemicals and their application, (b) ecological concerns and, (c) non-compatibility in many cropping and other environmental situations.

Four insects have been released for biological control, the weevil Apion brunneonigrum, the fly Melanagromyza eupatoriella and two moths, Mescinia parvula and Pareuchaetes pseudoinsulata.  Of these, only the last has become established, fairly readily in Sri Lanka, Guam and other Micronesian islands, but with some difficulty in India and Sabah (Malaysia) and it has since spread unaided to the Philippines and Brunei. It failed to become established in Thailand, Ghana, Nigeria and South Africa.  It has produced spectacular defoliation and death of many plants in Guam and striking but sporadic defoliation in Sri Lanka.  In India, populations have built up but damage has seldom been great.  Where established, it is heavily attacked by a range of predators and these are believed to have prevented successful establishment in several countries.