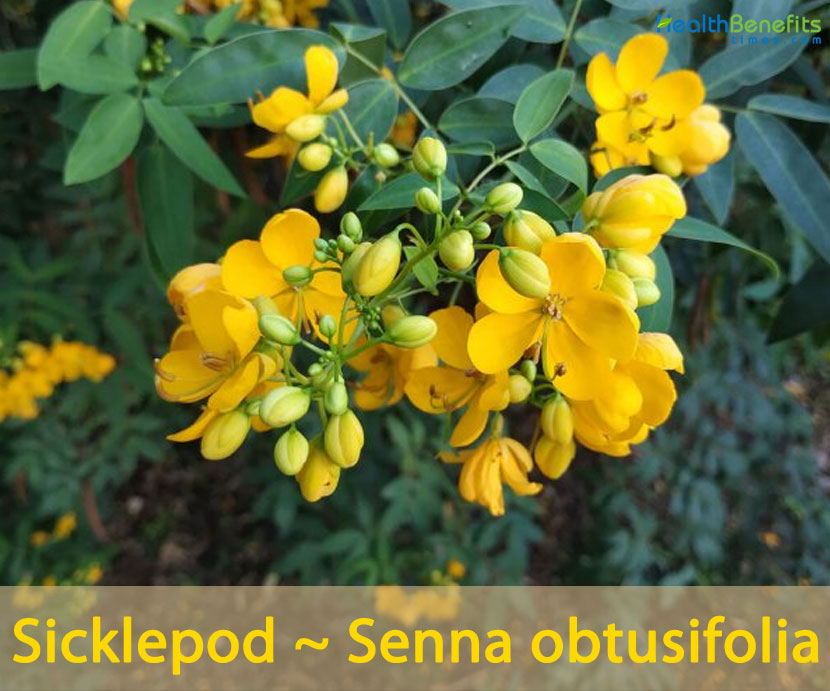 Senna obtusifolia, popularly known as sicklepod  or Chinese senna, is a sprawling, herbaceous perennial plant in the genus Senna, sometimes separated in the monotypic genus Diallobus and Fabaceae / Leguminosae (Pea family). The plant is native to Northern, southern and eastern USA, Mexico, Africa, Central America, the Caribbean and tropical South America. It is also widely naturalized in other parts of the world including south-eastern Asia (i.e. the Philippines, Papua New Guinea, Indonesia, Malaysia and Vietnam) and Oceania (i.e. the Galapagos Islands, Palau and Hawaii). It is considered a particularly serious weed in many places. It has a long-standing history of confusion with Senna tora and that taxon in many sources actually refers to the present species. Some well-known common names of the plants are Chinese senna, coffee weed, habucha, java bean, sicklepod, American Sicklepod, sicklepod senna, arsenic weed, foetid cassia, sickle senna, African foetid cassia, Low senna, Slimming Plant, blunt-leaved senna and foetid senna.

Senna obtusifolia has been treated under a wide range of different scientific names and common names. The Plant List currently itemizes a number of synonyms for this species including Cassia obtusifolia, Cassia tora var. obtusifolia and Diallobus tora. Specific epithet obtusifolia comes from the Latin words obtusus meaning dull or blunt and folium meaning leaf in reference to leaf shape. Common name of sicklepod is in reference to its curved, slender seed pods which are 4-6 inches long. Green leaves of the plant are fermented to produce a high-protein food product called kawal which is eaten by many people in Sudan as a meat substitute. In Asia its leaves, seeds, and root are used in folk medicine. As a traditional cure, the seeds are often roasted, and then boiled in water to produce a tea. Roasted and ground, the seeds have also been used as a substitute for coffee.

Compound leaves 8 to 12 cm long are alternately arranged along the stems and are borne on relatively short stalks that are 15-20 mm long. They have two or three pairs of leaflets that are 17-65 mm long and 10-40 mm wide, with those further from the leaf stalk usually being larger. Leaflets are obovate to oblong-obovate with asymmetrical bases, increasing in size from the base to the apex of the leaf, up to 6 cm long and 4 cm wide. The tips of the leaflets are bluntly oval to round, with a very small point at the tip of the main vein. Their surfaces may be either hairless or sparsely hairy and the entire margins are usually edged with tiny hairs. There is a small elongated structure (i.e. gland) 1-3 mm long located on the main leaf axis between the lowest pair of leaflets (occasionally also between the second pair of leaflets as well). There is an extra-floral nectary close to the lowest pair of leaflets on the upper side of each compound leaf. This nectary resembles a small brown spike. The foliage has a slightly rank odor.

The yellow flowers 10-15 mm across are borne on 7-28 mm long stalks. These flowers usually occur in pairs in the leaf forks and are generally located near the tips of the branches. They have five green sepals that are 5.5-9.5 mm long and five yellow or pale yellow petals that are 8-15 mm long. Each flower also has 10 stamens of which seven are fertile with anthers about 3-5 mm long that have a short narrow projection (i.e. beak) on one end and three are staminodes. Flowering occurs mostly from late summer through to late winter (i.e. from March to August).

The fruit is a slender, sickle-shaped, pod that is 6-18 cm long and 2-6 mm wide that is almost cylindrical in cross-section and sometimes slightly flattened or four-angled and curved downwards. These pods are initially green turning to brownish-green as they mature and are slightly concave between each of the numerous seeds. The seeds are 3-6 mm long, yellowish brown to dark red in color, shiny in appearance, and either diamond-shaped (i.e. rhomboid) or irregular in shape. The areole (marking on the seed coat) is very narrow about 0.3 to 0.5 mm wide.

The plant is utilized locally for a variety of reasons, principally as food and medicine, and it is occasionally cultivated for these purposes. The flowers are decorative and the plant is commonly planted as an ornamental near towns. 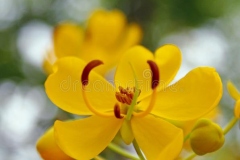 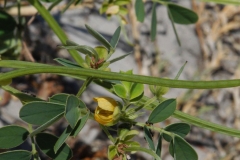 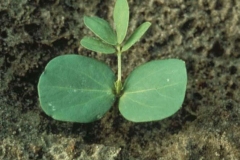 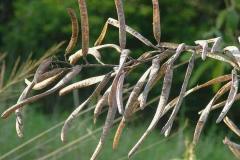 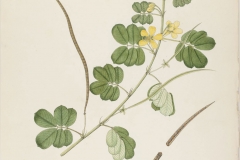 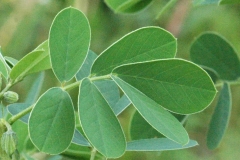 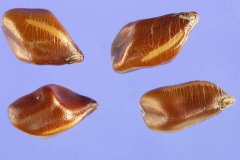 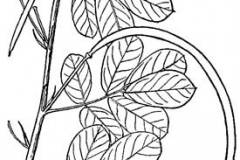 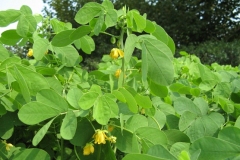 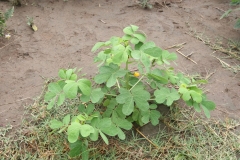 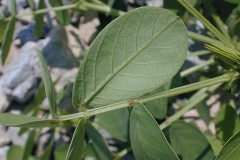 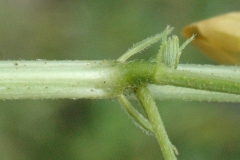 In herbal medicine, sicklepod may be used in a tea, or combined with other herbs for superior effect. It can be prepared by crushing the seeds into a powder, or be used as an extract, seed oil, or as noted, as a tea. Modern research has reported few health benefits after using sicklepod which are listed below

The cholesterol-lowering effect of Sicklepod supports the traditional use to support the heart and even the eyes. In humans, a Korean research evaluated Sicklepod in diabetic patients. Cholesterol levels fell as did LDL and triglycerides.

Researchers have recognized a protein in sicklepod that particularly targets and lowers cholesterol. The protein has been observed to prevent cholesterol creation similar to statins. The benefit noted by researchers is that this particular protein doesn’t lead to the adverse sides effects that statins often cause in muscle tissue.

Sicklepod provide some reasonable laxative effects. In one research, it has been shown to provide up to 89% of the effect of the more popular drug based on senna. Researcher noted the milder effect could make Sicklepod a potential laxative option for children and pregnant women who should not use the stronger senna.

The same anthraquinone compounds that supported the liver also showed an ability to protect DNA from damage. Glycosides, another compound in the herb, have also confirmed antioxidant effects.

Anthraquinones like those in Senna may be known for their laxative effects, but they also supply anti-microbial properties. Studies have confirmed these compounds help prevent bacterial and viral infection.

Traditional uses and benefits of Sicklepod

Control of Sicklepod is difficult and can be obtained only with a sustained combination of all available methods. Although repeated discing of summer fallows favors germination and emergence, and tends to reduce seed numbers in the soil, cultivation usually spreads rather than controls these weeds. Hence, single plants should be grubbed out before flowering. Hand pulling is difficult because of the deep, curved taproot, and plants can regrow from underground buds in the crown region. Larger colonies can be slashed but this does not eliminate Sicklepod. Slashing reduces plant vigor which, with a program of top dressing and restricted grazing, enables re-establishment of native pastures. As shading severely limits Sicklepod growth, late emerging seedlings can be somewhat suppressed by young soybean if the rows are narrow enough for rapid canopy closure.

Sicklepod has been a target weed for biological control, mostly in the USA. Alternaria cassiae, formulated as a mycoherbicide, has given >96% control of Sicklepod and increased the yields of soybean. Granular formulations of A. cassiae mycelia with sodium alginate + kaolin, applied pre-emergence, gave 50% control of Sicklepod in soybeans within 14 days and considerably increased crop yield. In greenhouse trials, an inoculum concentration of 10,000 spores/ml of A. cassiae gave 100% control of Sicklepod. Pseudocercospora nigricans has also been identified as a potential biological control agent.  Walker and Tilley recognized Myrothecium verrucaria as a potential mycoherbicide agent although it does affect a number of plant species including some economically important crops.

Hicks et al. show that a mixture of pyridate and 2, 4-DB acts synergistically on Sicklepod without increased damage to groundnut. It occurs in flushes, seedlings emerge after rainfall events, and few herbicides, including etribuzin, imazaquin, chlorimuron, flumetsulam, and glyphosate, provide adequate control and their efficacy can depend heavily on environmental conditions.