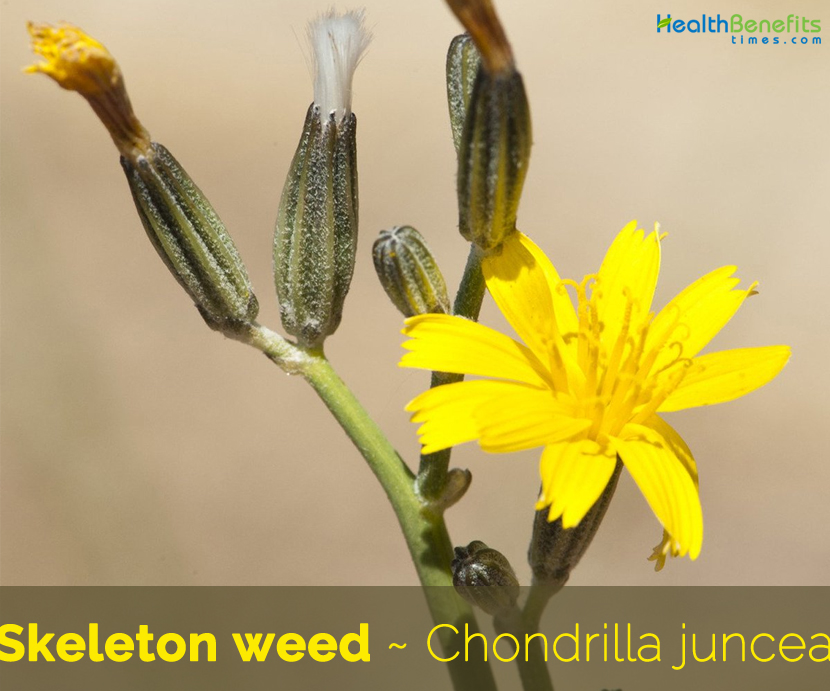 Chondrilla juncea is a species of flowering plant in the sunflower (Asteraceae) known by a number of common names, including Dandelion, Skeleton Weed, Chondrilla, Gum succor, Hogbite, Naked weed, Rush skeleton-weed, Skeleton-weed, Gum succory, Devil’s-Grass, Ajenjera, Ajinjera, Balaguera, Baleo, Citnik, Karavuk, Su porru, Tavka and succory. The plant is native to Western Europe, North Africa and central Asia. It is invasive in Australia, Argentina, Canada, New Zealand, South Africa and a number of states in the USA. It is known throughout most temperate regions of the world as an introduced species which is usually considered a noxious weed. Rush skeleton weed is a wiry-looking perennial that was introduced from Eurasia.

Skeleton weed is a long-lived, deep-rooted, herbaceous, thin, spindly, glaucous, rosette herb, perennial or biennial that grows about 16 to 60 inches (40-150 cm) tall. The plant is found growing in wasteland, in fallow, abandoned fields, along disturbed roadsides and eroded ground, croplands, semi-arid pastures, rangelands, irrigated grain fields and residential properties. The plant prefers coarse-textured, well-drained soils such as sand dunes and granite outcrops but can be found on a wide range of soil types except heavy clay soils.

Rush skeleton weed has a slender taproot, deep, persistent, with short lateral branches along the length. Taproots become somewhat woody with age and can penetrate soil to depths of 2-3 m or more. Most lateral roots are short-lived, non-woody, and less than 8 cm long, but a few lateral roots near the surface can become rhizome-like and grow laterally for 15-20 cm before turning downwards. Adventitious buds near the top of the taproot and on major lateral roots can produce new rosettes. Roots are easily fragmented, with pieces as small as 1-2 cm producing new rosettes from depths to 1 m. Stem is erect, ribbed, sub-terete or angular, scabridulous, hispid or toward the apex glabrous, strongly branched. Branches are ascending.

Rush skeleton weed forms a rosette of prostrate, glabrous leaves 1.6 to 24.7 inches (4-12 centimeters) long, 0.6 to 1.8 inches (1.5 to 4.5 centimeters) wide, and oblanceolate in shape. The leaf margins are deeply and irregularly toothed with lobes pointing backward toward the leaf base similar to the rosette leaves of dandelion. The leaf base narrows to a short, winged petiole. Basal leaves are well developed, 2 to 5 inches (4-13 cm) long and 0.6 to 1.8 inches (15-45 mm) wide, forming a rosette that is often deciduous at flowering. Stem leaves are lacking in some plants and when present are reduced, linear, 0.8 to 4 inches (2-10 cm) long and 0.04 to 0.3 inches (1-8 mm) wide. Stem leaves are also often deciduous, and upper leaves are often reduced to scale-like bracts.

Flowers are bright yellow and daisy-like with 9–12 ‘petals’. Individual flower heads are about 20mm wide. Flowers appear on short stalks, in the angle between the plant stem or branch and a leaf or bract. They may occur singly or in clusters of two to five flowers. Flowers are found along the full length of the branches and at the tip of the main stem, appearing from July to September.

Fertile fruits are followed by achene oblong, tapered at both ends, lacking hairs, pale to dark brown, and 3-4 mm long, with many lengthwise ribs, pointed tubercles near the top, and to 6 small scales at the apex, surrounding the point of beak attachment. Beak is slender, 5-6 mm long, not including the pappus which consists of many equal, fine, white hairs about 5 mm long.

Seeds are fragile and susceptible to mould and bacteria (causing desiccation in unfavorable weather conditions), and predation by insects and birds. If adequate summer rainfall occurs, seeds germinate quickly, but usually die if there are no follow up rainfall events. If no rain falls during summer and the seed remains viable and survives predation, it will germinate in the following autumn or winter. Seeds rarely survive more than 12 months under field conditions, so there is no long-term seed bank.

According to Picchi and Pieroni (2005), its human consumption was described together with the lettuce by Galeno (second century AD). These authors also mentioned that Mattioli, a famous Italian doctor of the sixteenth century, remarked that farmers from Tuscany were fond of this delight for the palate. However, Clusius (1576), the coetaneous Flemish botanist who traveled through Spain and Portugal, only mentioned its use for making brooms and a kind of glue for trapping goldfinches and other small birds in Salamanca. 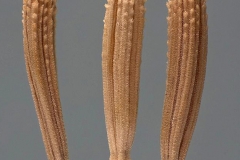 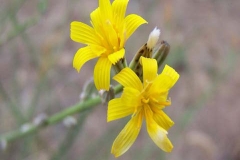 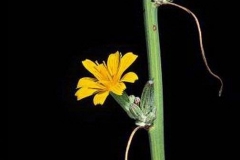 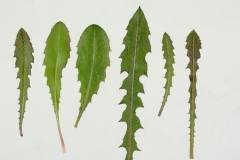 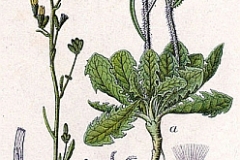 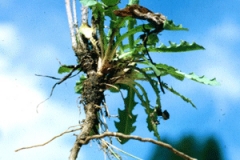 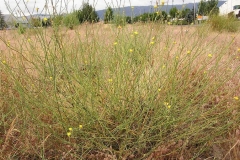 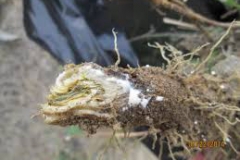 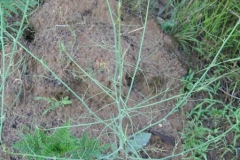 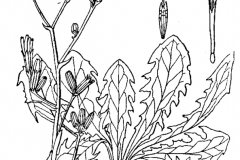 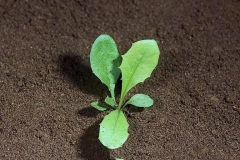 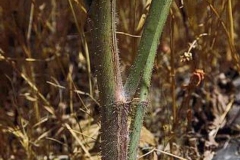 Once rush skeleton weed is well established, it is nearly impossible to eliminate due to its prolific seed production and far-reaching dispersal capabilities, as well as its deep, extensive root system and regenerative capabilities. Listed below are few of the popular methods of these weeds managements

Physical and mechanical control methods, by themselves, are not well suited for established populations of rush skeleton weed because mechanically harming the plant encourages budding on horizontal roots and causes root fragments to regenerate, eventually resulting in an increase in stand density. These methods can, however, be combined with other control methods for more effective control:

Herbicides are most effective on young plants (less than 5 years of age), on relatively small infestations, and when combined with other control methods. Herbicidal control is generally neither feasible nor economical on vast infestations and on remote or rough rangeland. Most herbicides perform best when applied to rosettes in spring and fall.

Moderate but continuous grazing of sheep and goats will result in more selective “mowing” of rush skeleton weed than a machine; however, if overgrazing is allowed to occur, desirable plant species can lose their competitive edge. While sheep are the hardiest grazers of rush skeleton weed, goats alone feed on the plants once they become woody. Cattle can be used to graze young rush skeleton weed plants, although they generally select grasses over forbs. Livestock should not be allowed to graze infested areas during flowering and seed set. Because rush skeleton weed quickly recovers once livestock grazing ceases, another form of control should be used to pick up where grazing leaves off. Mowing, biological control agents, or fall application of herbicides will augment the effects of grazing.