Trending
You are at:Home»Herbs and Spices»Facts and benefits of Skullcap 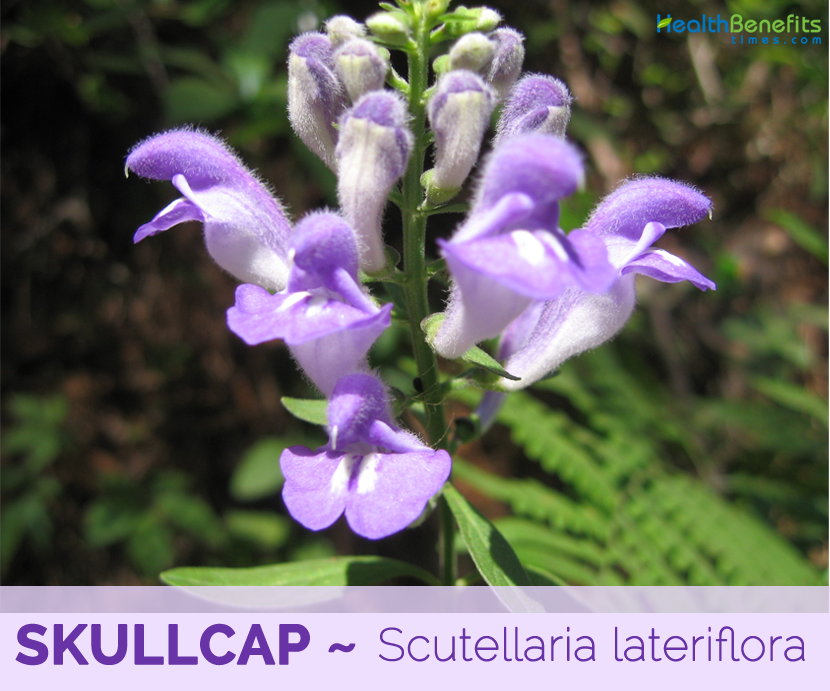 Skullcap is the name of a flowering perennial plant from the mint family, Lamiaceae. With the scientific name Scutellaria lateriflora, this plant can be found in North America’s wet habitats. Although it is widely distributed throughout large regions of North America, there are related species found as far away as China. There are a few names for skullcap, including hoodwort, quaker bonnet, helmet flower, European skullcap, greater skullcap, American skullcap, blue skullcap, blue pimpernel, hooded willow herb, side-flowering skullcap, mad dog weed and mad weed and Virginian Skullcap. Genus name comes from the Latin word scutella meaning a small dish or saucer in reference to the shape of the persistent calyx after the flowers fade. It was once used as a treatment for rabies and schizophrenia (hence the names maddog skullcap, maddog weed and mad weed.) The root of an Asian species (S. baicalensis) is frequently employed in Traditional Chinese Medicine. It has been used for more than 200 years as a mild relaxant and as a therapy for anxiety, nervous tension, and convulsions.

Skullcap is an herbaceous, slender, rarely shrubby, labiate plant that grows about 1 m in height. The plant grows in moist sedge meadows, openings in floodplain woodlands, soggy thickets, swamps, bogs, seeps and springs, edges of vernal pools and ponds, moist depressions in limestone glades, and shaded areas of cliffs. The plant grows well in sandy, rocky and dry soils, and in cultivated planting beds. It also prefers wet to moist soil with plenty of organic matter. The roots system consists of a taproot and rhizomes. Stem is light green to pale reddish-green, 4-angled, and hairless or sparsely canescent; they have a tendency to sprawl.

Blades of the opposite leaves are up to 7.5 centimeters long by 5 centimeters wide, they are cordate-ovate to broadly lanceolate, hairless, and coarsely serrated along the margins. On the upper surface of each leaf blade, there is a conspicuous network of veins. The petioles of the leaves are light green to pale reddish green, slender, and up to 1 inch long.

Blue lavender flowers are hooded, tube-shaped and two-lipped, with the upper lip forming a hood and the lower lip having two lobes. Flowering normally takes place from Jun to August. The flowers are replaced by a two-chamber seed pod containing four seeds. Most of the flowers do not appear at the top of the main stem, but are produced along the length of side branches that grow from the leaf axils. The aerial (above-ground) parts of the plant are collected during the flowering period and are used in herbal preparations in western herbal medicine. The root of an Asian species (S. baicalensis) is frequently used in Traditional Chinese Medicine. It has been used for more than 200 years as a mild relaxant and as a therapy for anxiety, nervous tension, and convulsions.

American skullcap has long been used in North America for anxiety and the promotion of relaxation. Skullcap is ideal to take before a nightcap so that you are wearing as many ‘caps’ as possible… One study found that blue skullcap and common skullcap when used in herbal tea could have an anxiety reducing effect across 19 volunteers.

Chinese skullcap has been used to help treat a large number of conditions and has been shown to be a useful anti-inflammatory. Thus it might be a soothing drink for those with conditions such as arthritis and bowel diseases which cause uncomfortable inflammation.

It has also been implicated in the treatment of cancer where it has been used in China historically. A recent study demonstrated that the tea may help to induce apoptosis in certain cancerous cells (cell death) which could potentially be beneficial in treating various cases. However it’s important to note that in different cancers the cells react differently and it is never advisable to attempt to self-medicate for cancer. Over 295 compounds have been isolated from scutellaria, which include flavonoids and antioxidants. However, with over 350 different species of skullcap it would be hard to know if you were using a genuine product. Speak to your doctor, and if you are interested ask them about the tea.

Skullcap is a minty perennial herb which has tiny purple flowers and offers many health benefits. The Skullcap herb has shown powerful antioxidant effects, helps calm nerves, treats fever, and has a synergistic effect that helps other herbs and supplements be better absorbed. Let’s take a closer look at some of the impressive health benefits of this amazing herb.

If you suffer from a nervous disorder, you may have experienced seizures or other spasmodic side effects that result from a problem in your nervous system. Skullcap tea helps to soothe the nervous system and prevent these episodes. It has been traditionally used to reduce seizure frequency and severity in those patients. Adding skullcap to drinking water once a day has also been related with this positive benefit.(1)

Insulin and glucose regulation is essential and it appears that skullcap is able to increase the production of insulin by the pancreas and helps to control the insulin levels in the body. Additionally, it has been linked to lower cholesterol levels, which is an aggravating factor in diabetes.(2)

Skullcap has some pretty effective anti-inflammatory properties. Many who suffer with arthritis and inflammatory bowel diseases are using skullcap as a home remedy. Research has shown benefits to those who have Alzheimer’s disease and Parkinson’s disease due to its anti-inflammatory effects.(3)

Skullcap is an herbal remedy that has been known to encourage apoptosis (sudden cell death), in cancerous cells and is used for natural treatment of cancer. This action is supposed to be caused by the antioxidant flavone components of the herb. This herb avoids the spread of cancerous cells and slows tumor growth, thus giving other cancer treatments a chance to take effect and win the ultimate battle against the disease.(4)

Skullcap tea is a wonderful method to balance the hormones in your body, as it encourages the release of endorphins and generally balances your mood. If you are feeling worked up for no reason, and continually feel tense, then perhaps what you need is a simple cup of tea. Phenolic compounds can have a wide range of effect on our hormonal balance, as they happen to be rich in antioxidant compounds. There are many herbs such as saw palmetto that can provide relief from stress and anxiety.(5)

Skullcap helps to reduce the level of cholesterol in the heart. It helps to lower the chances of atherosclerosis, heart attacks, coronary heart diseases, and strokes that frequently accompany the build-up of plaque in the arteries.(6)

7. Can Help You Get Some Shut-Eye

Although skullcap may help with anxiety, it can also help those who experience insomnia and other sleeping problems, such as restlessness, muscle tension and clenching the jaws. Skullcap tea or tincture could be useful before bed to help you relax, ward off any anxiety and give you some well-deserved and much-needed sleep.(7)

If you are looking for a way to detoxify your body and boost your overall health, skullcap tea may be just the thing. Skullcap has been related with an increased antioxidant activity in the liver, which is one of the slowest-recovering organs, and this effect can considerably boost the efficiency of your liver. This helps to reduce toxin levels in the body and blood, thus improving overall health and wellness. (8)

Although the research on this particular aspect of skullcap is still unclear, it appears that the reduction of triglycerides motivated by this herb can help with rapid weight loss when combined with a proper diet. This research is ongoing but presents an option for those looking for new ways to lose weight.

Research shows that Ayurveda techniques and treatments using herbal medicine, such as skullcap, may be helpful in treating epilepsy. Specifically, skullcap is an Ayurvedic herbal preparation that’s been described as being used for epilepsy treatment. In addition, Ayurvedic ingredients were combined using a base of honey and herbal ghee. This cocktail of herbal ingredients clearly help to reduce tremors, muscle spasms, nerve-related symptoms and headaches, ultimately aiding in the treatment of side effects caused from epileptic patients.

An animal research in Laurentian University in Canada showed that skullcap help to reduce the risk and occurrence of seizures. Male rats were given skullcap for a period of time after being diagnosed with epilepsy and did not have seizures, while those not given the herb did. Interestingly, when the treatment was removed, seizures did occur.(9), (10)

Skullcap possesses certain analgesic properties, meaning that consuming it can help to relieve pain throughout the body, partially through a reduction in inflammation. However, you can form a paste of the dried one and apply it directly to the areas that are experiencing pain. This can be a major boost for the healing of wounds or if you are recovering from an injury. Also, small scrapes and bruises can be healed more rapidly by applying it topically, as the rich phenolic compounds and flavones stimulate blood flow to the skin and help prevent infection.(11)

Health benefits of skullcap also include the ability to protect nerve cells against damage related to Parkinson’s disease that is considered to be a chronic condition causing tremor, the stiffness of the trunk and limbs, slowing of movement, and impaired balance and coordination. It is because this herb contains an antioxidant called baicalein that is very helpful for limiting the occurrence of this specific disease.

Traditional uses and benefits of Skullcap

Skullcap is available in powder or liquid extract form and as a dried herb. It is commonly sold in capsule form as well.

Children may use skullcap but in small doses. The best method of delivery is a mild tea. The child’s physician should be consulted before use.

To make a medicinal tea try adding one pint of boiling water to 1 oz. of the dried herb and steep for 10 minutes. This can be served in half cup servings every few hours.

For children add 1 cup boiling water to 1 tsp. of dried leaves and steep only 2 minutes to yield a milder tea.