Trending
You are at:Home»Foods»Snail Health benefits and nutrition 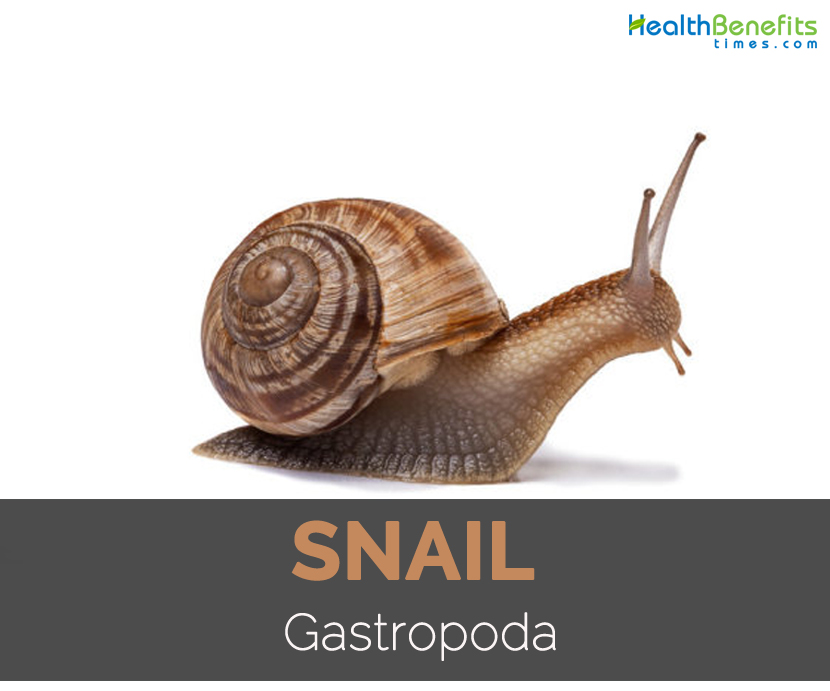 Snails are largest Mollusk subgroup containing 10,000 species and 400 living families. Globally they are distributed in every habitat, under water and on land. Most aquatic and marine animals are benthic in which few are swimmers. It encompasses myriad of lifestyles from predators to algae grazers and incredible diversity of form. Usually the shell is coiled but not always in the right handed direction. An operculum is also present sometimes, a door that fits in opening of coiled valve and shutting animal inside for defense. Some snails have entire shell internal and are covered with skin. The groups which lack protection of shell such as nudibranches are elaborately colored which assist them to blend with similar colored background and warn predators of noxious taste.

The meat of snail is considered to be high quality food packed with protein and is also a great source of iron. It contains 15% protein, 80% water and 2.4% fat which make it an alternative food for people requiring high protein low fat diet. Snail is rich in essential fatty acids such as linolenic acids and linoleic acids.

Usually gastropods have single, spirally coiled shell but shell is reduced or lost in some groups. Most of the snail has operculum, a plate which closes gastropod’s opening. Gastropods (shelled) have mantles and those without shells have decreased to absent mantles. Most species of Gastropods have muscular food which is used for creeping. The foot is modified for burrowing and swimming. Gastropods have well-developed head which includes eyes at end of 1-2 pairs of tentacles.

Snails have true coelm, a body is divided into three parts of head, muscular foot and visceral mass and organ systems for respiration, circulation, excretion, digestion, reproduction and nerve conduction. Its body plan has torsion or twisting during larval development by visceral mass that twists 180 degrees in relation to head and bringing mantle cavity to anterior of animal. Renal & anal openings and gills are near the front of animal. Mostly snails are herbivorous in nature but many marine species and few land species may be carnivores or omnivores. Snail uses its radula to break its food. Radula is a chitinous structure which contains microscopic hooks known as cutculae. The snail scrapes at food with this and then transferred to digestive tract.

Snails have 1-2 pairs of tentacles on heads. In land snails, eyes are carried on the tips of first set of tentacles and are roughly 75% of width of eyes. Second set of tentacles operates as olfactory organs. Land snails have both set of tentacles. Snail has cerebral ganglia which form a primitive sort of brain that has been divided into four sections. This structure is simple in comparison to brains of mammals, birds and reptiles. Snails are able of associative learning.

They move by alternating body contractions by stretching with low speed of 1 millimeter per second. They create mucus to support locomotion by lowering friction. The mucus also lowers the chances of injury of snail. They have mantle which covers internal organ known as foot.

In wild, snails consume various different foods such as fruits, leafy vegetation, carrion and manure. They create damage to agricultural crops as well as garden plants and are considered as pets.

Some species lay eggs which contain large yolk. The eggs development might be within body or might be expelled externally to develop. Eggs develop into larvae. While larvae, those species develop shell. When animal develops, it adds another curl of shell ending in an opening from which foot or head of the animal emerge.

Snails are sexual and some are hermaphroditic which means single individual can produce both eggs and sperm. Individuals exchange sperm with other individual instead of fertilizing themselves.

Snails offer low calorie source of protein which is required for repairing and building muscles. It helps to fill better than fat and carbs.

Snails are a great source of iron which is essential to build red blood cells and for transporting energy throughout the body. The deficiency of iron results in anemia and extreme fatigue. Iron is a component part of haem groups of carrying oxygen proteins such as myoglobin and haemoglobin and electron carrying mitochondrial protein cytochrome. Iron has a vital role in coupled oxidations or reductions in such process as oxygen transport or cellular respiration. Iron-sulphur enzymes act as elctrontransferring reactions of mitochondria. Iron is available in intracellular cytochrome enzyme system with vital role in energy production as well as cellular respiration. Literally, iron from animal sources could be absorbed more in comparison to vegetables and cereals as the iron from plant sources are complexes with oxalates and phytates in plant. It makes a great source of iron in diet.

Vitamin B12 is required for production of red blood cells, keeping nervous system healthy and releasing energy from food we eat and processing folic acid. Snails are loaded with vitamin B12.

Snails are a great source of magnesium in which bodies are required for maintaining normal blood pressure, regular heartbeat and strengthen bones.

Selenium found in bodies helps to keep immune system healthy and protects cells from damage. Snails contain selenium in it.

The crude protein content was determined with the use of Soxhlet extraction apparatus to extract crude fat thoroughly from 4 of milled snail sample using petroleum ether in soxhlet method of fat determination. The fat content weight extracted divided by weight of sample multiplied by 100% gave percent crude fat content. Ash is determined to be incinerating 5 g of milled snail sample at 550 oC overnight in muffle furnace. Weights after and before ashing are used to calculate per cent content of ash. Drying 2 g of milled snail sample 105 oC for 3 h with the use of thermostatically controlled forced air oven determined moisture content. Weight difference after and before drying was used for calculating per cent moisture content. The obtained total carbohydrate was 100% by subtracting per cent amounts of crude fat, crude protein, ash and moisture. Snail sample’s energy value was obtained by multiplying per cent composition of fat, protein and carbohydrate.

Copper is a part of tyrosinase enzyme i.e. essential for melanin pigment formation in body. It is a part of lysyl oxidase molecule and other enzyme systems. Copper has a vital role in promoting normal function of connective tissues of bone. Snail meat is a great source of copper and is used to combat malformation of bone structure. It stimulates utilization and absorption and synthesis of iron into cytochrome molecules and haemoglobin.

Above 80 enzymes such as carbonic anhydrase, alcohol dehydrogenase, RNA and DNA polymerases and carboxypeptidase are considered to require zinc. The high concentrations of zinc in sperm cells, prostate gland and eyes where it is assumed to play vital function and all tissues of body. Zinc with vitamin A has a role in night vision and dark adaptation. People consume snail meat for curing eye problems.

About ninety nine per cent of calcium is present in teeth and bones and one percent is found in body fluids and soft tissues. Calcium is found abundantly in A. achatina. Calcium is required for normal blood clotting. Snail meat fluid is used for stopping bleeding from cuts. The lower blood calcium level promotes nervous tissue irritability and low calcium level causes convulsion. Calcium depress nerve irritability.

Snail is a great source of calcium ortho phosphate which is a chemical substrate used to cure kidney diseases. The serving size of 200 grams of dried snail in the diet offers daily requirement of calcium to lactating and pregnant women and also teenagers.

Potassium is a key intracellular action and with sodium, it has an essential role in regulating water and acid base & electrolyte balance in the body. Basically, potassium is required for lowering both diastolic and systolic blood pressure in people with high and normal blood pressure. Potassium lowers salt sensitivity which is an independent risk factor causing heart disease. It influence contractility of skeletal and cardiac muscles and affect excitability of nervous tissue. The deficiency of potassium results in muscular weakness, mental disorientation, increased nervous irritability and cardiac irregularities.