Trending
You are at:Home»Herbs and Spices»Spicebush facts and health benefits 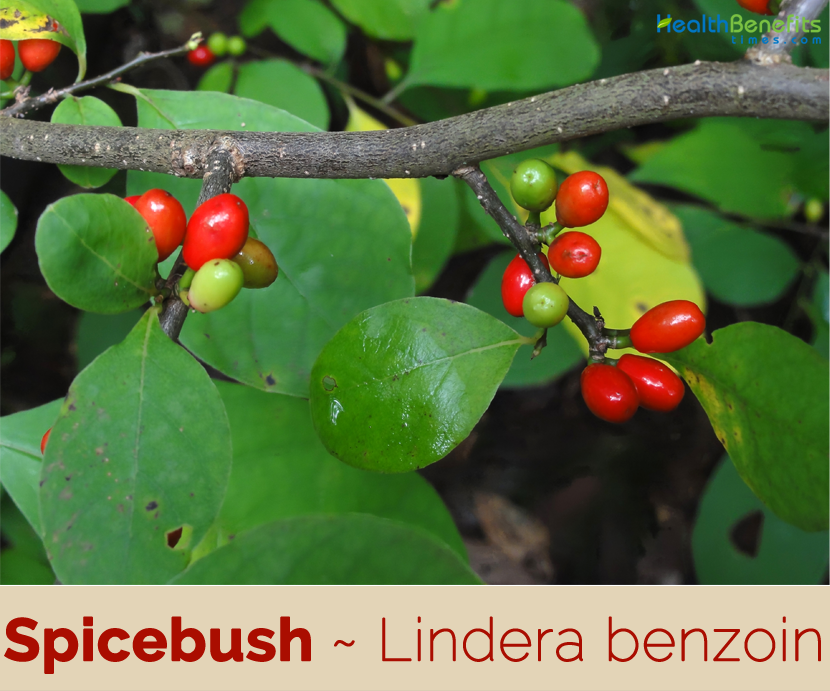 Lindera benzoin commonly known as Spicebush is a flowering plant in the family Lauraceae. The plant is native to eastern North America, ranging from New York to Ontario in the north, and to Kansas, Texas, and northern Florida in the center and south. Few of the popular common names of the plant are Benjamin Bush, Northern Spicebush, Snap-Wood, Spicebush, Spicewood and Wild Allspice. In 1783, Carl Peter Thunberg honored Johann Linder (1676-1724), a Swedish botanist and physician, by naming the genus Lindera in honor of him. The specific epithet benzoin is an adaptation of the Middle French benjoin (from Arabic luban jawi) literally “Java Frankincense” and refers to an aromatic balsamic resin obtained from several species of trees in the genus Styrax.

Spicebush is a medium-sized deciduous, multiple-stemmed twiggy shrub that grows about 5 m tall. The plant is found growing in rich deciduous woodlands, wooded bluffs, bottomland forests along rivers, wooded slopes (usually toward the bottom), gravelly seeps in shaded areas, stream banks, low woods, margins of wetlands and uplands. It prefers fertile loamy soil with decaying organic matter. It is adaptable to cultivation in yards and gardens. The plant has woody roots that are shallow and much branched. Stem has greenish tan with light colored lenticles. Bark is brown, shiny, and sparsely covered with small white lenticels. Slender branchlets are shiny and brown; their lenticels are white, dot-like, and insignificant.

Yellow flowers are perfect or dioecious (male & female flowers on separate shrubs); they occur in small clusters along the branchlets before the leaves develop. Individual flowers are less than ¼ inches across. Each flower has 6 yellow sepals with a petal-like appearance and no petals. The male flowers have 9 stamens (organized into 3 groups), while the female flowers have an ovary with a single style and up to 18 pseudo-stamens. Each fertile flower is replaced by a fleshy ovoid drupe with a single stone; this drupe becomes red when it is mature during the late summer or fall. This shrub reproduces by reseeding itself. The leaves, buds, and new growth twigs can also be made into a tea.

Traditional uses and benefits of Spicebush