Trending
You are at:Home»Herbs and Spices»Spirulina facts and health benefits 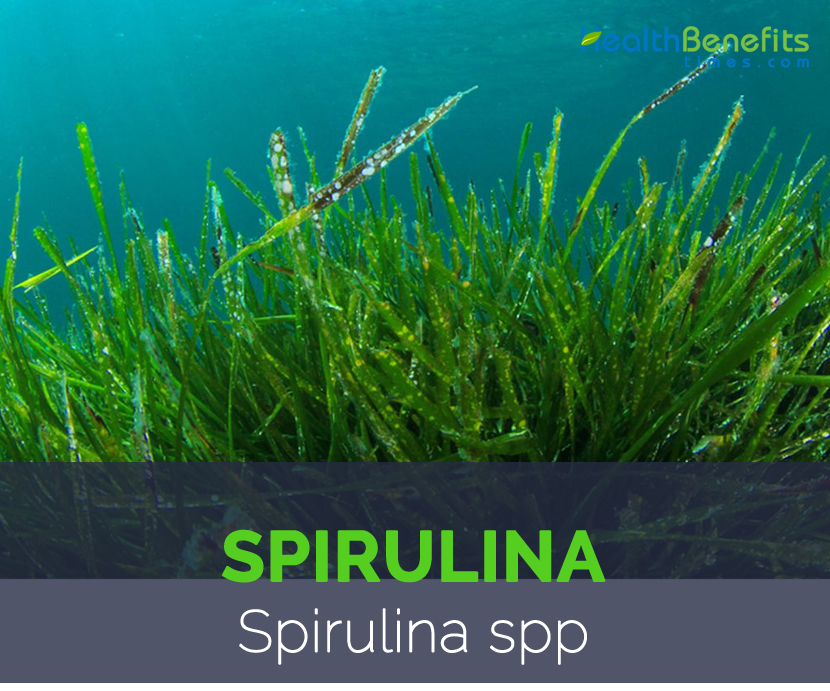 Spirulina is blue-green algae with a perfect spiral shape. Actually spiral shape is the reason for the name Spirulina. It belongs to a cyanobacteria species and it is scientifically known as Arthrospira platensis. Other subspecies are Spirulina maxima and Spirulina geitleri. They are generally found in alkaline lakes in Mexico and Africa. It is rich in nutrients like proteins, carbohydrates, vitamins, minerals, and trace elements. It can survive in the harshest conditions, both environmentally and chemically. It can endure extreme alkaline conditions, highly saline waters that contain 30 grams to 270 grams of salt per liter and still survive.

Since this microorganism consists of chlorophyll like other higher plants, botanists categorize it as a microalga that belongs to Cyanophyceae class; but according to bacteriologists it is a bacterium because of its prokaryotic structure. Spirulina is an exceptional simple extract of blue-green algae and has been broadly researched and is now in extensive usage throughout the world as a food product and as a dietary supplement.

Spirulina is supposed to be a photosynthetic species about 3.5 billion years old. It is also guessed that such species were liable for releasing oxygen into the atmosphere on the early Earth.

This miraculous food first noticed during 1940s in French Equatorial Africa, when French troops tripped upon a food that the locals were growing. It was growing on the surface of lakes and it was being collected, sun-dried and sold in the local markets. Later biologists concluded that it was an alga that was being grown and eaten. It is also the food of local birds, like flamingoes.

Spirulina geiteleri was discovered in the alkaline lakes in Mexico and it was also being consumed by the locals. Ancient writings revealed that it was consumed as food even during the time of the Spanish defeat during the 15th century. Even Columbus’ personal literature revealed roughly about an ooze-like substance being collected from lakes, sun-dried and baked like bread. Now, Spirulina is promoted and consumed in numerous countries like Belgium, Germany, Egypt, Brazil, Argentina, Chile, France, Philippines, Spain, Canada, Africa, United States, Ireland, India, and other countries, where public administration, sanitary organisms and associations have permitted human consumption.

Spirulina is extremely good for our overall health. It is loaded with nutrients that can have powerful effects on your body and brain. Few of the health benefits of Spirulina are listed below:

Oxidative damage can harm both DNA and cells. This damage may result in chronic inflammation, which results in cancer and other diseases. Spirulina is a wonderful source of antioxidants, which can protect against oxidative damage.

After a closer look of Spirulina, it is revealed that this spiral-shaped blue green algae had thinner cell walls or cellulose compared to its plant cousins. Cell wall is made of mucopolysaccharides, which are complex sugars. Therefore, even the cell wall in spirulina can be digested, unlike the cellulose in plants. It is also helpful for probiotic bacteria, like lactobacillus, which live inside our digestive system.(5)

Heart disease is presently the world’s biggest killer. It is known that numerous measurable factors, called risk factors, are related to an increased risk of heart disease. However, Spirulina has been shown to have beneficial effects on many of them.

Regular use of Spirulina can lower total cholesterol, LDL cholesterol and triglycerides, while raising HDL cholesterol. In a research of 25 people with type 2 diabetes, 2 grams per day of spirulina considerably improved these markers.

Mercury poisoning is a concern for most animals, including man. Inorganic mercury concentrations are found mainly in kidneys and they are the worst affected organs. Research has shown that spirulina considerably decreases the levels of mercury chloride-related toxicity and renal damages caused by toxicity in mice.(10)

Many researchers suggest that spirulina have anti-cancer properties. Research carried out on animal shows that it can decrease cancer occurrence and tumor size. Spirulina has been mostly researched with regard to oral cancer.

One study looked at the effects of spirulina on 87 people from India with precancerous lesions called OSMF in the mouth.

Research on people with precancerous lesions called OSMF in the mouth concluded that after using 1 gram per day for 1 year, 45% of the spirulina group had a complete deterioration of lesions in the mouth, compared to only 7% in the control group. When they stopped taking the spirulina, nearly half of the responders developed these lesions again the following year.

Another research on 40 subjects with OSMF precancerous lesions, 1 gram of spirulina per day led to greater improvement in symptoms than the drug Pentoxyfilline.(11), (12), (13), (14)

High blood pressure is an important reason of many killer diseases like heart attacks, strokes and chronic kidney disease.

However a dose of 4.5 grams per day is shown to decrease blood pressure in individuals with normal blood pressure levels. It is supposed to be driven by an increased production of nitric oxide, a signaling molecule which helps the blood vessels relax and dilate.(15), (16), (17)

Spirulina extracts have antimicrobial features. Extracts from spirulina have been successfully tested against viruses that affect both humans and monkeys. Viruses like herpes simplex virus, mumps virus, influenza virus, human cytomegalovirus, measles virus and finally HIV-1 viruses were managed to a major extent. Now, spirulina extracts are considered as medicine for HIV positive patients so that they can live an extended life.

Allergic rhinitis is considered by inflammation in the nasal airways. It is caused due to environmental allergens, like pollen, animal hair or even wheat dust.

Spirulina is a common treatment for symptoms of allergic rhinitis, and there is evidence that it can be effective. In a research of 127 people with allergic rhinitis, 2 grams per day dramatically reduced symptoms like nasal congestion, nasal discharge, sneezing and itching.(18), (19)

There are several forms of anemia. The most common one is characterized by a reduction in hemoglobin or red blood cells in the blood. Anemia is mostly common in the senior, resulting to prolonged feelings of weakness and fatigue.

In a research of 40 older people with a history of anemia, spirulina supplementation increased the hemoglobin content of red blood cells. Immune function also improved.(21), (22)

During treatment for cancer, doctors may suggest chemotherapy. Cisplatin is a chemotherapeutic agent used in chemotherapy that may cause toxins to pile up in kidneys. The intake of spirulina decreases the side effects caused by cisplatin.(23)

Exercise-induced oxidative damage is a major cause to muscle fatigue. Certain plant foods have antioxidant properties that help athletes and physically active individuals decrease this damage.

Spirulina seems to be beneficial, with some researches showing improved muscle strength and endurance. Spirulina was shown to enhance endurance; considerably increasing the time it took for people to become fatigued in several researches.

Another research found that spirulina supplementation increased muscle strength, but did not have any effect on endurance.(24), (25), (26)

Research shows that spirulina helps in decreasing ischemia, a disorder where the blood supply to the tissues gets restricted.(27)

In a research of 25 patients with type 2 diabetes, 2 grams of spirulina led to a remarkable reduction in blood sugar levels.

Diets high in nutrient-dense protein-rich foods like spirulina encourage weight loss and low-fat stores through a variety of mechanisms. Because it takes more energy to metabolize, for example, consuming protein helps maintain lean tissue and contributes to fat burning.

It also limit hunger and overweight persons seem to benefit the most. To maximize this benefit, try eating your high protein spirulina in the morning or during midday instead of at night.(33)

Spirulina is extremely beneficial to control bronchial asthma. Research has shown that administering spirulina extracts at 1 gram per day have nearly an equal effect on bronchial asthma as medication does. This is accurate in case of mild and moderate asthma.(34)

However Spirulina is a safe and healthy source of protein and micronutrients, body could react to it depending on your current state of health.

Since your metabolism will be increased after taking Spirulina, there is a potential that you may experience symptoms of slight fever as your body temperature rises faintly.

Spirulina help to flush out any waste that have gathered in your colon, meaning it could turn your waste green. Additionally, your waste may have a slight greenish hue, due to the chlorophyll concentration.

These are only short-term, as a result of your colon being flushed of toxins and waste. In the long run, taking a Spirulina supplement will clear your skin.

This is also temporary. You may experience this as a result of your colon being cleansed. This will quickly pass.

It is not known with accurateness when human started to use microalgae. Reports say that it was used as food in Mexico during the Aztec civilization nearly 400 years ago. A member of Hernán Cortez´s troops, reported in 1521, that it was harvested from the Lake Texcoco, dried and sold for human consumption in a Tenochtitlán (today Mexico City) market. In 1940, a French phycologist Dangeard issued a report on the consumption of dihé by the Kanembu people near Lake Chad. Scientist Dangeard, also noted these same algae populated a number of lakes in the Rift Valley of East Africa, and was the main food for the flamingos living nearby those lakes. Twenty-five years later during 1964-65, a botanist on a Belgian Trans-Saharan expedition, Jean Léonard, stated finding a curious greenish, edible cakes being vended in native markets of Fort-Lamy (now N’Djamena) in Chad. According to the locals these cakes came from areas near Lake Chad, Léonard recognized the connection between the algal blooms and dried cakes sold in the market. It is still being used as food by the Kanembu tribe in the Lake Chad area of the Republic of Chad where it is sold as dried bread called “dihe”. In 1967 Spirulina was recognized as a “wonderful future food source” in the International Association of Applied Microbiology. This traditional food is now widely cultured throughout the world.