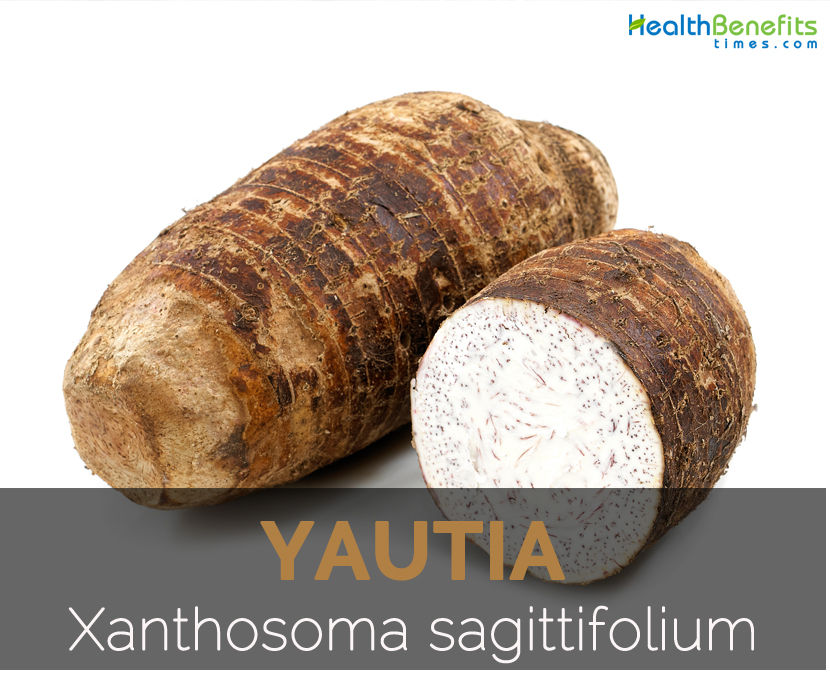 It is a lactiferous, unarmed herb which prefers tropical and sub-tropical climates with well-drained and fertile soils. The roots are tuberous, fibrous and fairly extensive. The fruit of this plant is a small and yellow berry. It is widely used for the consumption purpose and added to various recipes.

Inherent to Northern South America, it extent to Mesoamerica and the Caribbean and then introduced everywhere to Asia, Africa and Pacific.

Firstly, it was cultivated in Tropical America which spread in mid 1800s to Africa. It is also cultivated in Philippines.  They are quite famous in Cuba and Puerto Rico.

Yautia is an herbaceous, stout and perennial herb which grows up to 1.5-2 m in height. The plant have arrowhead to heart shaped leaves which are glabrous, 90 cm long and 60 cm wide. The leaves are thick and dark green. The stems are thick, underground and tuberous. Tubers have dark brown-orange skin which possesses wiry hair. The flesh inside the corm is white. The spathe is 15-25 cm long whereas spadix is 15 cm in length.

Yautia is rich in copper, vitamin B6, carbohydrates, potassium and iron. It is considered as the lowest allergenic food which makes it a good diet for the people who experience various food allergic situations. It enhances the energy and maintains the level of blood sugar. It helps to maintain gut and manages blood pressure.

The pathways such as galactose and dopamine are affected by the copper. These neurotransmitters help to maintain energy, happy mood, outlook and focus. The deficiency of copper leads to fatigue, low metabolic activity, poor mood and problem in concentration. Copper helps to utilize antioxidants such as superoxide dismutase, Vitamin C, tyrosinase and ascorbate oxidase. These helps to prevent the damage caused by free radicals in the brain and also slows down the aging process and neurodegenerative disease.

Copper is essential for the function of thyroid because it balances the activities of thyroid by working with other minerals such as calcium, potassium and zinc. It also prevents the health conditions such as hyperthyroidism or hypothyroidism. If any of the minerals are excessive in the body then one can suffer from thyroid which leads to weight loss or gain, fatigue, change in appetite or body temperature and other symptoms.

The research shows that Vitamin B6 has a serious impact on the production of GABA neurotransmitters and serotonin in the brain. These hormones help to maintain the mood and prevents from fatigue, pain, anxiety and depression. So vitamin B6 helps to prevent the mood disorders.

Vitamin B6 helps to produce the hormones which cure the brain diseases and mood disorders which arise from the deficiency in the neurotransmitter functions. The supplement of Vitamin B6 uplifts the mood, less pain, energy and concentration problem.

Vitamin B6 is essential for the production of hemoglobin in blood because the red blood cells assist in transporting oxygen to the cells and also mobilizes iron. Anemia is the situation caused due to the low presence of red blood cells and results in aches, pain and fatigue. An adequate intake of Vitamin B6 reduces the symptoms of anemia and also prevents it from developing.

The homocysteine develops in the absence of vitamin B6 that could damage the blood vessel linings which may lead to the stroke or heart attack. The homocysteine levels are reduced when vitamin B6 is intake with folate. It also helps to maintain the cholesterol and blood pressure level which are the main causes that leads to heart disease.

Potassium manages the heart activity which balances the circulation, rhythm of heart beats and blood pressure. The studies have shown that the diet which is rich in sodium and low in potassium contributes to the hypertension, high blood pressure and cardiovascular diseases. Potassium combines with the minerals such as magnesium and calcium which helps to prohibit the buildup of fluid in the cells. The deficiency of potassium leads to chest pains, irregular heartbeats as well as cardiac arrest.

Vitamin B1 tones the wall muscles of digestive tract. The digestive tract helps to absorb nutrients from the foods that enhance the immunity and prevent from sickness. Vitamin B1 also assists in hydrochloric acid secretion that is vital for the digestion of food as well as nutrient absorption.

Kidneys eliminate the organic molecules in the blood. It is essential for the functioning of kidneys and eliminates waste and toxins through the urine. The digestive organs and kidneys depend upon the electrolytes such as potassium, magnesium and phosphorus to balance sodium, fat and water in the body. Phosphate is found in the body as phosphate ions by blending with other electrolytes.