Trending
You are at:Home»Herbs and Spices»Top 12 Health Benefits of Star Anise 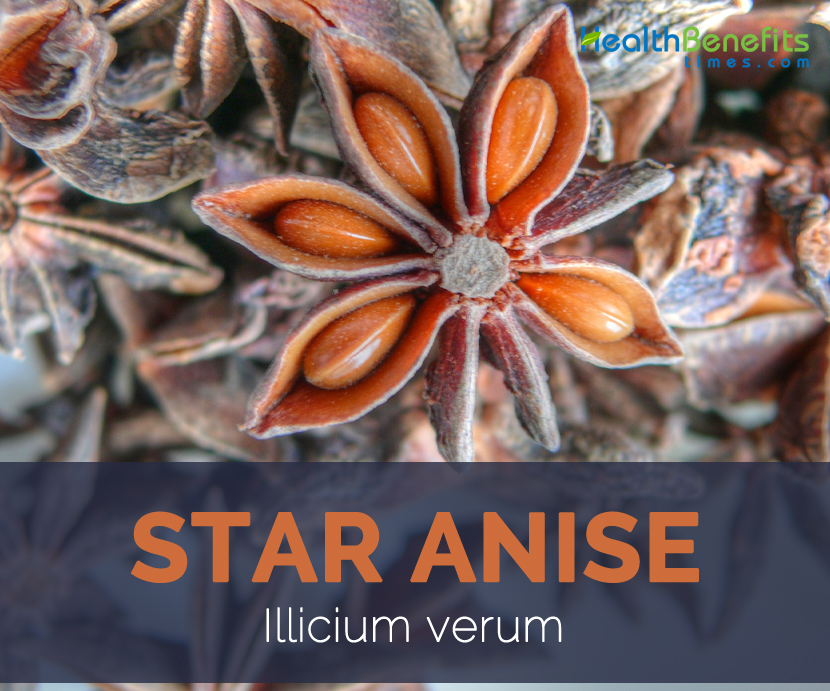 Illicium verum, commonly known as Star anise, star aniseed, or Chinese star anise is a spice that closely looks like anise in flavor, obtained from the star-shaped pericarp of Illicium verum. It is a medium-sized native evergreen tree of northeast Vietnam and southwest China. The star shaped fruits are harvested just before ripening and are dried before use. Traditionally used as a spice and also as a healing herb, star anise appears to have medicinal properties that provide it with significant health benefits. It is important to note that you should only use the Chinese variety as there are concerns regarding the toxicity of Japanese star anise.

Star anise tastes much like a standard anise seed, but slightly bitterer, which is why some chefs use it to provide a licorice flavor for some dishes. Some people think that star anise and anise seed are the same. While both spices contain an essential oil called anethole, their similarities end here. For starters, anise seed belongs to the Apiaceae family and star anise comes from the Schisandraceae family. Anise seed is used more in Western dishes, particularly in Greek and French cuisine, since it has an intense, aromatic flavor that’s good for sauces. On the other hand, star anise is more common in Asian cooking. The spice is added whole to dishes to let its flavor infuse your cooking, or ground and added more sparingly.

Star Anise is an evergreen medium sized tree, 8-15 (-20) m tall and a diameter of 25 cm with a straight rounded trunk and green, glabrous branchlets. Stem is erect, round and grooved and branched above. The bark is white to bright grey and straight rounded trunk. Leaves are 10-15 cm long, 2.5 – 5 cm broad, alternate, simple, leathery, often clustered 3-4 together at the end of branches. Flowers are large, bisexual, 1-1.5 cm in diameter, white-pink to red or greenish-yellow, axillary and solitary. Fruits are star shaped, reddish brown consisting of 6-8 carpels arranged in a whorl. Each carpel is 10 mm long, boat shaped, hard and wrinkled containing a seed. Seeds are brown, compressed, ovoid, smooth, shiny and brittle with high oil content and anise-like smell. It has characteristic licorice, anise-like flavor and sweet taste. The plant normally prefers warm, subtropical climate and grows well in humus- and compost-rich soil, with a texture that’s both loamy and well-drained.

It is a native of Egypt, Greece, Crete and Asia Minor and was grown by the ancient Egyptians, to China; star anise is today grown almost exclusively in southern China, Indo-China. It was well known to the Greeks, being mentioned by Dioscorides and Pliny and was cultivated in Tuscany in Roman times. In the middle Ages its cultivation spread to Central Europe. It was first introduced into Europe in the seventeenth century(1600S).The oil, produced by a process of steam extraction, is substituted for European aniseed in commercial drinks.

Star anise is a well-known digestive aid and used to relieve cramps, indigestion, gas bloating and indigestion.  Star anise seeds are abundant source of B-complex vitamins such as thiamin, pyridoxine, niacin and riboflavin and known to increase neuro-chemicals in the brain. It is enriched with anti-oxidant vitamins such as vitamin- A and vitamin-C. Listed below are some of the health benefits of Star Anise

Antioxidants fight against free radicals that may cause cellular damage and may be responsible for diseases like diabetes, heart problems or even cancer. It is continually being produced in our body as a metabolic byproduct. The excessive production and deposition can be neutralized only by consuming a rich source of antioxidants. Reports from India and abroad have shown a powerful antioxidant property of star anise. The antioxidant property is due to the presence of a chemical called linolool. Vitamin A and C also contributes to this property to a large extent.

When applied topically, star anise essential oil is an excellent treatment for rheumatism and back pain. Before using the essential oil it should be combined with carrier oil and massaged into the affected areas.

Star anise is quite beneficial for dealing with common problem of skin called candidiasis, caused by a fungus called Candida albicans. This fungus usually affects superficial skin, mouth, throat or even the genital areas. It was observed by some Korean researchers that Star anise essential oil and some extracts of star anise possess powerful antifungal property.

Star anise as an antibacterial agent has also been tested by many researchers and its oil has been found to be effective in declining cough due to asthma and bronchitis due to its expectorant property. Apart from that, star anise has been shown to be effective against almost 70 drug resistant bacterial strains.

Star anise is a good source of Shikimic acid and has a powerful antiviral property when it combines with another compound, quercetin, an antioxidant rich substance. Combination of these two chemicals helps to prevent influenza. In China and Taiwan, scientists are researching this combination for bird flu treatment.

According to traditional use and circumstantial evidence, star anise has mild sedative properties which can help your nerves to settle down and also ensure a good night’s sleep. If you are having difficulty getting to sleep, try a cup of soothing star anise tea before going to bed. It is one of the wonderful treatments for sleeping difficulty.

Star anise tea is one of the excellent natural remedy to ease a cough and soothe your sore throat. Simply prepare the tea and drink up to three times each day.

Star anise is often prepared as a tea particularly in South East Asian countries and China. It is mainly used to deal with a variety of digestive complaints such as gas, abdominal cramps, indigestion, bloating and constipation. To treat any digestive condition that you may be suffering from, it is considered best to drink the tea after your meals.

Star anise oil helps to maintain blood pressure level. It cuts down the pressure on the heart. Additionally, since the oil is detoxifying, it improves blood flow as well as keeps the heart healthy and balanced. The oil rejuvenates the heart and also keeps it lively.

Star anise has traditionally been used in China to help women during pregnancy and to new mothers wanting to increase their milk production. Traditional Chinese practitioners often recommend it for pregnant women.

It is used to boost their immune system and stave off illness during this important time. Researchers have also found that star anise had an estrogenic effect owing to a compound called anethole which helps to modulate hormonal functions in women.

For the control of the insulin plus some hormones, pancreas is a crucial organ. Anise seeds assist to encourage the pancreas. You’ve got decreased chance for diabetes along with other hormonal difficulties once your pancreas is within great health.

12. Beneficial for Colds, Flus and Other Respiratory Ailments

If you are prone to getting sick as soon as the cold season starts, then you will love star anise tea. It is a warm herb that has been traditionally used to help bring relief to the colds and respiratory congestions that keep you down. This is a tea that fights bacteria and viruses that are at the source of colds and flus and it helps to treat asthma, coughs, lung inflammation and bronchitis.

Other Traditional uses and benefits

Star anise is a star-shaped spice which is of a rich brown color with eight corners. It tastes much similar to the anise, however, a little bitter. Its scientific name is Illicium Verum which originates from the Latin word Illicio. This herbaceous spice has got some kind of very effective anti-bacterial agents that will make your seasonal infections disappear over time. In traditional Chinese medicine, star anise is prescribed as a digestive aid, promoting health of female reproductive organs and for lactating mothers to increase breast-milk secretion.