Trending
You are at:Home»Herbs and Spices»Health benefits of Stinking Toe Fruit 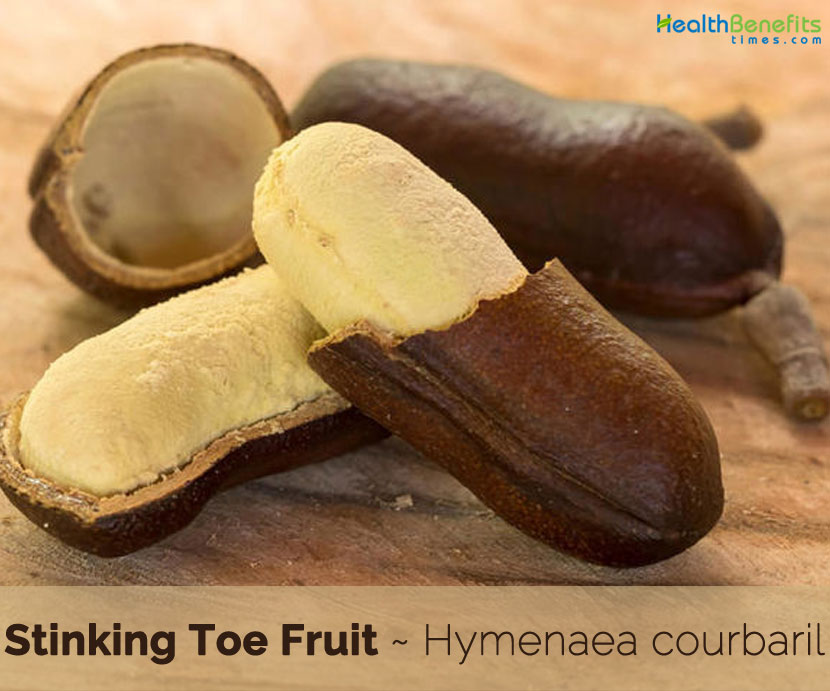 Stinking Toe Fruit or Jatoba scientifically known as Hymenaea courbaril is a huge canopy tree, growing to 30 m in height. Although it is occasionally denominated as Brazilian cherry and South American cherry it is not a cherry tree but a legume of the family Fabaceae. The plant is native to American tropics and is distributed in the West Indies, and in Central and South America from southern Mexico to Brazil. It is a popular plant with many names including West Indian Locust, umami-gum, Brazilian Cherry, South American Cherry, Jatoba, jatobá, stinking toe, algarrobo, azucar huayo, jataí, copal, Brazilian copal, courbaril, nazareno, Cayenne copal, demarara copal, gomme animee, pois confiture, guapinol, guapinole, loksi and South American locust. The name of the genus comes from the Latin himenaeus which means marriage, with reference to the leaves formed by two leaflets; the specific name is one of those used locally.

It is also known as stinking toe, old man’s toe, and stinktoe because of the unpleasant odor of the edible pulp of its seed pods. It is a very important multi-purpose tree harvested from the wild as a local source of food, medicines and various commodities. Bark, resin, and leaves are used for a variety of health conditions, including candida, diabetes, asthma, bronchitis, and prostatitis. Stinking Toe Fruit can be made into a decoction or tea, or taken as a supplement. Some users find that it has a mild stimulant effect and thus avoid consuming it at night. It is exploited commercially for its timber and gum; is sometimes cultivated and encouraged to grow semi-wild as a food crop and has also been planted as an ornamental in parks all over the tropical world. It has limited ornamental use as a shade tree in parks and on streets because the heavy seed pods emit an offensive odor as they mature and can cause damage or injury when they fall. It is a hardwood that is used for furniture, flooring, and decoration. Its hard fruit pods have edible dry pulp surrounding the seeds. Its sap, called animé, is used for incense, perfume, and varnish.

Stinking Toe Fruit is a medium to large sized, noble, spreading, evergreen tree with massive spreading branches and a heavy, umbrella-shaped crown. It grows slowly, but can reach an eventual height of 30 meters, with some specimens up to 45 meters. The plant is found growing in a wide range of habitats including tropical dry forest, transition to pre-montane moist forest, and tropical wet forest as well as subtropical moist forest. The plant grows on all textures of soil from sand to clay but develops best on deep, fertile, moist and well-drained sandy soils. It tolerates poor fertility soils and waterlogging soil. Plant’s straight, cylindrical bole can be un-branched for 12 – 24 meters and is usually 60 – 120 cm in diameter, though specimens up to 150 cm have been recorded. Bark is smooth, becoming 2.5 cm or more thick, grey to pinkish-brown.

Fertile flower are followed by indehiscent (that do not open when ripe) woody legumes with oval section, 4-16 cm long, 2-6 cm broad, and 2-3 cm thick and slightly kidney-shaped. They are initially green when young turning to reddish brown as they are mature. An odor is released when the shell of the pod is broken; the smell is described as “off-putting” and the recommendation are generally to avoid the aroma. The fruits consists of  1-5 slightly compresses ellipsoid seeds, 2-3 cm long and 1,8-2,5 cm broad, of glossy brown red color. Each seed is individually covered with the flesh. The texture is very dense and dry and the flavor is sweet, like powdered sugar. Each of the seeds is the same general shape as the outer-shell, just much smaller and should be discarded. Pods weigh about 10-50 g and the pulp accounts for less than 20% of this weight. If consumed raw it tends to stick inside the mouth like dry dust. It is one of the richest vegetable foods known because of its high concentrations of starches and proteins. It is further an excellent concentrated feed for animals. 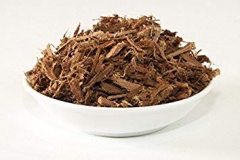 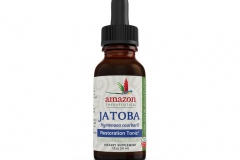 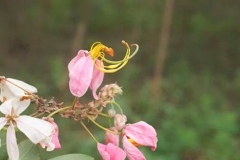 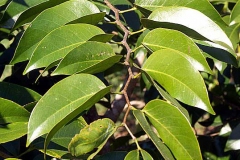 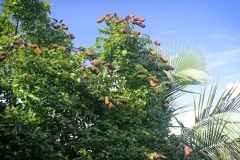 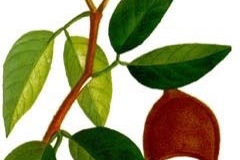 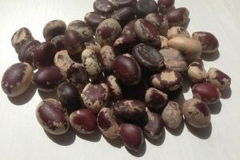 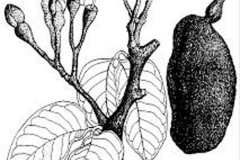 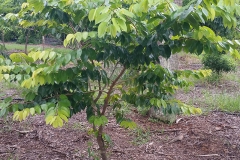 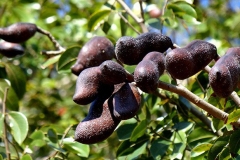 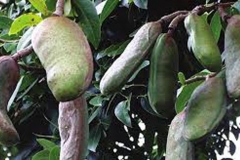 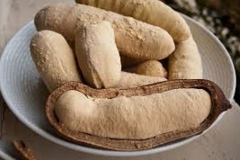 Smell of stinking toe may hurt the nose of some; it can help the eyes of everyone to stay in a great shape. That’s because this exotic fruit is a good source of vitamin A. So if you want to keep at bay eye diseases that could eventually take away your 20/20 vision, it’s a wonderful idea for you to try having stinking toe.

Another nutrient that is found abundantly in stinking toe is iron. The mineral is required by the body for the production of red blood cells. RBCs for short, they permit the bloodstream to transport oxygen. Having less than optimal RBC count can lead to anemia, which can be due to a deficiency in iron.

Stinking toe is commonly given to individuals who have no appetite and are at risk of becoming malnourished. This fruit is also known to possess energy-boosting properties. It’s exactly for this reason why athletes and bodybuilders often add stinking toe to their smoothies for maximum performance and gains.

4. Slows Down the Aging Process

Just like most other exotic fruits out there, stinking toe is a phenomenal source of antioxidants. Because of the ability of antioxidants to neutralize free radicals that damage healthy cells of the body, they are known to slow down the process of aging, which can register externally as well as internally. Antioxidants also help manage oxidative stress and inflammation, both of which are linked to health problems like osteoarthritis, cancer and heart disease.

Stinking Toe is a very rich source of carbohydrates. They are thus very effective in supplying the body with a good and healthy amount of energy. Of the simple sugars that it contains, Fructose, a very important sugar is the most common.

Stinking Toe Fruit’s strong antifungal nature makes it quite effective for dealing with topical fungal infections such as athlete’s foot and nail fungus. It can be applied topically as well as taken internally for these conditions.

It can also be taken internally for urinary tract infections (including bladder infections) and both internally and as a douche for yeast infections.

Stinking Toe Fruit has anti-inflammatory properties which reduce it beneficial for dealing with inflammation of the respiratory tract, as in asthma and bronchitis. It has been found to be an inhibitor of the enzyme 5-lipoxygenase, which is involved in prostaglandin production. Prostaglandins are inflammatory agents, and one of them (leukotriene B4) is responsible for inflammation in air passages.

Regular consumption of Stinking Toe Fruit, help to stimulate the elimination of fluids, thus, you will promote cleanness in the urinary and renal tracts.

Stinking Toe Fruit has properties that are effective in fighting infections. In addition, these same properties can prevent foot mycoses and candidiasis.

Stinking Toe Fruit consists of anti-bacterial properties that are essential in the fight against meningitis, besides helping in the expulsion of bacteria that cause autoimmune diseases.

As we mentioned in the topic above, it has properties that help eliminate fluid retention effectively. You can also make tea from Stinking Toe Fruit leaf to treat this condition.

Stinking Toe Fruit consists of anti-inflammatory, anti-fungal and antibacterial properties, it also acts in the construction of a healthy immune system, making it even more prepared to combat various types of problems that may cause health damage.

We all know that asthma is caused by clogging of the airways, which can cause difficulty in breathing. However, Stinking Toe Fruit possesses the properties that are essential to combat this condition.

Seed pods consist of an edible powdery pulp. It has its own peculiar smell and sweet flavor, slightly reminiscent of bananas, and is generally considered pleasant but not very attractive. The texture is that of dry flour turning to a paste in the mouth, and some people find this unpleasant. It is very dry and largely starchy, so it is a good source of calories. Stinking Toe Fruit bark tea is a quite popular drink for lumberjacks working in the forests in Brazil, because it is a natural energy tonic.

Pods and leaves are not eaten. Seeds and pulp are removed from the pod, ground and readily consumed by livestock.

Hard, durable, tough wood is one of the best from the region. Heartwood is salmon pink to orange-brown when fresh, becoming russet to reddish-brown when seasoned; often marked with dark streaks. Sapwood is usually wide, white, grey, or pinkish. Texture is medium to rather coarse; grain mostly interlocked; golden luster, without distinctive odor or taste. Wood is moderately difficult to saw and machine, largely because of its high density, but except in planning it can be machined to a smooth surface. It is easy to glue and finish satisfactorily. Wood is very resistant to brown-rot and white-rot fungi. Heartwood is also rated very resistant to dry-wood termites; it has little resistance to marine borers. This important timber tree is used for furniture (sometimes compared with mahogany), carpentry, general construction, wheels and cogs, dugouts, shipbuilding, posts, looms, cartwheels and rail ties. The wood is also attractive for cabinetwork, musical instruments, interior trim, plywood, turnery, and veneer.

Roots and trunk yield a pale yellow or red resin like gum known commercially as South American copal. Gum exudes and forms hard lumps that become buried in the soil at the base of a tree. Sometimes as much as a barrel of gum has been found around the roots of a large tree or at the site of a former tree. Gum is used mainly in varnish but also for incense and local medicines. The copal is also used for patent leather and in stains for tin ware. About 35 tons/year are collected in Brazil for local use.

Thick bark is a good source of tannin.

It is a suitable species when planted as a shade tree and has occasionally been used for coffee shade.

It is used to some extent as an ornamental in parks and gardens.