Trending
You are at:Home»Herbs and Spices»Stone Breaker: Herb for Kidney Stones 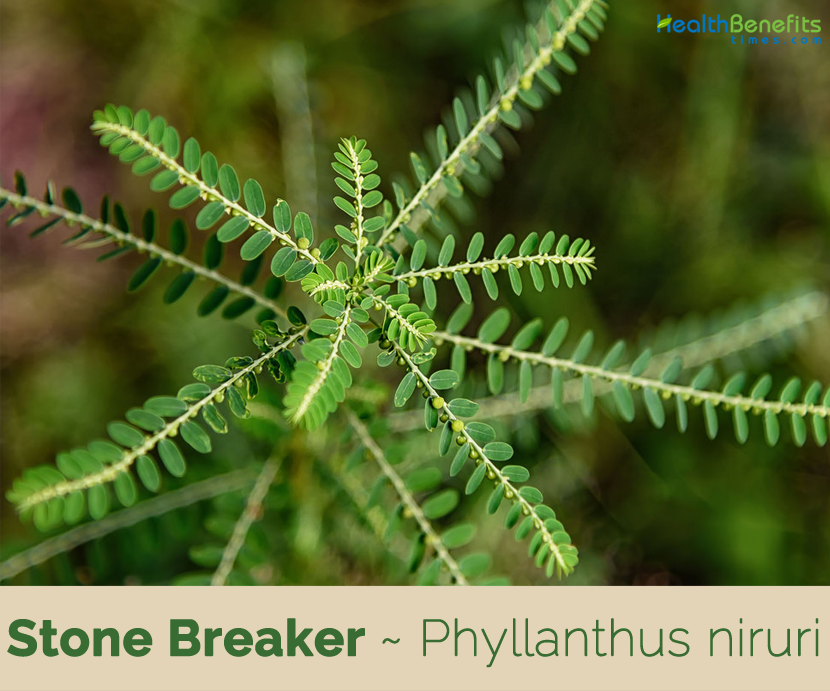 Stone Breaker scientifically known as Phyllanthus niruri with many common names including Stonebreaker, Phyllanthus Plant, Child Pick-a-back, Gulf Leafflower, Black Catnip, Meniran, Chanca Piedra, Shatterstone, Quebra Pedra, Gale Of Wind, Carry Me Seed, Creole Senna and Daun Marisan is a widespread tropical plant commonly found in coastal areas of China, India and South/Central  America. It is a relative of the spurges, belonging to the Phyllanthus genus of Family Phyllanthaceae. It has been a traditional mainstay in Ayurvedic medicine for more than two millennia, where it is used for ailments ranging from hiccups to leprosy. It is also a noticeable herb in the Unani system of medicine, which applies it to wounds and sores and uses it for symptoms like jaundice. It gets its common name, stone breaker as well as the Spanish and Portuguese equivalents from its use in treating kidney stones.

Stone breaker is an erect, slender, branched, annual herb that grows about 12 – 24 inches (30 – 60 cm) in height. The plant is found growing in degraded moist deciduous, forest plantations, plains, dry fields, roadsides, wastelands, forest margin and scrubby woods. The plant consists of taproot that is slender, wiry and is provided with fine secondary roots. The plant has cylindrical and hairless stem, on that continues, at the level of the leaves insertion, triangular stipules, acuminates and often cordated in the base. It exudes translucent latex when it is cut.

Leaves are simple, alternate, hairless and sub-sessiles, pale green above, with pinnated venation little visible. At the base of the petiole 2 stipulate threadlike reduced, of unequal length and fast blacks. The lamina is elliptic to elongated, long from 8 to 12mm and wide from 3 to 5mm, with round or blunt summit, sometimes briefly apiculated, the base rounded and in entire margin. Two faces are hairless.

Fruit is a capsule dehiscent in 3 cells with 2 seeds each. The capsule is globose, depressed, and smooth, 2mm in diameter, that appears to the face lower of twigs. Seeds are wedge-shaped, one concave and two flat sides, beige, 1mm in height.

Although considered a problematic weed for farmers it is a valuable medicinal for herbalists (Oudhia and Tripathi 2002) and holds a reputed position in both Ayurvedic and Unani systems of medicine. Recently it has attracted the attention of researchers, because of its hepato-protective properties. No effective specific therapy is available for viral epatitis but Stone Breaker has shown clinical efficacy in viral Hepatitis B. Its root, leaves, fruits, milky juice, and whole plants are used as medicine.

According to Unani system of medicine herb is stomachic and good for sores and useful in chronic dysentery. Fruits useful for tubercular ulcers, wounds, sores, scabies and ring worm. The fresh root is believed to be an excellent remedy for jaundice. A poultice of the leaves with salt cures scabby affection and without salt applied on bruise and wounds. The milky juice is a good application to offensive sores. The infusion of the root and leaves is a good tonic and diuretic when taken cold in repeated doses. In many parts of India, it is commonly used for the treatment of snake bite. The plant is used as a fish poison. In many parts of India especially in deserts, the roots mixed with Commiphora mukul are given to camels to cure indigestion. The decoction of leaves and stem are used for dyeing cotton black.

According to research conducted by International Brazilian Journal of Urology suggest the preventive effect of Stone Breaker herb in stone formation or elimination. The plant Stone Breaker (Phyllanthus niruri) contains  potential agent to prevent and/or to treat Urolithiasis. The review is based on data from the literature and on the results obtained by our group from either in vivo/in vitro experiments or clinical studies. Stone Breaker has been shown to interfere with many stages of stone formation, reducing crystals aggregation, modifying their structure and composition as well as altering the interaction of the crystals with tubular cells leading to reduced subsequent endocytosis.  Other beneficial effects of Stone Breaker may be related to ureteral relaxation, helping to eliminate calculi or to clear fragments following lithotripsy, or also to a putative reduction of the excretion of urinary crystallization promoters such as calcium. No side effects of  renal, cardiovascular, neurological or toxic effects have been detected during these studies. (1)

Stone Breaker (Chanca piedra) is also known for its traditional use against parasites, bacterial, viral and fungal infection. This Stone Breaker use was also supported by a few medical publications. Research found this herb is  beneficial in treating chickenpox, vaginal yeast infections and pulmonary tuberculosis.

Another study that tested Stone Breaker antibacterial activity, found it to be effective against H. pylori (Helicobacter pylori) bacteria, without affecting beneficial lactic acid bacteria. The significance of this finding is that unlike antibiotics that kill both good and bad bacteria, this herb was able to selectively fight H. pylori without killing the good bacteria.

Stone Breaker (Phyllanthus niruri) displays evidence of anti-diabetic activity. Research conducted by Dr. Charles Okoli and his associates, used lab rats for test. Diabetic rats were treated with aerial extracts of Stone Breaker and as a result the rats’ blood glucose levels decreased, as well as their glucose absorption and storage. While it’s not know for sure if Stone Breaker caused these results, these findings suggest the lowered blood glucose levels were caused by the aerial extracts of Store Breaker. As a result, Stone Breaker is known to be anti-diabetic.

Phyllanthus niruri (Stone Breaker) and other phyllanthus species help prevent the metastasis of some lung and breast cancers. Research showed that the polyphenols in this herb help prevent the invasion, migration, and adhesion of cancer cells.

Water extracts of Stone Breaker are selectively toxic to some types of harmful organisms, without affecting beneficial organisms. The Universidad de la República researched 28 plant and algae species for activity against harmful organisms. Researchers noted that the most interesting activity was observed in Stone Breaker. This observation and conclusion was duplicated by researchers at the University of Malaysia.

Phyllanthus niruri help treat acute hepatitis B infections due to its anti-viral and liver-protecting abilities.

In a 2010 study, 60 people with the condition received either a placebo or a product made of seven herbal medicines including 100 milligrams of Stone Breaker (phyllanthus niruri). The herbal medicine group experienced faster recovery than the placebo group. However, they reported side effects like upper abdominal pain and diarrhea. Stone Breaker herb may not help chronic hepatitis B, though.

Traditional Chinese medicine has always mentioned Stone Breaker (Xiao Fan Hun) as an herb that supports liver health. The Department of Chemistry at Bose Institute in India conducted an animal research that investigated the liver protecting action of Stone Breaker against acetaminophen toxicity. Results showed that a protein in Stone Breaker protects liver tissues against oxidative stress, probably by increasing antioxidant defenses. Study results from the Patel Institute of Pharmaceutical Education and Research suggest compounds in Stone Breaker may be a valuable component to a multi-herb, liver-support formulation.

How to Consume Stone breaker

Stonebreaker is used chiefly for its medicinal properties, and it is not consumed as a food.

You can easily brew your own Stone Breaker tea at home if you can get your hands on the ingredients!

Note: You should drink 1 cup 2-3 times each day to remedy an acute problem with kidney stones.