Trending
You are at:Home»Herbs and Spices»Health benefits of Summer Lilac 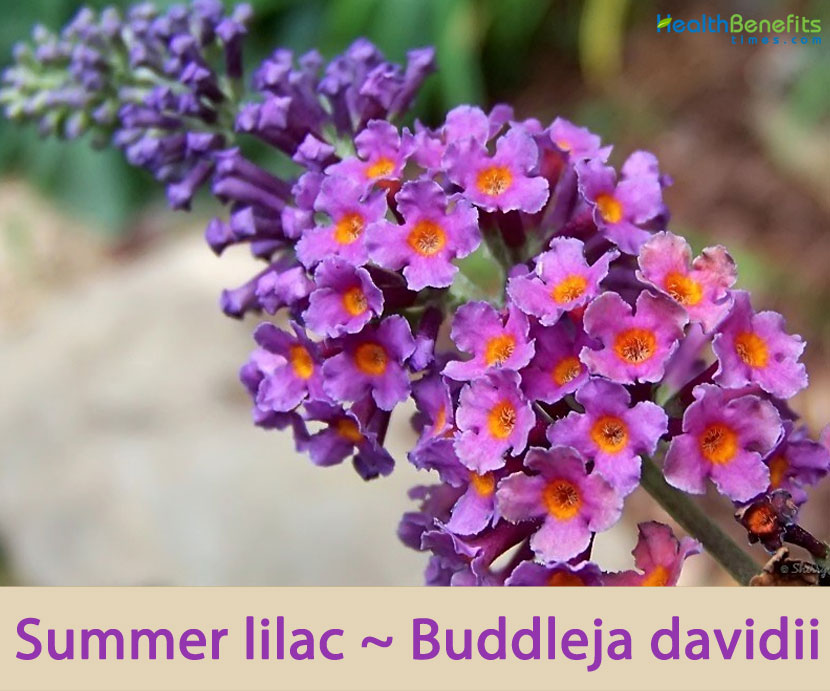 Buddleja davidii (spelling variant Buddleia davidii), also called summer lilac, butterfly-bush, or orange eye, is a species of flowering plant in the Buddlejaceae (Butterfly-bush family). The plant is native to eastern Asia (i.e. western and central China) and has been introduced as an ornamental world-wide, first to Europe (1890s) and then later to the Americas, Australia, New Zealand, and some parts of Africa because of its fragrant and colorful flowers. It is widely used as an ornamental plant, and many named varieties are in cultivation. The full potential of this species has yet to be realized; however, it is already considered problematic (i.e. out-competing native, agricultural, and forestry species) in northwestern and northeastern USA and Canada, throughout New Zealand, and in central Europe.  Some of the popular common names of the plant are buddleia, buddleja, butterfly bush, butterfly-bush, orange eye, orange eye butterflybush, orange-eye butterfly-bush, orange-eye butterflybush, purple buddleia and summer lilac. Since it was first named, there have been several spellings of the genus Buddleja such as Buddleia, Buddlea, Buddleaea, Budlea, Buddleya and Budleia.

Genus name honors the Reverend Adam Buddle (1660-1715), English botanist and vicar of Farmbridge in Essex. The genus name is frequently listed today as Buddleia. However, Linnaeus named the genus Buddleja which is still considered to be the proper spelling (first name survives) according to the International Code of Botanical Nomenclature. Specific epithet honors Pere Armand David (1826-1900), French missionary and naturalist, who found this species growing in China in 1869/1870 along the border of China and Tibet. It was found near Ichang by Dr Augustine Henry about 1887 and sent to St Petersburg. Another botanist-missionary in China, Jean-André Soulié, sent seed to the French nursery Vilmorin, and B. davidii entered commerce in the 1890s.

The plant prefers a rich loamy well-drained soil. It is very tolerant of alkaline soils, atmospheric pollution and maritime exposure. It grows best on dry soils of low fertility, where it can seed itself freely. Moderately stout angled twigs are initially green and tomentose, later turning to light brown and glabrous with large white pith and small buds. Branches and trunk are covered with a pale brown bark. This bark is smooth on a young shrub, but becomes deeply fissured as the plant ages. The branches are quadrangular in section, the younger shoots covered in a dense indumentum.

The arching stems are densely covered with whitish or greyish hairs and are bluntly four-angled when young. They become almost hairless (i.e. glabrescent) and rounded as they mature.

The oppositely arranged leaves are elongated (i.e. narrowly-ovate) to somewhat egg-shaped in outline (i.e. oblong-ovate) and are borne on short stalks (i.e. petioles) 1-5 mm long. These leaves are 4-20 cm long and 1-8 cm wide and have toothed (i.e. crenate to crenulate) margins and pointed tips (i.e. acute or acuminate apices). The upper surface of the leaves is dark green and mostly hairless (i.e. glabrous), while the lower surface is covered in velvety whitish hairs (i.e. tomentose) and is greyish-green in color.

Small tubular flowers are 8-14 mm long and about 5 mm across and are borne in un-branched or branched elongated clusters (i.e. racemes or thyrsoid cymes) 12-30 cm long and 2-5 cm wide, that are formed at or near the tips of the branches. Each flower has four mauve or purple (occasionally white to dark purple) petals that are fused together into a tube (i.e. corolla tube) for most of their length (i.e. tube 6-11 mm long). The four spreading petal lobes (i.e. corolla lobes) are 1.5-3 mm long and the mouth of the tube is usually orange-yellow in color. The flowers also have four small green sepals that are 2-3.5 mm long and are also fused together (i.e. into a calyx tube) for half of their length. Each flower also has four stamens and an ovary topped with a style (0.5-1.5 mm long) and a club-shaped (i.e. clavate) stigma. These sweetly scented flowers are either stalk less (i.e. sessile) or shortly stalked (i.e. sub-sessile). Flowering occurs mostly during spring and summer (i.e. from November to February).

Fertile flowers are followed by elongated (i.e. narrowly-ellipsoid or narrowly-ovoid) capsule with two compartments containing numerous seeds. These capsules are 5-10 mm long and 1.5-2 mm wide and turn from green to brownish in color as they mature. Fruit are present from later summer to early winter (i.e. from February to June). Seeds are brown, thread-like, and long-winged at both ends. They are 2-4 mm long and about 0.5 mm wide and are oval in shape (i.e. ellipsoid) with wings at both ends with the center slightly thickened. Approximately 500-100 seeds are arranged tightly packed with their long sides aligned with the axis of the capsule. 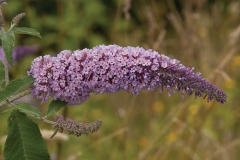 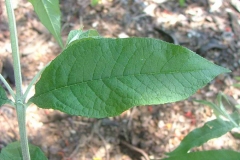 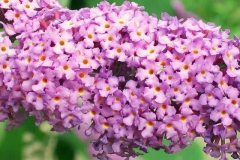 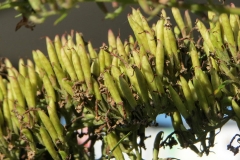 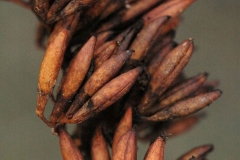 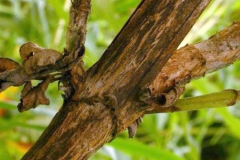 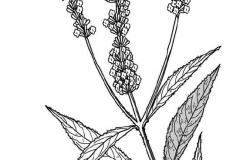 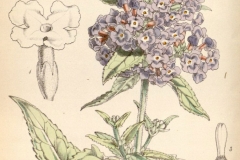 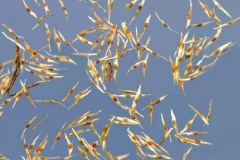 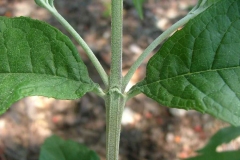 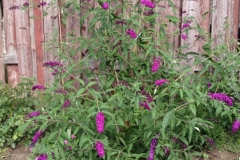 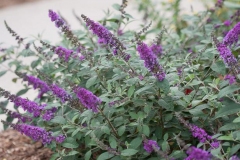 Here’s a quick look at a few of the uses and benefits of this plant. Summer lilac consists of antioxidants that can help prevent premature aging. It also has amino acids and moisturizing properties that can help hydrate, soothe, calm, and protect the skin against harmful UVA rays. Listed below are some of the popular health benefits of summer lilac

Summer lilac is loaded with antioxidants that help fight back against skin aging and inflammation. It also helps stimulate your skin’s self-repair functions, improving the overall texture and appearance of your skin.

3. Protects from the sun

Summer lilac has been clinically proven to help protect against damage from UVA rays. This wavelength of UV light from the sun is associated with accelerated skin aging, so products with Summer lilac extract can help you avoid skin damage and stay safe in the sun.

Physical removal on a small spatial scale may help in the early stages of invasion. Young shrubs can be dug up, but this method is not recommended for mature plants. Remaining stumps should be treated with glyphosate herbicide.

In New Zealand, Summer lilac is controlled by aerial sowing of cover grasses such as Holcus lanatus in the autumn, prior to planting, which has been found to effectively suppress the growth of young Summer lilac seedlings.

Dead-heading is the recommended method to reduce the spread of Summer lilac by seeds, but this practice has been linked to reducing the quality of the shrub in subsequent years and increasing the plant’s susceptibility to disease.

In 2006, Cleopus japonicus was introduced and released as a potential bio-control agent for Summer lilac in New Zealand. Further releases were made in 2007 and 2008 following careful monitoring of weevil behavior and establishment. As of 2009, it was still considered too early to judge the field effectiveness of C. japonicus. A second species under consideration for biological control of Summer lilac in New Zealand is the stem weevil, Mecysolobuserro. The adults feed on the tender terminal shoots causing tips to wither and die. Host-range testing of this species is still underway (Kay, 2002).

Glyphosate herbicide without surfactans has been reported to be effective against small shrubs, whereas large shrubs with heavy pubescent leaves were less vulnerable to foliar application. Direct and precise application, such as painting cut stumps is more effective than spraying. Treatment with triclopyr or imazapyr has not been effective. In New Zealand, Summer lilac is typically controlled in recent clear cut stands using herbicides that are usually aerially applied immediately before (i.e. glyphosate and metsulfuron) and then again after (i.e. terbuthylazine and hexazinone) planting of plantation conifers.