Trending
You are at:Home»Herbs and Spices»Traditional uses and benefits of Sweet Gale 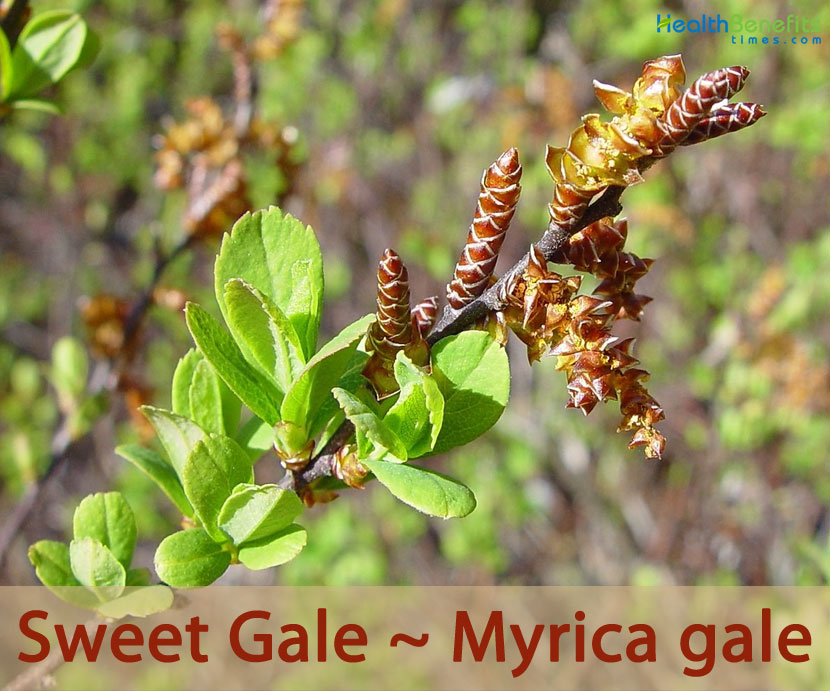 Sweet Gale scientifically known as Myrica gale is a deciduous shrub belonging to Myricaceae (Bayberry family). The plant is native throughout western and northern Europe, from Portugal, Spain, Britain, Ireland and the Netherlands to Scandinavia. It also occurs in France, Germany, and Poland and across the Baltic states of Estonia, Latvia and Lithuania into eastern Russia. It is distributed throughout much of northern North America, including Alaska, all of Canada, Washington, Oregon and from Minnesota eastwards to New England in the USA, as well as the states of Kentucky and Tennessee. It is found in northern parts of Japan, the Korean peninsula, Sakhalin Island and eastern Siberia. It is listed as endangered in North Carolina and threatened in Pennsylvania. Apart from sweet gale it is also known by several common names including bog gale, Dutch myrtle, moor myrtle, waxberry, bog myrtle, Meadow-fern, Sweet bayberry, Candle berry, Bog myrtle and sweet willow. The plant teams up with a bacterium in its roots that can fix nitrogen. Its fragrant, dark-green leaves and fruits (which attract birds) make it a good planting choice for wet areas of the garden. It is eaten by horses and goats, but not relished by sheep and cows.

Sweet gale is an aromatic, shade-intolerant, sub montane to subalpine, circumpolar deciduous single or multi-stemmed shrub that normally grows about 6 feet tall, with a spread of 6 feet. The plant is found growing in wetlands. Throughout its range, it occurs in moist, peaty soils in coastal bogs, swamps, lakeshores, ponds, streams, marshes, fens, wet heathland, and estuary edges. The plant is cultivated on moist acidic soils where few other species can be grown. It thrives best in peaty soils and cannot tolerate liming. Its multiple stems and branches often form dense patches. The plant spreads vegetatively by both branch layering and rooted suckers, often creating large island of plants. Stems are spreading, finely hairy when young, glabrous at maturity and loosely branched. Lower stems are up to about 1 inch diameter with grayish-brown bark. The twigs are slender and hairless, with resin dots. The plant has reddish brown bark with prominent lighter lenticels, turns grayish brown with age. The branchlets are fragrant when bruised.

Leaves are alternate, simple, oblanceolate, 3-6 cm. long and up to 2 cm. broad. Leaf blade is cuneate-obovate or narrowly elliptic-obovate, leathery, glabrous, base wedge-shaped (cuneate), apex obtuse to acute, margin entire or serrate in upper ½.  Upper surface is dark green while lower is pale green. Both surfaces are heavily dotted with minute bright yellow wax glands and are hairless or with fine hairs.

Sweet gale’s flowers are small catkins that appear just before the leaves emerge. Male and female flowers are mostly borne separately on different plants (dioecious), sometimes on the same plant (monoecious), in clusters called catkins. Male catkins are formed from the lateral buds at the tips of one-year-old twigs, with 12 to 25 flowers each with a broad, sharply pointed, yellowish to reddish-brown bract and 4 to 8 pale stamens. They are erect and cylindrical, about ¼ to ⅓ inch long; they are yellow with triangular, reddish scales.

The female flowers are slightly smaller. They also form from lateral buds at the tips of one-year-old twigs. They consist of 15 to 25 tiny flowers, each with two red stigmas supported by oval bracts. The effect is that of fluffy, bright red tufts. Throughout its range, Sweet gale flowers in spring to early summer. Flowering normally takes place in between March to May.

Fertile flowers are followed by flattened, egg-shaped nutlets that occur in thick, compact cluster 1/3 to ½ inch long. Each nutlet is about 1/8 inch long with a stubby beak. Fruits are enclosed by spongy bractlets that act as flotation devices in water. This aid in their dispersal to other wet habitats. The fruits ripen in July.