Trending
You are at:Home»Foods»Tragacanth (Gund) facts and benefits 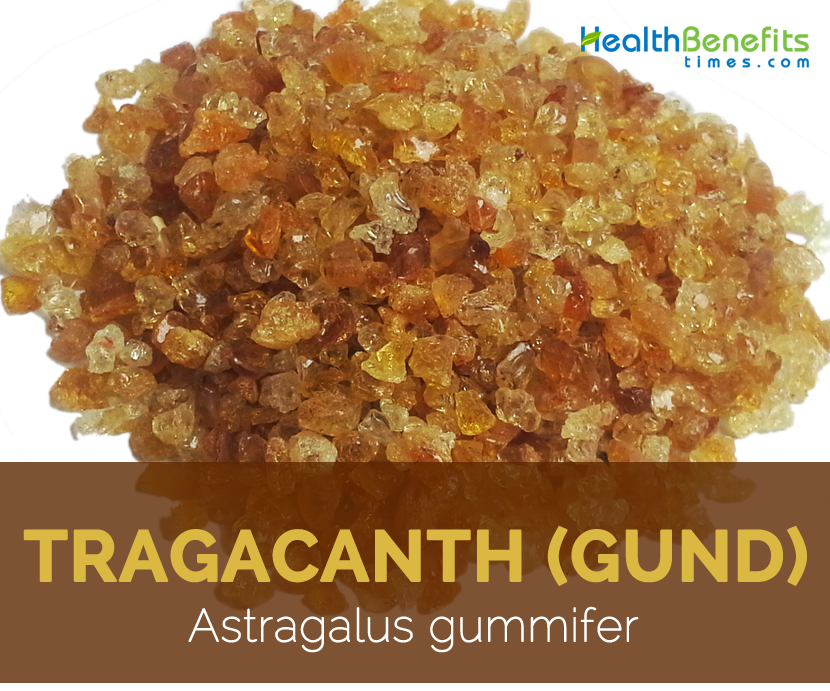 Tragacanth is low-growing, thorny shrubs that are native to the mountainous regions of the Middle East. Gum tragacanth is obtained by tapping the branches and tap roots. The gum dries as it exudes and is collected rapidly. The word tragacanth is said to derive from the Greek words tragos (meaning goat) and akantha (thorn) which may describe the appearance and texture of the crude gum. Iran is the biggest producer of this gum.

Tragacanth gum is a viscous, odorless, tasteless, water-soluble mixture of polysaccharides obtained from sap that is drained from the root of the plant and dried. The gum seeps from the plant in twisted ribbons or flakes that can be powdered. It absorbs water to become a gel, which can be stirred into a paste. The major fractions are known as tragacanthin, highly water soluble as a mucilaginous colloid, and the chemically related bassorin, which is far less soluble but swells in water to form a gel.

The gum is used in vegetable-tanned leather working as an edge slicking and burnishing compound, and is occasionally used as a stiffener in textiles. The gum has been used historically as an herbal remedy for such conditions as cough and diarrhea. As a mucilage or paste, it has been used as a topical treatment for burns. It is used in pharmaceuticals and foods as an emulsifier, thickener, stabilizer, and texturant additive (code E413). It is the traditional binder used in the making of artists’ pastels, as it does not adhere to itself the same way other gums (such as gum Arabic) do when dry. Gum tragacanth is also used to make a paste used in floral sugar craft to create lifelike flowers on wires used as decorations for cakes, which air-dries brittle and can take colorings. It enables users to get a very fine, delicate finish to their work. It has traditionally been used as an adhesive in the cigar-rolling process used to secure the cap or “flag” leaf to the finished cigar body.

Gum tragacanth was first described by Theophrastus several centuries before Christ. The name “tragacanth” comes from the appearance of the exuded gum, which tends to form ribbons similar in appearance to a goat horn (from the Greek “tragos” meaning goat and “akantha” meaning horn). The gum is obtained from small shrubs of the Astragalus genus, are small, low bushy perennial shrubs having a large tap root along with branches, and grow wildly in the dry deserts and mountainous regions of South West Asia, from Pakistan to Greece, and in particular, in Iran and Turkey. The main areas of commercial production are the arid and mountainous regions of Iran. Fifty years ago, Iran exported annually more than 4,000 t, but in the 1970s and 1980s this amount greatly decreased, due to a number of reasons. At present, the world market for gum tragacanth is estimated to be no more than 500 t/year (about 300 t). Plants develop a mass of gum in the center of the root, which swells in the summer heat. If the stem is slit, soft gum is exuded. The gum exudes readily from these cuts in the form of ‘ribbons’ or ‘flakes’ which become brittle on drying.

Although Tragacanth gum has a very wide area of applications, it can be utilized as a thickening agent as well as a binder and even stabilizer and in industries like paper making, cosmetics, textile industry and so on but if there is something in it for which it is famous. Listed below are some of the health benefits of Tragacanth

Tragacanth gum has amazing cooling properties and thus it is often used to prepare a drink which helps to cool the body in the summer season. It works as a cooling agent and decreases the temperature of the body. This is turn helps in stopping a heat stroke. Tragacanth gum is very useful in controlling nose bleeding that often occurs in children in the extreme summer season.

Tragacanth gum is an extremely useful remedy for treating urinary incontinence. It also helps in calming the urinary muscles in case of inflammation of the urinary tract and blockage of urine.

4. Beneficial for skin and beauty

Tragacanth gum is very beneficial for your skin and enhancing your beauty. Tragacanth gum contains anti-aging properties. It helps to delay wrinkles and fine lines.

Tragacanth gum possesses purgative properties and so it is very helpful in treating constipation. It works as a laxative and provides a lot of relief.

Women become really weak after delivery. Tragacanth gum is helpful in gaining the strength of the body and helps the new mother to cope with the challenges of motherhood. It also helps to control heavy blood flow during periods. Tragacanth gum is very helpful during pregnancy. The practice of eating Tragacanth ladoos is very common in India. They are very beneficial for the mother and her baby.

The appropriate dose of tragacanth depends on several factors such as the user’s age, health, and several other conditions. At this time there is not enough scientific information to determine an appropriate range of doses for tragacanth. Keep in mind that natural products are not always necessarily safe and dosages can be important. Be sure to follow relevant directions on product labels and consult your pharmacist or physician or other healthcare professional before using.

Traditional uses and benefits of Tragacanth

Tragacanth gum is a viscous, odorless, tasteless, water-soluble mixture of polysaccharides obtained from sap which is drained from the root of the plant and dried. The name ‘Tragacanth gum’ is procured from two words Tragos and Akantha. Elucidation of these two words is “goat” and “thorn”, respectively in Greek. The gum exudate varies in quality from long, thin white ribbon to a coarse, yellow-tan ribbon.  Powder made from ribbon is white to light yellow in color, odorless, and has an insipid, mucilaginous taste. The flakes vary from yellow tan to brown to give yellowish white to tan powders. Both ribbon and flake gums are available in a variety of particle sizes and viscosities depending on the end uses.