Trending
You are at:Home»Oils»Watermelon Seed Oil facts and benefits 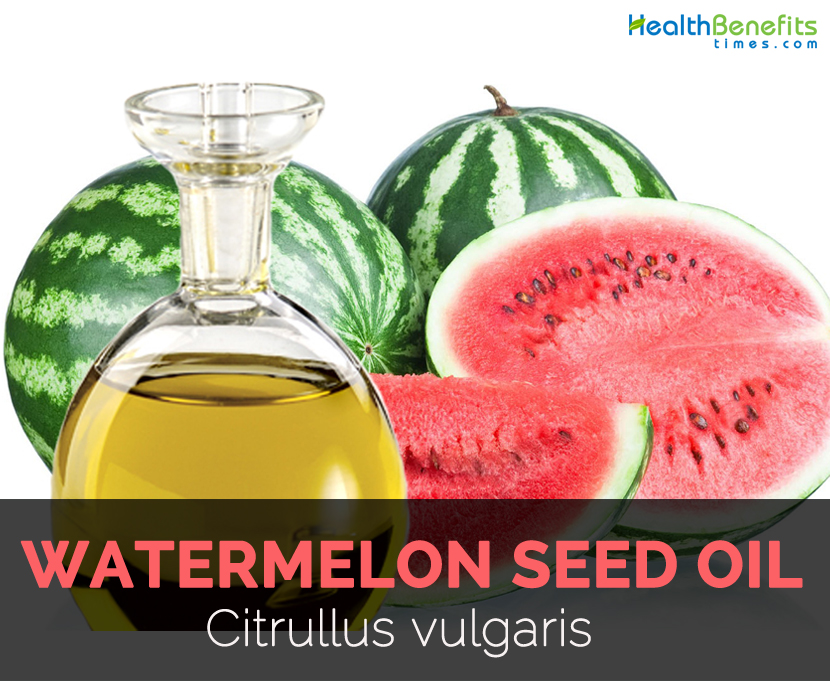 Watermelon seed is also known as Ootanga oil or Kalahari oil which is used for dressing salads and desserts. The seeds are eliminated from the flesh and then it is sundried in hot sun. The seeds are roasted so that it removes fatty acid rich kernel. The seeds are cold pressed once the kernel is eliminated. The yellow oil oozes out with mild, viscosity and nutty flavor. This oil has thin consistency and is non greasy. Watermelons were originated before five thousand years ago in Kalahari Desert of Africa and are still being cultivated. It reached through Egypt to North at the time of Roman era and was prized after being cultivated. A watermelon seed contains the major chemical constituents such as oleic acid, linoleic acid, riboflavin, thiamin, vitamin B6, folic acid, Vitamin B12, iron, calcium, potassium, magnesium, sodium, phosphorus, copper and zinc. It contains stearic acid, oleic acid and palmitic acid which are fatty acids that is beneficial for the health. It is absorbed by the skin quickly.

It is originated in South Africa. Watermelon was cultivated in Egypt which dates back and then started in Mediterranean areas. The seeds were placed to the tomb of kings in Egypt with a belief that it will feed their body after life. Watermelon is native to South Africa and is known since past 5000 years. The evidence shows that the cultivation of watermelon was found near Nile valley in 2nd millennium BC.The seeds of Watermelon was found on tomb of Pharoah Tutankhamun. In 10th century, China started the cultivation of Watermelons. In 16th century, it was introduced to Native Americans.

Besides the flesh of watermelon, the seeds have got various health benefits. Let us discuss on the health benefits that have been derived from Watermelon seeds:

It is useful for oily skin by lowering the sebum production. It makes the skin less oily. It is helpful for the skin problems like acne that is caused due to excessive oil production. It prevents the hair follicles from being clogged and the condition such as folliculitis. It helps to treat skin conditions such as psoriasis and eczema. It could be applied to the skin directly.

It is added as an ingredient in hair care products. It lowers oiliness on hair and scalp. It lowers hair being frizzy and provides it nutrition. It could be used as hot oil treatment for shiny and smooth hair.

Watermelon seed oil acts as an antioxidant to the skin cells. It counteracts with oxidizing agents and free radicals which are the major cause for speeding up aging process and also induce UV radiation damage. Massage with this oil to the skin. It enhances the skin to prevent free radical damage.

This oil assists the body to eliminate toxins. Massage with warm oil to remove the environmental toxins and dirt from the skin. It acts as a great detoxifier and skin cleanser.

Massage with watermelon seed oil to the middle back region and lower abdomen. This increases the urine output and tones the urinary system. It is helpful for the people with scanty and infrequent urination. This also prevents kidney stones.

Watermelon seed oil has adequate amount of Vitamin E. If ingested, it promotes the immune function and acts as an antioxidant activity. It prevents undergoing oxidation of polyunsaturated fatty acids. It prevents the lipids and nervous system.

Watermelon seed oil has hepatoprotective properties this helps to lower AST and ALT level in blood. It is used as an aid to reduce liver damage that is promoted by toxic substances.

It is used for salad dressings and desserts.

Watermelon seeds have high content of nutrients.  The seeds are dried in sun after removing it from rind and then pressed for extraction of oil. Watermelon seeds are great source of minerals and vitamins. It also provides great source of manganese, magnesium, zinc, phosphorus, copper and iron. Vitamin B is essential for immune health, healthy blood flow and good metabolism. The minerals and magnesium is essential for enhancing immunity and maintain strong bones. It is also essential for normalizing the level of blood glucose and regulate blood pressure.