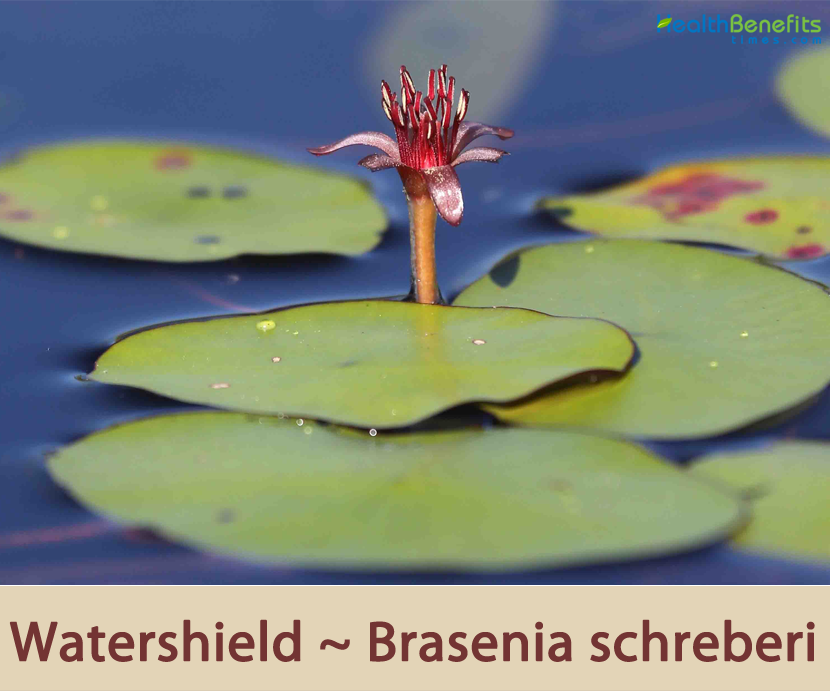 Brasenia schreberi, commonly known as watershield, is a genus belonging to the Cabombaceae Rich. ex A. Rich. (Water-shield family), consisting of one species, Brasenia schreberi. The plant is widely distributed in North America, the West Indies, northern South America (Venezuela, Guyana), eastern Asia (China, Japan, Korea, Primorye), Australia, the Indian Subcontinent, and parts of Africa. Some of the popular common names of the plants are Dollar bonnet, Watershield, Water target, Schreber’s Watershield and Purple Wendock. The young leaf tips, which are coated with thick transparent mucilage, are eaten in salad with vinegar, sake and soy sauce, or added to soups as a thickener. The plant is considered a delicacy in Japan where it is often bottled and sold in local markets.

Water shield is an herbaceous perennial, aquatic, native plant with long, slender, branching stems. Stems are several, branched above, reddish-brown, covered with a gelatinous sheath, 5-40 cm long. The plant is found growing in oligotrophic or mesotrophic ponds, shallow water of lakes, sluggish streams, rivers and beaver ponds, particularly those with somewhat acidic water, sloughs and swamps. It is found north of Lake Pontchartrain, most commonly in waterways rich in tannins. Water-shield prefers rather shallow water up to six feet deep.

It resembles water lilies (Nymphaeaceae) because both are found submerged or floating on the water’s surface. It has creeping, thin rhizomes rooted in the mud at the bottom of ponds, floating leaves, and grows in a wide range of water depths (1 inch to 6 feet). It does best on the water edge in 8 to 10 inches of water, but with the roots planted in the mud of more shallow waters.

Watershield is easily recognized by its leaves. They are oval shaped, peltate (the leaf stem attaches to the leaf in the middle of the blade, like a mushroom stalk), with the undersides covered with thick, jelly-like slime. Leaf blades are small, ¾ to 2½ inches wide and 1 to 4½ inches long. The top of the leaves are green, while the undersides and leaf stems are reddish purple. All underwater parts of this plant are covered with slime. Leaves float flat on water surface. This thick coat apparently protects plants from drying out during drought and may also deter mammals from eating it.

The flowers of watershield are small and inconspicuous, typical of wind-pollinated plants. Flowers have three to four sepals about ¾ inches long that are green underneath and reddish purple to maroon on top. There are usually four petals that are slightly longer and thinner than the sepals. They are reddish purple to maroon in color. Flowers usually have 18-36 stamens and 4-18 pistils in each flower. Flowering normally takes place in between May and September.

Although watershield flowers are not showy, they have an interesting biology. Flower buds develop underwater and are covered with slime. Flowers bloom over a two-day period. On the first day the bud emerges above the water. Sepals and petals open and bend downward. Although stamens and pistils are present in each flower, on the first day of blooming, only the pistils emerge. Stalks of the pistils lengthen and spread outward over the petals. At night, the flower stalk bends and the flowers submerge beneath the water. On the second day, flowers emerge from the water again, but with the pistils retracted. The stamen stalks are lengthened and the anthers open. In this way flowers are cross-pollinated (Osborn and Schneider). After blooming, the sepals and petals fold up and submerge. 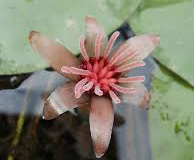 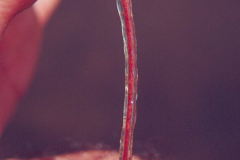 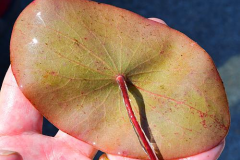 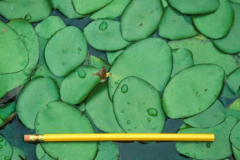 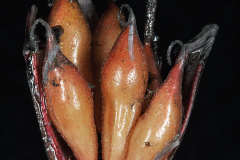 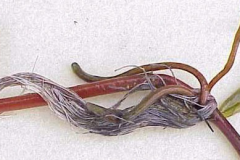 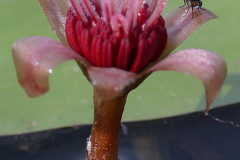 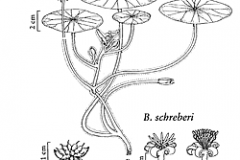 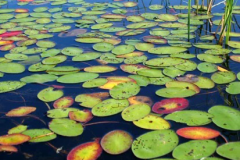 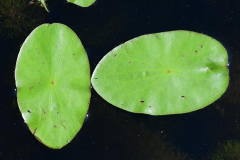 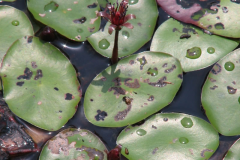 Fertile flowers are followed by leathery, 6-10 mm long club-shaped to peanut-shaped achene with one or two seeds each. Seeds are 2.5-4.0 mm long, oblong to oblong-ovate in outline, the surface finely pebbled, and grayish brown to yellowish brown. The fruit is indehiscent (does not split open to release the seed).

Traditional uses and benefits of Watershield

Water shield reproduces by Insects or wind cross-pollinating the flowers. Once the flowers are pollinated they fold up and submerge. Fruits develop underwater enclosed in the petals and sepals. Each fruit carries one or two seeds each. This plant can quickly take over shallow ponds and lakes if not managed. Early intervention to regain control of infested areas will help avoid large invasions.

Beneficial bacterial products and enzymes such as PZ900 feed on nutrients in the water making them unavailable for plant growth. Reducing nutrients can help prevent invasion.

In order to restore the function of waterways or swimming areas mechanical removal is a good option. However, in large established infestation, mature floating mats can be thick, heavy and difficult to clear away. Water shield plants will regrow from seeds and leftover roots, long term monitoring and follow-up will be required to avoid future reinvasion. Physical removal in conjunction with chemical control will maximize success.

When used carefully according to the label instruction, aquatic herbicides can be safe and effective management tools. The products that have been successful in treating water shield individually or in combination are Clipper, Shore-Klear, Sonar AS and Sonar RTU. A nonionic surfactant Cygnet Plus should be mixed in solution with herbicides when plants are treated.

Clipper is a broad spectrum, fast acting contact algaecide/herbicide. It comes in a water dispersible granule that mixes with water to be sprayed or pour. Clipper should be applied to actively growing plants or algal blooms.

Shore-Klear is a systemic herbicide that will translocate down into the root systems killing the plant.

Sonar A.S. is long acting systemic herbicide ideal for water bodies with minimal flow. Simply mix Sonar A.S. with water and spray throughout the surface of the water or pour in different spots around the pond. Sonar A.S. does not have water use restrictions.

Sonar RTU is a long acting, systemic, easy to use herbicide. Sonar RTU does not require mixing, simply open the bottle and treat from the shoreline.

Cygnet Plus is a nonionic wetting agent, sticker, activator and penetrant all in one. Cygnet Plus increases the effectiveness of herbicides uptake into the plant tissue.