Trending
You are at:Home»Herbs and Spices»Health Benefits of Wheat Grass 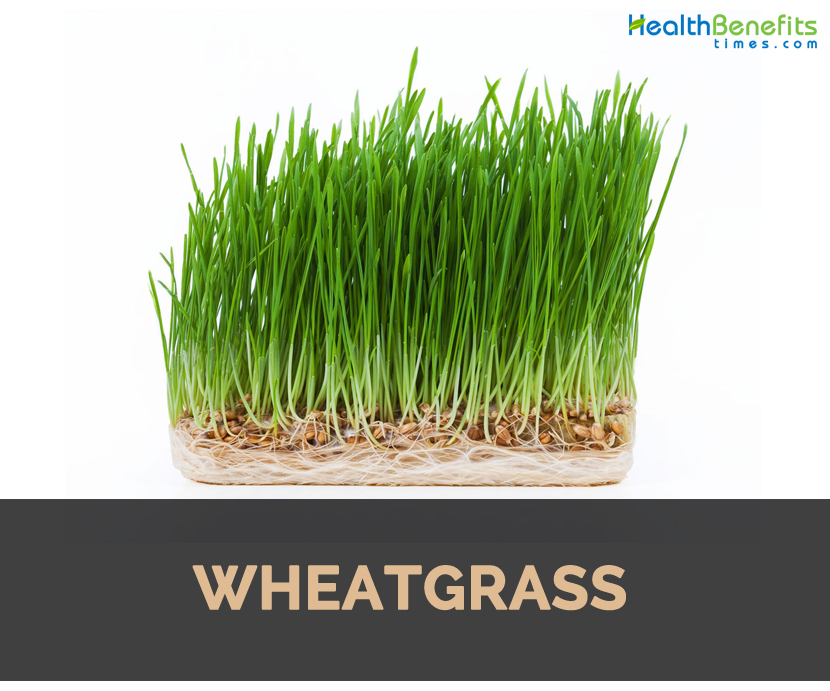 Wheatgrass with scientific name as Triticum aesticum belongs to family Poaceae. Agopyron cristatum, Bambusa textilis, Poa annua, Cynodon dactylon, Zea mays, Aristida purpurea, etc. also belongs to this family. It refers to the young grass which is freshly dried and dried into powder for consumption. Wheatgrass are hollow, pithy, simple and glabrous about 1.2 m tall which possess leaves usually flat, narrow about 20-38 cm long and 1.3 cm broad. Spikes are slender, long, flattened and dorsally compressed. It is loaded with nutrients such as 18.5 mg chlorophyll, 860 mg protein, 38 mg lysine, 15 mg calcium, 7.5 mg vitamin C and micronutrients such as amino acids and B complex vitamins.

The plant is believed to possess nutritional values such as antioxidant, anti-inflammatory, immunomodulatory, anticarcinogenic, astringent, laxative, anti-aging, antibacterial and diuretic properties. It has phytochemical constituents such as carbohydrates, alkaloids, gum, mucilages and saponins.

It is harvested before the stems develop and immediately dehydrated at body temperature in order to preserve natural pure living biological properties and potency of superfood which includes all heat sensitive enzymes as well as nutrients.

Traditionally wheatgrass is worshipped by Hindu people. However, the intake of wheatgrass began in 1930s in the Western world after the experiments being conducted by Charles Schnabel to popularize the plant. In 1940, Schnabel’s powdered grass cans were on sale throughout the United States and Canada.

Ann Wigmore was in favor for intake of wheatgrass as a part of raw food diet as it is able to cleanse bodily toxins by maintaining balance of nutrients as a whole food.

Wheatgrass is the genus of wheatlike grasses in Poaceae family found throughout North Temperate Zone. The species such as crested wheatgrass (A. cristatum) and desert wheatgrass (Agropyron desertorum) are forage plants which are used as soil binders in western United States. Typically wheatgrass plants are perennials that range from 30 to 100 cm (about 12 to 40 inches) high. It has creeping rhizomes or underground stems that spread vegetatively. Leaves are flat or rolled somewhat and flowers form in spiklelike inflorescences. The species are drought tolerant and could survive in saline soils. As the genus has undergone meaningful taxonomic revision, various former species are placed in grass genera which includes western wheatgrass (Pascopyrum smithii, formerly A. smithii), bluebunch wheatgrass (Pseudoroegneria spicata, formerly Agropyron spicatum) and slender wheatgrass (Elymus trachycaulus, formerly A. trachycaulum).

Wheatgrass has ample amounts of vitamins C, A and E that acts as anti-oxidant and prevents ageing of cells in the body which are responsible for brain and heart problems. Its components assist in managing menopause. It is beneficial for arthritis, graying or hair loss, skin allergies, kidney stones, weakness, pyorrhea, weak eyesight, dental infections and fatigue. It is also effective in heart disease, infection of digestive system, acute stomach ache, gas, asthma, paralysis, constipation, leucoderma, diabetes, leukemia and other cancer types. It improves fertility and enhances youthfulness due to high content of magnesium in chlorophyll that builds enzymes which restores sex hormones. Wheatgrass juice cleanses the body from pollutants. The high levels of enzymes or amino acids acts as a natural cleanser for detoxifying liver, discard toxic heavy metals from blood stream, eliminate waste matter and slow aging process. The richness of amino acids, fiber, protein, minerals, vitamins and enzymes assist in strengthening immunity. It improves resistance to diseases and wipes body toxins.

Wheatgrass has vital alkalizing benefits for the body with increasing nutrient absorption such as vitamin C, electrolytes and Vitamin E. Wheatgrass has chlorophyll that helps to balance the pH level of the body and protects cells. The chlorophyll containing compounds to high carbohydrate meals helps to suppress hunger motivation and promotes signals of satiety. It adds chlorophyll rich substances to meals that lowers food intake and prevent compensational eating in the day that helps to lower body weight over time.

Wheatgrass possess antioxidant properties that help to lower free radical damage or oxidation that causes aging and leads to formation of disease. Study shows that wheatgrass inhibits lipid perioxidation in liver and protects mitochondria within cells. It lowers inflammation levels and reduces the chances of diseases such as liver disease, cancer and heart disease.

Study shows that wheatgrass has anticancer activities. It is beneficial for overall immune function such as regulating immunological activity and combat oxidative stress which contributes to cell mutations. Trials shows that wheatgrass helps to lower chemotherapy related side effects such as malabsorption, fatigue and deficiencies. Wheatgrass treats immune related conditions such as rheumatoid arthritis, ulcerative colitis, obesity, hematological disease and diabetes. Antioxidant benefits are due to the presence of antioxidant enzymes such as superoxide dismutase and cytochrome oxidase. It converts free radicals such as reactive oxygen species to hydrogen peroxide as well as oxygen molecules.

Wheatgrass helps to lower stomach pain and manages minor gastrointestinal ailments such as diarrhea. Wheatgrass is gluten free and is a great option for people with gluten intolerance. It treats ulcerative colitis. Wheatgrass lowers pain and other symptoms of people.

Side effects of Wheatgrass

Some people might experience headache after intake of wheatgrass juice. It might be the sign that the body is intolerable to the juice. It provides relief from symptoms. Wheatgrass is contaminated by organism known as Listeria monocytogenes. It causes serious side effects such as severe headache.

The study shows that wheatgrass provoke the symptoms of nausea in six patients. Wheatgrass possess gluten and people who are intolerant to gluten experiences nausea.

Wheatgrass causes allergies when used in form of juice or pills. It causes symptoms in various body parts within few moments of wheatgrass intake. It is due to overproduction of some chemicals which combat suspected allergen. This allergy affects circulatory and digestive systems and causes cramping, nausea, diarrhea and vomiting. Other allergic reactions such as congestion and shortness of breath are also experienced.

Wheatgrass can cause stain in the teeth. So brush teeth after the intake of wheatgrass juice.

Some individuals might experience constipation with wheatgrass juice. Consult the doctor immediately.

As wheatgrass is a sprouted grass which grows in moist conditions that could lead to the development of mold. Both white and brown types of mold refer spoilage which means grasses should be thrown away. The juice made with moldy wheatgrass tastes bitter and musty.

When consumed the undiluted form in excessive amounts, it causes fatigue and dizziness. So add small shot of juice to other vegetable juices.

The skin might be inflamed after the intake of wheatgrass juice such as rashes.