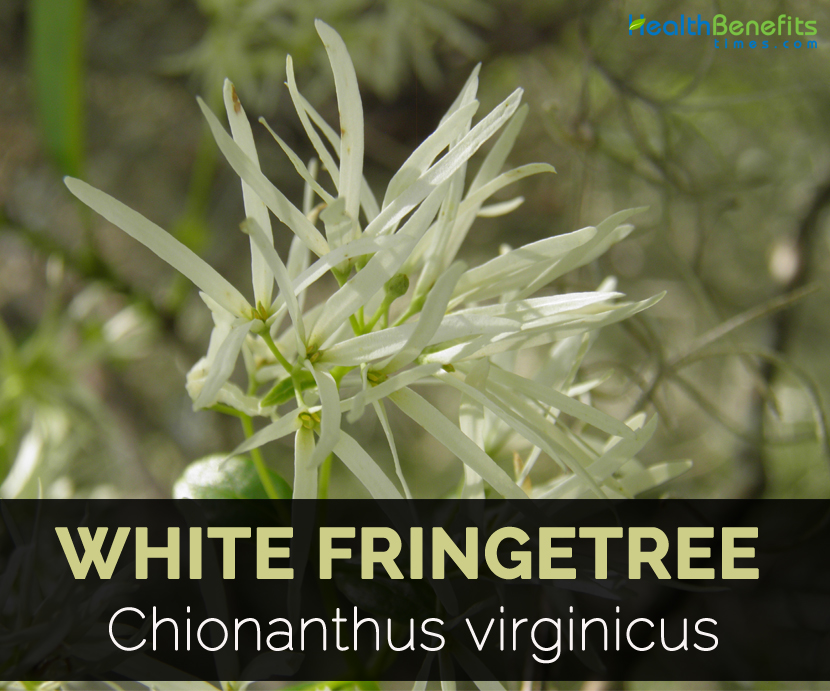 The species is native in the eastern United States, from Pennsylvania to the Gulf of Mexico. A shrub or small tree of the Oleaceae, or olive, family. The plants are 10–30 ft. high, possess oval, smooth, entire leaves, and bear snow-white flowers which hang down like a fringe, hence the common name and synonyms. Fruit fleshy, purple, ovoid drupe. They form an attractive feature in garden shrubbery, growing well on river banks and on elevated places, presenting clusters of snow-white flowers in May and June. Root about ⅛ in. thick, dull brown with irregular concave scales on outer surface, inside smooth, yellowish brown. The inner layer shows projecting bundles of stone cells. Very bitter taste.

White fringetree is a deciduous shrub or small tree which grows 10-20 feet tall x 10-20 feet wide. Bark is scaly and brown tinged with red. Shoots are light green and downy at first turning to light brown or orange. Buds are acute, ovate, light brown and 3 millimeters long. Leaves are simple, opposite, ovate or oblong, 7.5 to 20 centimetres (3.0 to 7.9 in) long and 2.5 to 10 centimetres (0.98 to 3.94 in) broad. Flowers are richly scented, pure white and deeply four lobed corolla, 1.5 to 2.5 centimeters long and 3 millimeters broad. It is produced in drooping axillary panicles 10 to 25 centimetres (3.9 to 9.8 in) long which contains single seed. Usually it is dioecious though occasional plants bear flowers of both sexes. Fruits are ovoid dark blue to purple drupe and about 1.5 to 2 centimeters long that contains a single seed that matures in late summer to mid fall. 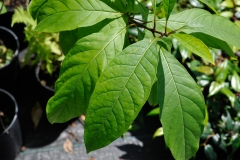 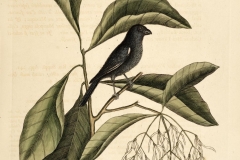 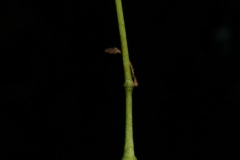 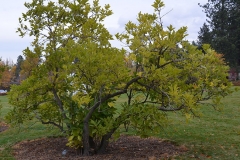 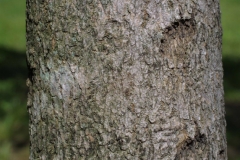 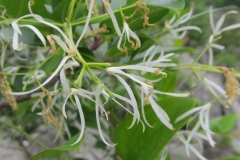 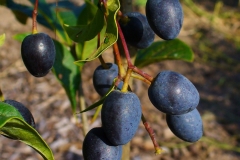 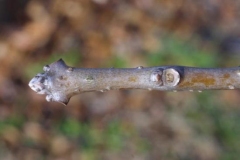 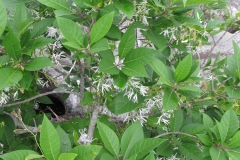 Leaves are simple, thick, opposite which grows 3 to 8 inches long and half as wide. They are narrow-elliptic to oblong or obovate-oblong having medium to dark green and waxy appearance. Leaves form very late in spring and turn dull yellow in fall before dropping.

Blossoms are fragrant which blooms late spring. They form in drooping clusters at the ends of branches in May to June. Flower has four long and narrow petals. Flowers are wispy, pure white and cloudlike. Flowers are pollinated by insects. Trees are dioecious with male and female flowers on separate plants. Male plants are impressive in bloom due to longer petals but female plants bear blue and plum like fruits which attracts wildlife.

Female plants forms a cluster of ½ to 2/3 inch long, fleshy, dark blue and plum like drupes in August to September. The fleshy drupe contains a single large seed.

Bark is pale gray or brown and smooth on young branches. Mature trunks and branches are furrowed, ridged and develops an attractive craggy like with age.

Generally useful in stomach and liver disorders and in poor digestive functions, by slightly influencing all the organs engaged in digestion and blood making. A specific in spleen malfunction, and for congestion of the liver when failure to excrete the residue from food, thus resulting in constipation (one of the reasons for gall-stone, jaundice and stomach inefficiency). In some, the involuntary muscles of the heart will also be impaired by the inactivity of the above mentioned.

In pregnancy, when indications of yellow skin, the white of the eyes are of a yellow colour, bilious colic, heartburn, etc., 5–10 drops in water before meals is indicated. Useful in malignant tumours of the stomach or bowels, and in uterine tumours, also in most chronic conditions of the liver and spleen.

10–20 drops in water before meals and at bedtime has proven effective.

In bilious colic it is best to first evacuate the stomach by giving an emetic dose of Lobelia and then to administer the above. The powdered root bark is used professionally; however, the cut root bark can be infused in hot water for ½ hr. and taken in small amounts throughout the day. Pulsatilla (Anemone) is also used in conjunction with Fringe tree.

The skin will respond to the application of an infusion of 1 oz. to 1 pint of water, when other attempts have failed. Also as an injection.

Tincture of the bark (which is the part employed and which contains saponin)—Constipation, Debility, Emaciation with liver disorder, Gall-stone colic, Headache, Jaundice, Liver (disease of, hypertrophy of), Malaria, Neurasthenia, Nursing women (complaints of).