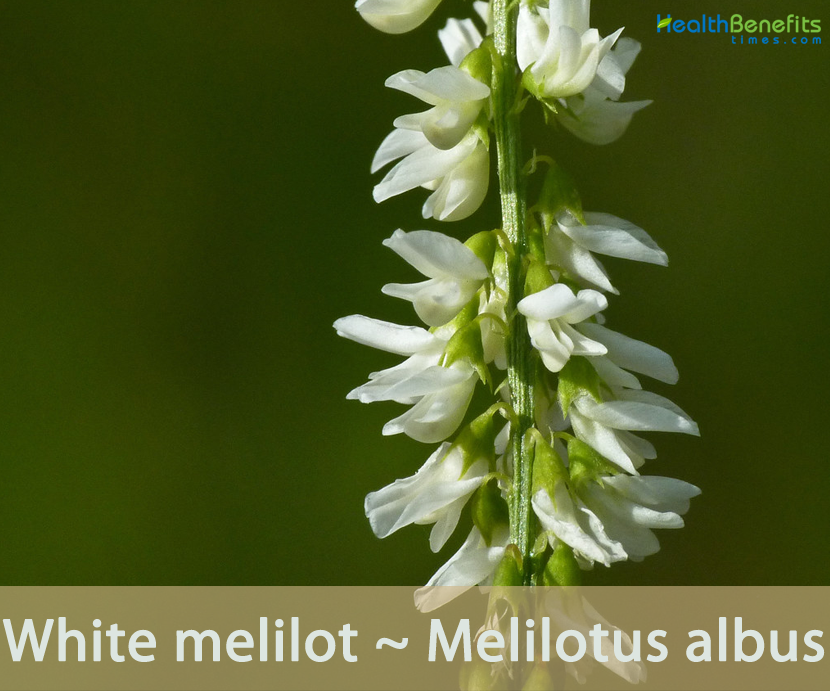 Melilotus albus is considered a valuable honey plant and source of nectar and is often grown for forage. Its characteristic sweet odor, intensified by drying, is derived from coumarin. It is used to treat unspecified medicinal disorders, as animal food, a poison, a medicine and invertebrate food, has environmental uses and for food. The plant is harvested from the wild for local use as a food, medicine and source of materials. It is cultivated as a green manure crop and soil improver and is sometimes grown as an ornamental and medicinal plant. It has typical weedy attributes such as prolific seed production, persistence and presence along roadsides and railways, and as a result can negatively impact ecosystem services, wildlife habitats, and agriculture. Although the plant can be a problematic invasive species it is also important in many places as a fodder crop, a bee plant for honey production, soil stabilizer and a useful species for land reclamation. Apart from that it is listed as an exotic pest in Tennessee, ecologically invasive in Wisconsin, and a weed in Kentucky and Quebec.

White melilot is an annual or biennial, nitrogen-fixing herbaceous plant that normally grows about 2.5 m (8 ft. 2 in) in height. It is monocarpic which means that it dies after it flowers and sets seed. The first year, the plant grows a primary stem up to 1.5 m tall, and puts down a deep taproot. In ideal conditions it may flower and set seed in its first year. If the flowering is done in the second year, the plant will over-winter just under the soil surface and the stem will appear in spring. Roots don’t grow as much in the second year; most of the growth is done by the stem and energy is used to flower and set seed. White Sweet Clover is able to self-pollinate, meaning that a single plant can produce a new population.

White Sweet Clover or White melilot forms a taproot which can grow up to 1.5 m deep in the soil. Adventitious roots form on its stem and extend outwards 30-40 cm. Roots contract to pull the plant crown down slightly under the soil in the fall to help it survive winter and grow again in its second year.

The stem of White Sweet Clover is smooth and hairless, erect, ascending and branched, grooved or channeled. The stems are usually up to 1.5 m in height. The root crown produces somewhere between 1 to 10 stems.

The leaves of White Sweet Clover have 3 leaflets, and are alternate along the stem. Leaflets of lower leaves are broadly ovate, obovate or rhomboidal, rounded or truncate at the tip, irregularly dentate, 7–35 mm long and 2–15 mm wide. Upper leaflets are narrowly oblong to lanceolate, usually rounded or truncate at the tip, dentate to almost entire. Each leaflet is fully toothed.

White sweet clover flowers are very fragrant, with a vanilla-like scent. Flowers are arranged in spike clusters at the top of the plant. Individual flowers are white, roughly ¼ inches (0.6 cm) across. Flower spikes are around 8 inches tall and the flower stalks each have between 20 and 65 flowers. Each flower has 5 petals and a light green calyx with 5 teeth. The flower is tubular and becomes broader toward the outer edges of the petals. The flowers are similar in shape to pea flowers (both plants are legumes), but much smaller. Flowering normally takes place in between July to August.

Fertile flowers are followed by ovoid seedpods that are black to dark grey, smooth or slightly reticulated and about 0.3 inches long (3-4mm). Each pod usually contains one, but sometimes two seeds. The seeds are 2.5 mm long and 1.5 mm broad, yellow and oval to kidney shaped and each plant can produce up to 350,000 seeds. Average weight for 1000 seeds is 2.3 g. Seeds often remain on the plant over the winter and fall as it dries out. 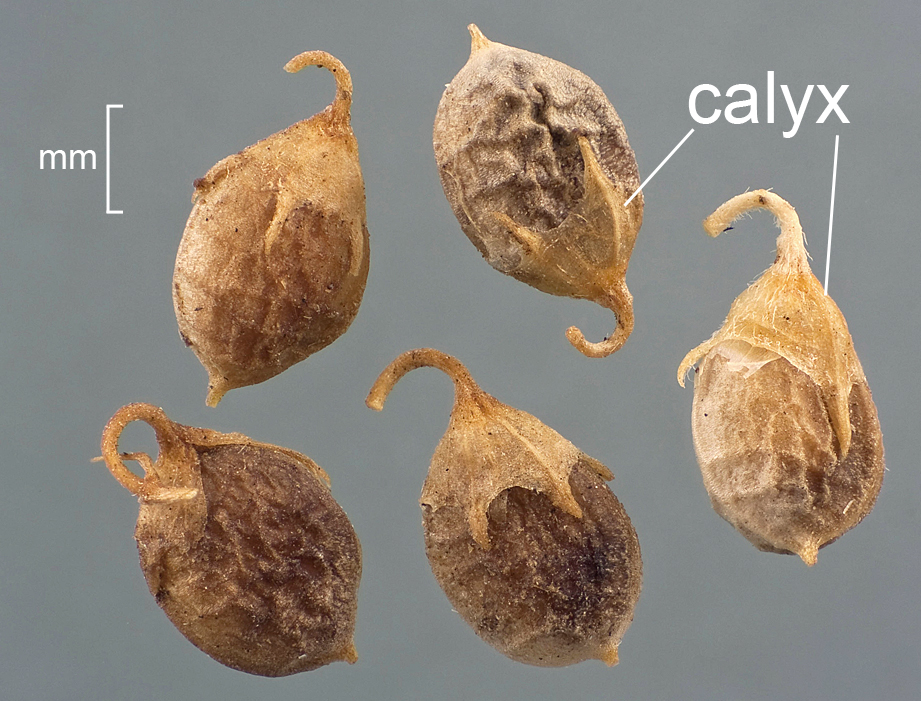 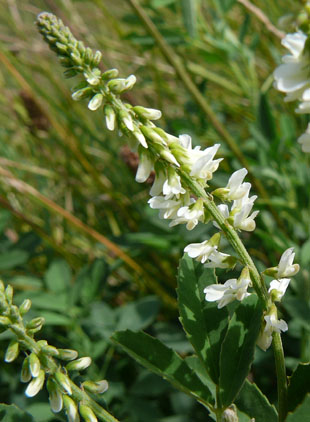 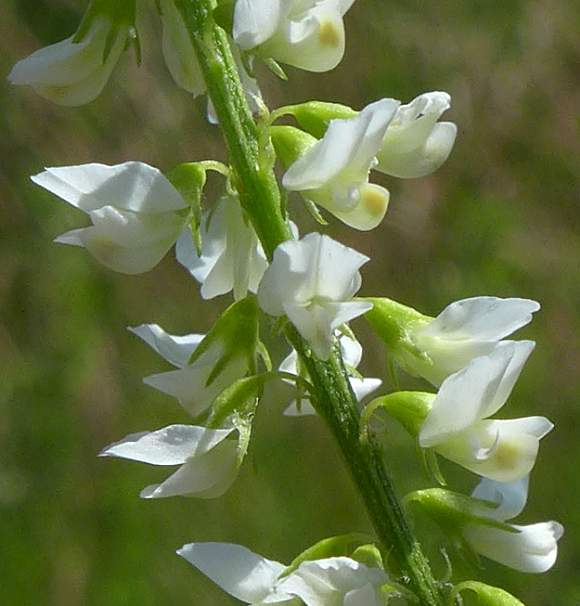 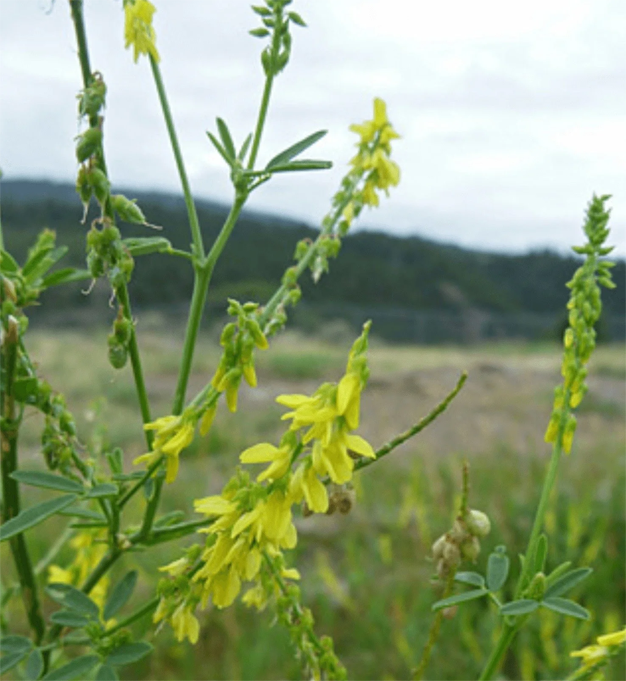 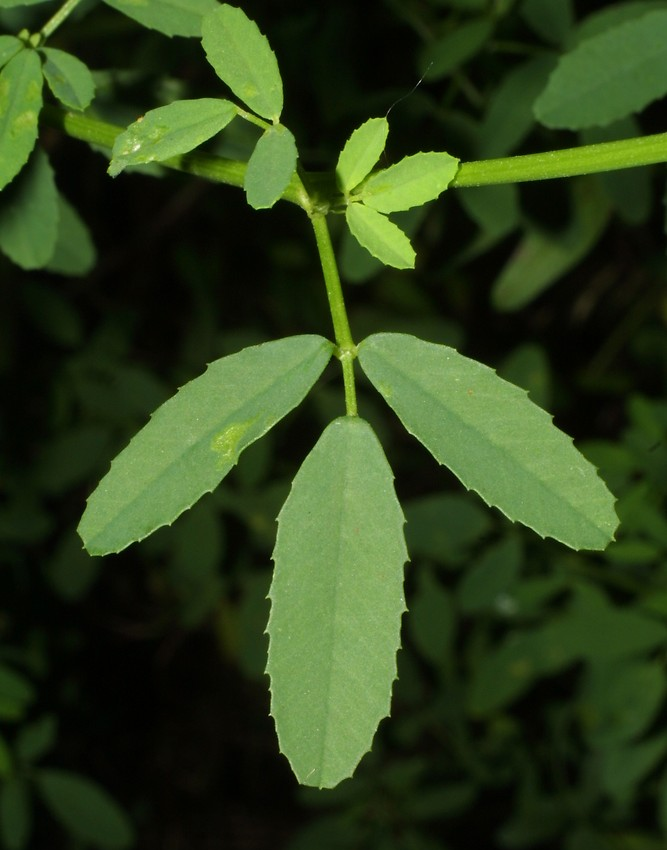 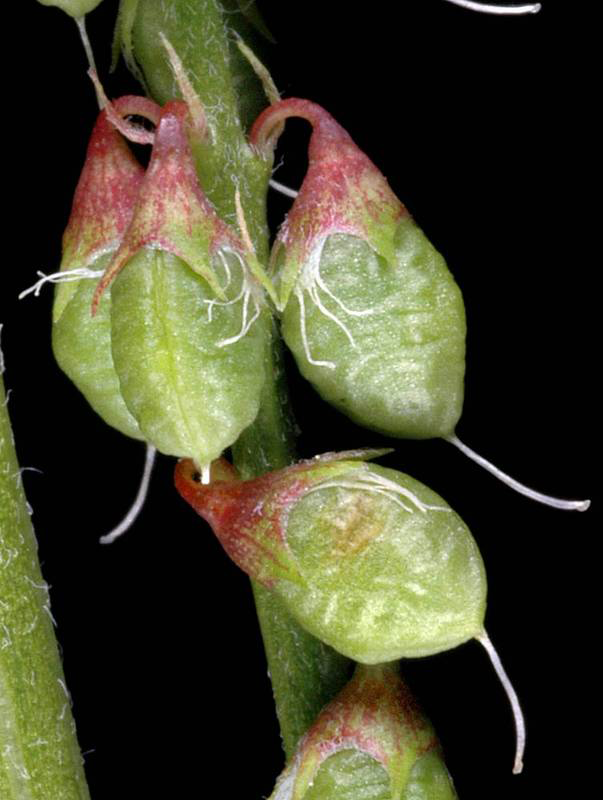 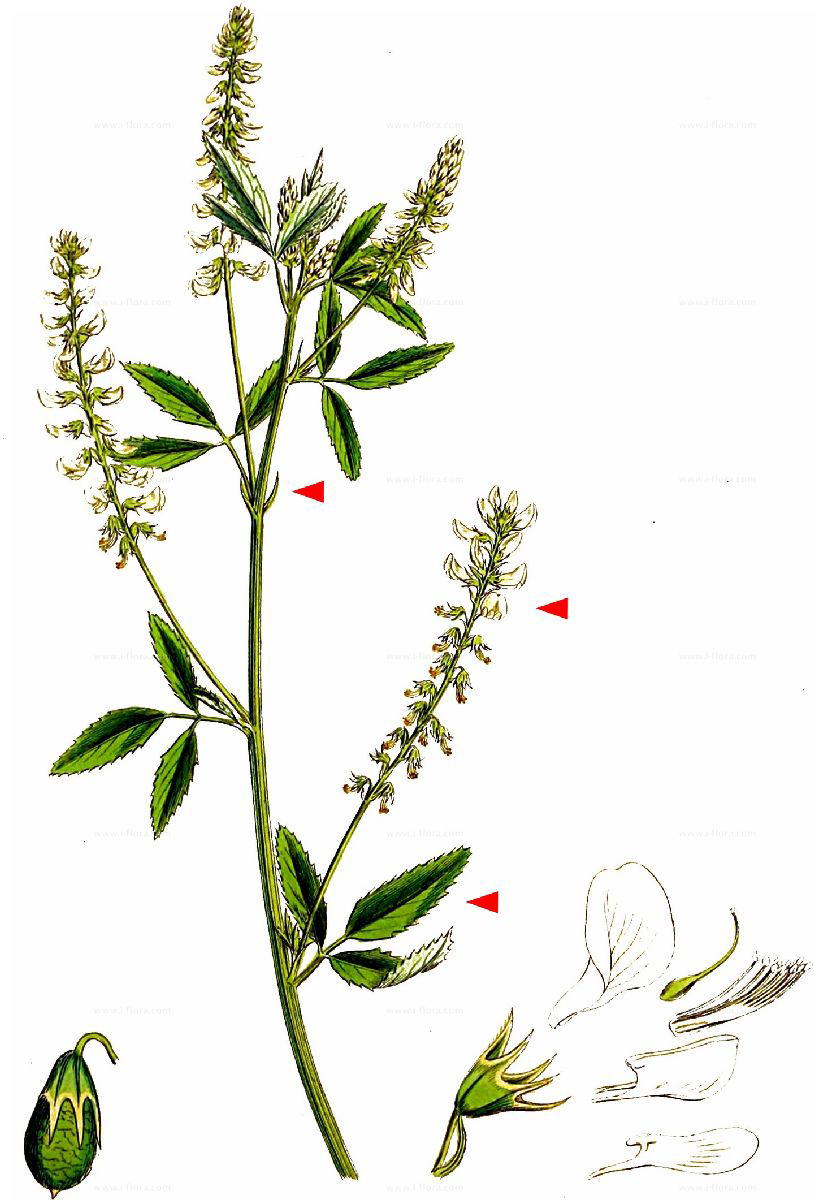 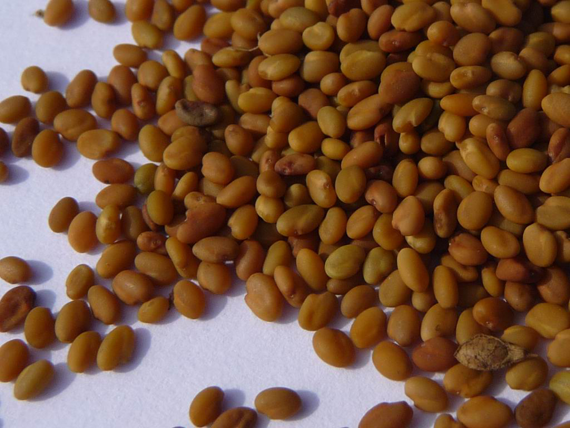 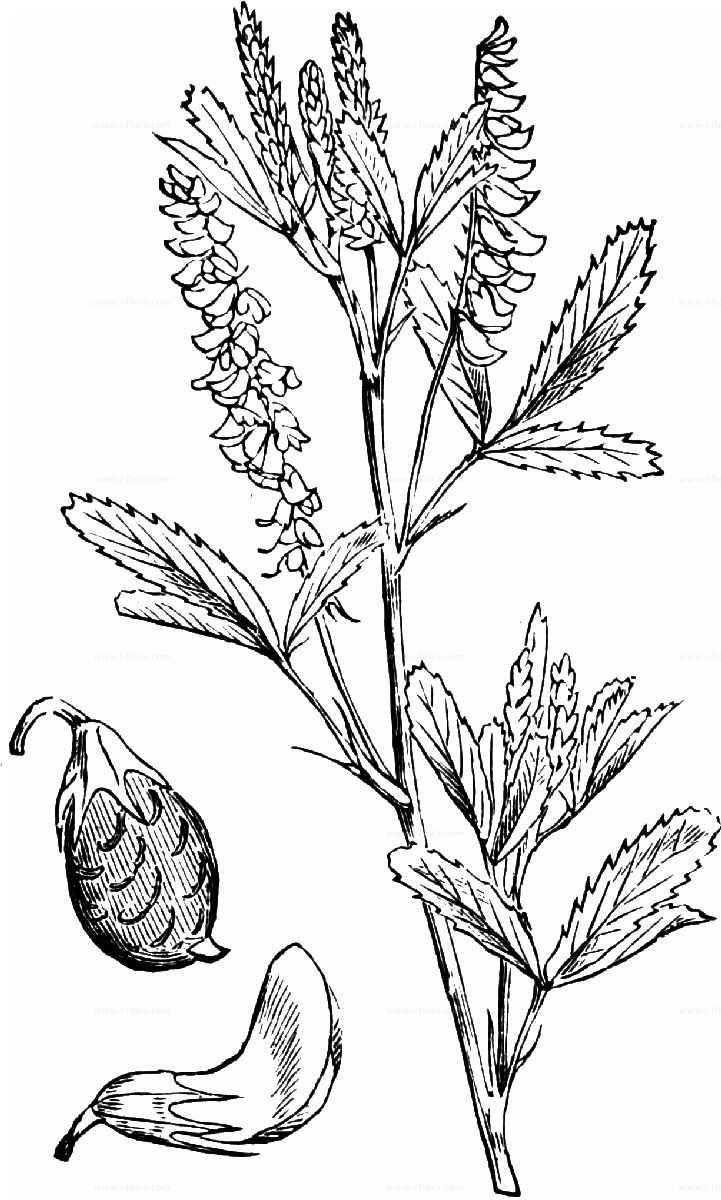 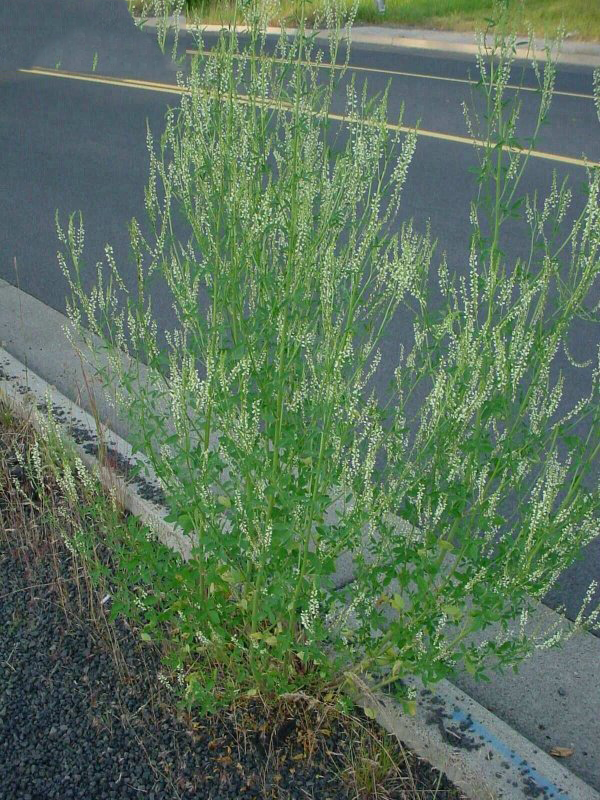 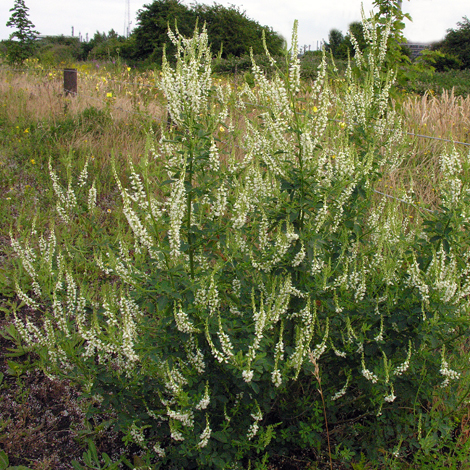 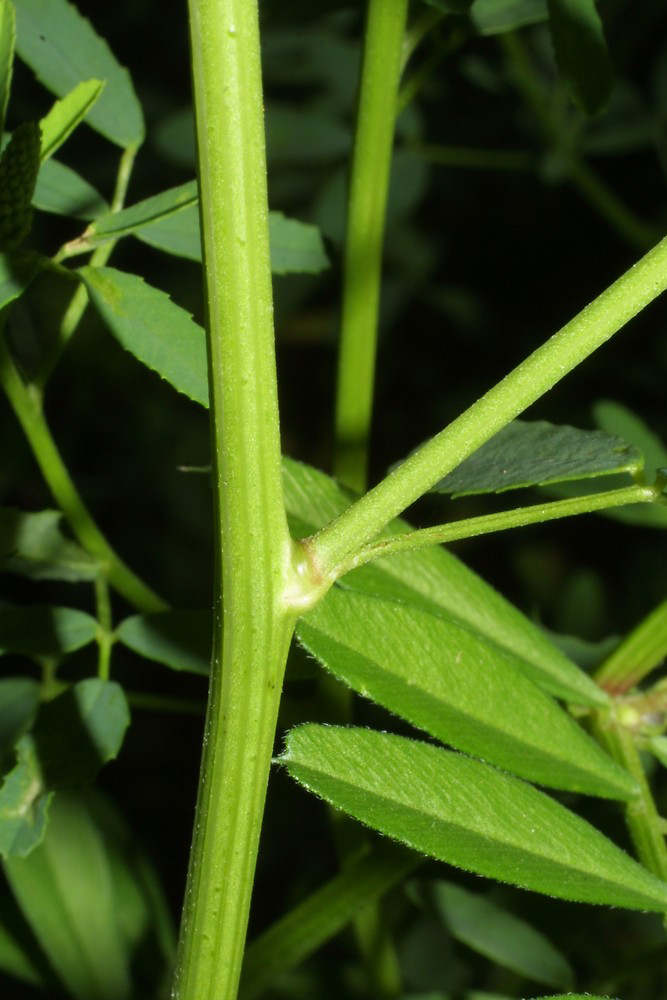 Control measures must be continued for a minimum of five years to ensure that seedlings/the seed bank is depleted. Monitoring must continue as seeds may sprout seedlings for up to 80 years. Many of these control measures, if done only once, will actually increase densities by stimulating re-growth.

Pulling can be effective in small areas in sandy soil, where the plants are in their first year and in the spring before they have developed a deep root system. Plants that haven’t yet flowered can be pulled and left on site as they will not produce seeds.

Mowing or cutting the second year plants back to about 2.5 cm from the ground will reduce seed production and plant density. It will not eradicate the plants immediately and they may re-sprout in the 3rd year to produce seeds.

For fewer plants or new infestations, first year plants can be removed by digging them out of the ground. It is crucial to cut the root under the soil and to conduct follow up monitoring for any re-sprouts.

Concentrated grazing during late summer and fall can reduce the root reserves of the plants, which may lead to plant mortality the next spring. However, grazing should be done with caution due to the concentration of coumarin (a chemical compound that causes blood thinning) in the plants. Cut plants should not be used as feed due to increased coumarin levels as the plant decomposes

White Sweet Clover does not move into or establish in shade, so if restoration is being done where a native tree canopy is being reestablished, the shade provided by those species may out-compete White Sweet Clover.

Chemical control for White Sweet Clover is usually not necessary unless it is a very large population that cannot be controlled using manual/mechanical means. If confronted with a large infestation chemical control may be used as described below

Herbicides must be applied in accordance with all label directions. For an up-to-date list of herbicides labelled for White Sweet Clover control, visit the Pest Management Regulatory Agency’s web site at www.pmra-arla.gc.ca. The Ontario Ministry of Agriculture, Food and Rural Affairs (OMAFRA)’s Publication 75, Guide to Weed Control is an excellent reference for all aspects of weed control, and includes a section on invasive plant management.

Refer to the label of the herbicide you are using for rates and instructions for foliar application. Anyone using a pesticide is responsible for complying with all federal and provincial legislation. Most non-domestic (i.e. commercial, restricted etc.) herbicides can only be applied by licensed exterminators

The Ontario Pesticides Act and Ontario Regulation 63/09 provide natural resources, forestry and agricultural exceptions which may allow chemical control of invasive plants on your property. Other exceptions under the Act include golf courses, and for the promotion of public health and safety.

Biological control is the use of an herbivore, predator, disease or other natural enemy to reduce established invasive species populations. Most invasive species have no natural enemies in their new habitats. Biological control aims to re-establish an ecological balance by selecting highly host-specific natural enemies from the country of origin, and moving them to the country where the invasive species is a problem. This is only done after extensive host-range testing in the country of origin or quarantine, to ensure that the potential bio-control agent is host-specific to the targeted invasive species. This method has been used successfully for invasive plants in North America, including Purple Loosestrife, Leafy Spurge, Diffuse Knapweed and St John’s Wort. There are many species which will feed on White Sweet Clover, including an alien sweet-clover weevil which is present in North America. However, no biological controls are currently being researched because of its use as a forage species in the US and in soil remediation and other industries.