Trending
You are at:Home»Herbs and Spices»Medicinal benefits of White Pine 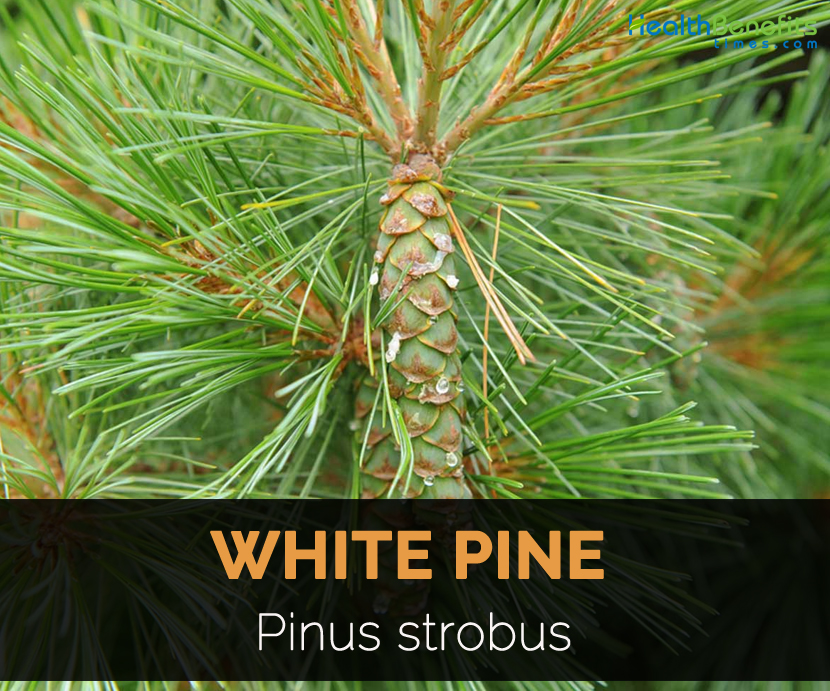 Pine is the common name of the largest and economically most important genus (Pinus) of the pine family (Pinaceae) of the conifers (cone-bearing trees) in general. Of the ninety or more species of pines, thirty are native to North America, distributed from north of Mexico, eastern, northern and the western states.

The outstanding characteristics of the genus are mostly erect, much branched, twigs with long shoots with scaled leaves and dwarf branches bearing long needles surrounded by scaled leaves at the base; the leaves are either primary, solitary, scale-like, spirally arranged, and usually deciduous some weeks after their appearance. The unisexual flowers (cones, strobile) appear in the spring on the same tree. Conifers often produce twin trees resulting from the presence of more than one embryo in a single ovule. Traditionally the genus Pinus is subdivided into two main groups: (1) the soft pine, or white pines, and (2) the hard or yellow pines.

White pine is an evergreen species which bears thin needles growing in five clusters. It is helpful for identification if one remembers that the number of letter in “white” are five which equals to the number of needles in cluster. Typically needles grows between 2 ½ to 5 inches long. 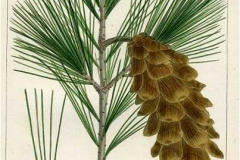 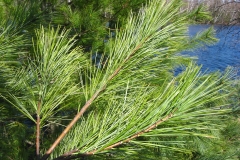 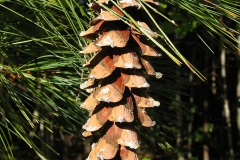 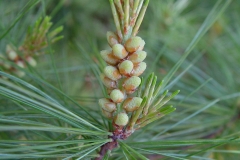 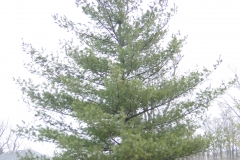 The bark of younger trees is thin and smooth. Mature trees have dark gray to brown bark which is fissures and shows ridges and deep indents.

White pines are monoecious which means each tree produces male and female cones. It occurs in the spring between May and June. Male cones have overlapping scales which opens to release pollen. Female cones measures 8 inches long and 1 inch in width. It is green in color and ripens to brown when seeds are mature and ready to be released into the wild.

The pine trees play an important part in the domestic life of the Indian. They use pine needles for sewing, resins as cement, and the nuts as food and decoration. The appealing use as medicine and food is, to us, the most outstanding. Pine nuts were made into a paste consistency and added to soups for infants and adults. They chewed the gum resin for sore throats; the same was also dried, powdered and applied to the throat with a swab. The resin and parts of some other plants such as small twigs of Juniper (Juniperus osteosperma) were used as a tea for colds, rheumatism, tuberculosis, influenza and chronic indigestion, kidney trouble, etc. The bark and new sprigs are useful as an expectorant, to modify quality and quantity of the mucus secretions and to favour its removal in bronchial and catarrhal trouble, rheumatism, scurvy, all chest affections, tonsilitis, laryngitis, croup and the like.

It is best to combine 1 teaspoonful of each of the following with 1 pint of water: Wild cherry bark (Prunus serotina), Sassafras (Laurus) and Spikenard (Aralia racemosa); steep ½ hr.; administer ½ teaspoonful to a mouthful every hour, depending on age and condition. Of use in diabetes with Uva ursi (Arctostaphylos), Marshmallow (Avthea) and Poplar bark (Populuas tremuloides). Prepare as above and take 3–4 cupfuls daily of the tincture, ½–1 fl dram.

The heated resin is used as a dressing to draw out imbedded splinters or to bring boils to a head; sores, cuts, swellings and insect bites also respond favourably. The hot resin can be spread on a hot cloth and applied as you would a mustard plaster for treating pneumonia, sciatic pains and any general muscular soreness.