Trending
You are at:Home»Oils»Wormseed oil facts and benefits 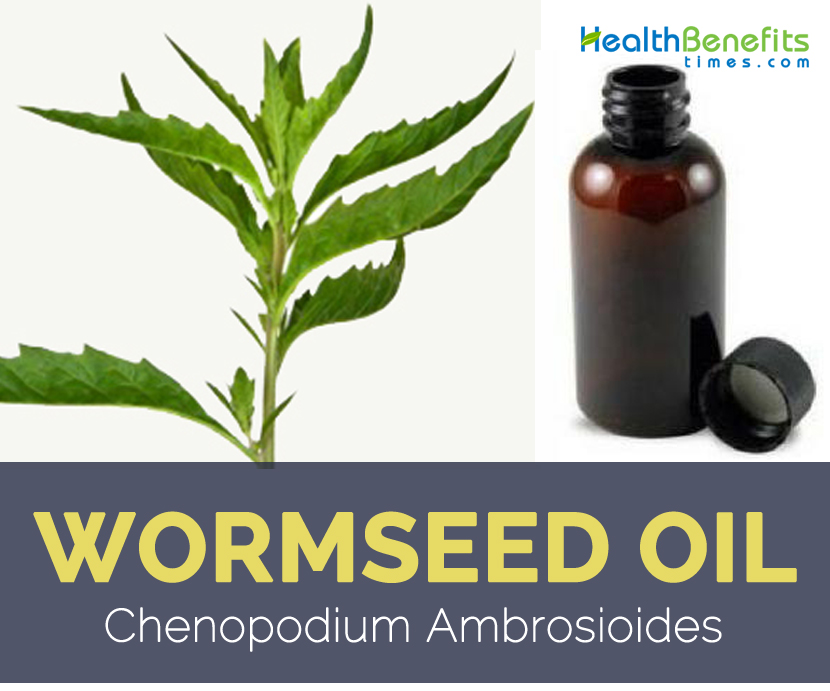 Wormseed oil which is also known as Chenopodium oil is a volatile oil obtained by the steam distillation from the fresh flowering and fruiting plants of Chenopodium ambrosioides of the variety anthelminticum of the family Chenopodiaceae. The oil is not present in the roots. It is also known as American Wormseed oil, Mexican tea, chenopodiol and chenoposan. The plant is very common in Eastern and Central USA. It is widely cultivated in Caribbean islands, Europe, Maryland, Mexico and Canada. In India it is found in the states of West Bengal, Tamil Nadu, Assam and in Karnataka.

Wormseed is an annual or perennial herb that grows up to a height of five feet and has a straight stem, which is slightly woody at the bottom and has a potent smell. The leaves of wormseed appear alternately on the erect stem and are roughly toothed and shaped like a lance. The herb produces thick spines of minute green-hued flowers during the period between August and November at the leaf axils. The wormseed fruit is perfectly enclosed in the calyx, obtusely angled, the seed smooth and shining, the embryo forming about three-quarters of a ring around the mealy albumen. The whole herb has a strong, peculiar, somewhat aromatic odor, which is due to the presence of a volatile oil and is retained on drying. The leaves have been used in place of tea in Mexico.

For centuries, the Maya of Central America used Wormseed to expel worms, and hence its name. By the middle of the 18th century, the plant’s medicinal use was firmly established in the eastern US for treatment of worms, especially in children.

The Catawaba peoples of the US used the plant for poultices to detoxify snake bites and other poisonings.

Although the Arrach has long been used as a medicine in Europe, Northern Africa, and the Caucasus to relieve menstrual cramps and promote menstruation, its distinctive unpleasant smell often prevents any danger of continued or long-term use. Its name comes from the Nahuatl word for skunk (épatl). Zorillo is the Spanish word for skunk.

Used as both a food and a remedy, the plant was used by the Aztecs, who developed very classy and refined uses to flavor many of their dishes with the herb. Today, it remains a staple in Mexican cooking, spiking a pot of beans with its tangy flavor.

Medicinally, the Aztecs used the plant to treat asthma and dysentery. Mexicans consider it a first-line of defense against intestinal parasites (particularly roundworms and hookworms), administering it to adults and children alike, as well as to animals. A tea is used for menstrual cramps, fever, and chills.

Wormseed oil is extracted from the entire herb, especially the seed or fruits, by a process called steam distillation from Chenopodium ambrosioides of the Chenopodiaceae family, an herb found throughout South America, Mexico, the Caribbean and the United States. The Mayans gave wormseed its name after realizing its efficacy in dealing with intestinal troubles. However, a German pharmacist was the first to successfully extract the true Chenopodium oil in 1895. It is also known as Jesuits’ tea, herb sancti mariae, American wormseed and Baltimore.