Trending
You are at:Home»Herbs and Spices»9 health benefits of Wormwood 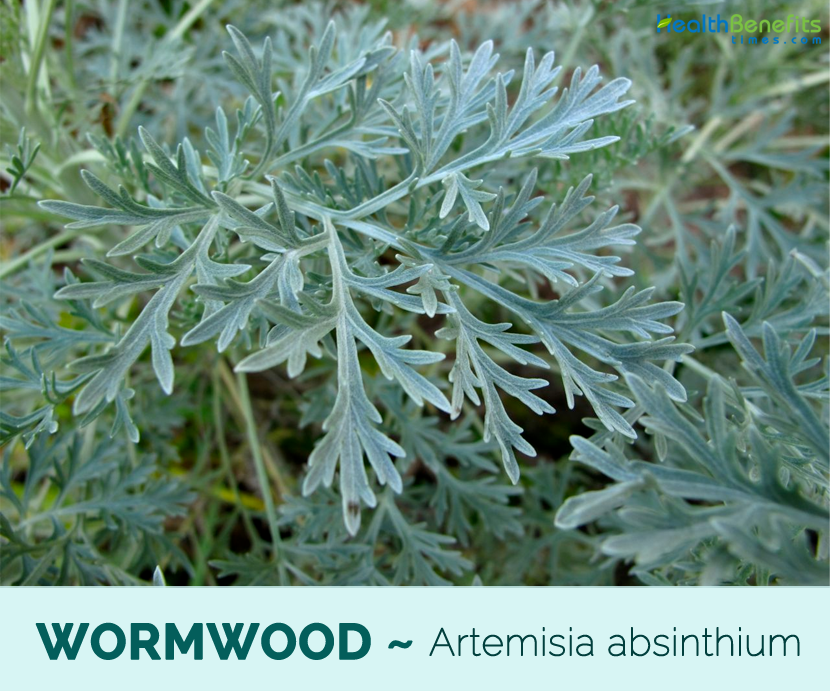 Artemisia absinthium commonly known as Wormwood, Mugwort, absinthium, Absinthe, grand and common wormwood, absinthe wormwood, green ginger, madderwort, old woman grande wormwood and ajenjo is the odorous perennial herb of Compositae family more commonly known as the daisy family and belong to the genus Artemisia. The genus Artemisia has more than 180 related species including the Mugwort, Sea Wormwood and the Field Wormwood. The plant is native to temperate regions of Eurasia and Northern Africa and extensively naturalized in Canada and the northern United States. The whole family is notable for the extreme bitterness of all parts of the plant: ‘as bitter as Wormwood’ is a very Ancient proverb. It has a narcotic property and due to wormwood herb aroma and bitterness it is commonly used in number of alcoholic beverages preparation for adding intoxication and flavor. It is used in beers, absinth, martini, vermouth, campari, and pastis. Bitter taste of wormwood comes from absinthin and artabsin present in herb.

Wormwood is a nonnative, long-lived, fragrant, herbaceous perennial plant growing about one and a half meters (four feet) in height. The plant grows naturally on uncultivated, arid ground, on rocky slopes, and at the edge of footpaths and fields. It prefers moderately fertile, dry to medium moisture, well-drained soils. The plant has taproot occasionally reaching 2 inches (5 cm) in diameter with shallow lateral branches spreading 6 feet in all directions. Stem is straight, growing to 0.8–1.2 meters (2 ft. 7 in–3 ft. 11 in) tall, grooved, branched, and silvery-green colored.

Leaves are spirally arranged, greenish-grey above and white below, covered with silky silvery-white trichomes, and bearing minute oil-producing glands; the basal leaves are up to 25 cm long, bipinnate to tripinnate with long petioles, with the cauline leaves (those on the stem) smaller, 5–10 cm long, less divided, and with short petioles; the uppermost leaves can be both simple and sessile.

Flower is pale yellow, tubular, and clustered in spherical bent-down heads (capitula), which are in turn clustered in leafy and branched panicles. Flowering normally takes place from July to October. Fruit is a cypsela without a pappus. It is grown as an ornamental plant and is used as an ingredient in the spirit absinthe as well as some other alcoholic beverages. Whole plant releases an aromatic odor and has a spicy, bitter taste. Many species of the Artemisia family tend to have medicinal properties.

The wormwood plant was cultivated in the French-Swiss border regions near Pontparlier and Val de Travers, two villages known as the historical “home” of absinthe, but it can now be found across much of North America. Initially recommended as a tonic for a variety of ailments, from headache to dysentery, the use of wormwood extract as a pharmaceutical cure for several different illnesses can be traced as far back as the Egyptian dynasty of 1600 B.C. Today it is fond throughout the world due to its outstanding health benefits.

Apart from being used as an ingredient in absinthe, wormwood has traditionally been used to treat various illnesses including digestive conditions, fevers, and dyspepsia and liver conditions. These days it is becoming more and more popular to treat conditions which include the following:

Malaria is a severe disease caused by a parasite that is spread by the bite of infected mosquitoes and attacks human red blood cells. Artemisinin is an extract isolated from the plant wormwood. Artemisinin is an herbal drug that is considered most powerful antimalarial on the market. It’s known for quickly reducing the number of parasites in the blood of patients with malaria. The World Health Organization recommends artemisinin-based combination therapies as first-line treatment for uncomplicated P. falciparum malaria.(1)

Wormwood has been used to treat many problems relating to the digestive system. It is used to relieve indigestion and also to encourage better digestion because of its ability to promote the production of bile and support gallbladder and liver health. It is particularly effective when it is combined with another digestive herb like ginger or peppermint.

Wormwood is used to bring down high temperature due to fever. The herb works by inducing sweating in patients suffering from high fever. It also helps in reducing fever that is caused by the actions of intestinal parasites.

4. To Kill Worms and Parasites

Wormwood is quite beneficial to destroy harmful parasites found in the body. It is considered one of the affordable herbal medicines for the people of developing countries who cannot afford high cost of pharmaceuticals. It is capable of destroying numerous parasites including pinworms and roundworms.

According to research wormwood helps to produce an intestinal environment that is deadly to parasites and other dangerous organisms.(2), (3)

Wormwood has mild anti-anxiety effects and many people use it to help overcome the symptoms of stress and anxiety. There is however little scientific research to confirm its use for anxiety so use it cautiously.

6. To Stimulate the Appetite

Wormwood has traditionally been used as a tonic to encourage the appetite which is especially important following about of illness. The recommended amount to help improve your appetite is between 10 and 20 drops of liquid extract mixed into a glass of water and drunk around 15 minutes prior to every meal.

Irritable bowel syndrome is a very common condition which affects the colon and can cause several horrible symptoms including cramping, bloating, abdominal pains, diarrhea and constipation.

Some people succeed in treating many of these symptoms with wormwood either alone or in combination with other herbal remedies. Research also shows that wormwood combined with other herbs was effective against the symptoms of abdominal complaints like nausea, heartburn and intestinal spasms. (4)

Wormwood has natural emenagogue properties which basically mean that it can help stimulate menstruation and help regulate the cycle of menstruation. This may be desirable because herbal emenagogue preparations like wormwood can be used as an emergency contraceptive or as a natural treatment for infrequent menstruation.

Research has suggested that wormwood can improve the symptoms in Crohn’s disease. Its regular consumption for 2 – 3 months can help lowering symptoms of the disease and reducing steroid dosage.

Other Traditional uses and benefits of Wormwood

Wormwood is available in a number of forms including capsules, tinctures, tablet and liquid extract forms. Its oil is also extracted and sold as essential oil. There is inadequate proof regarding an exact dose but traditionally for indigestion and other digestive problems, it has been taken at around 3 to 5 grams each day as an herbal infusion.

As well as the commercially available forms of wormwood, it is often drunk as a tea. You can make your own home made wormwood brew by following these steps.