Trending
You are at:Home»Herbs and Spices»Allspice facts and health benefits 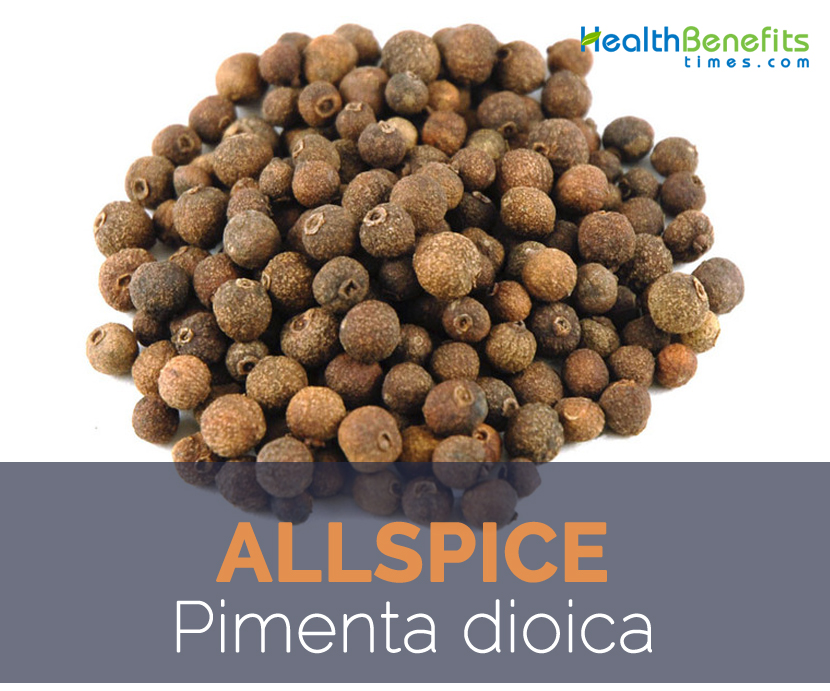 Allspice which is also called Jamaica pepper; Kurundu, Myrtle pepper, pimento, allspice berries, or newspice is a spice that is the dried unripe fruit of the Pimenta dioica plant, native to the West Indies, southern Mexico and Central America. It is an evergreen tropical shrub belonging to the Myrtaceae family and in the genus: pimento. Allspice is sad to have discovered by Christopher Columbus in Jamaica during his second voyage to the new world. During 17th century, it was named allspice spice traders identified it with mixture of flavors of clove and cinnamon, and nutmeg. Gradually it spread throughout the world because of its unique flavor as well as its healthy quality. Normally berries are picked when they’re ripe and allowed to dry in the sun, ending up as the somewhat shrunken, hard berries known as allspice. Later these are ground up into spice for culinary use, or the essential oil can also be extracted. Allspice is found used in baking, mostly mincemeat and mixed pickling spice since ancient times till now.

Allspice, also commonly known as Jamaican pepper or pimento, is one of the extensively used spices in the Mexican as well as other Central American cuisines. Allspice is a small, globose, berries 6 -10 mm diameter, with a thick, woody, brittle pericarp and are green while young turning to dark purple when ripe. There is a thin layer of soft, sweet aromatic pulp around the seeds that is very delicious and reminiscent of cloves. The skin is much wrinkled. They are picked when green and unripe and are traditionally dried in the sun. When, ending up as the somewhat shrunken, hard berries. Allspice berry has strong, spicy and pungent smell that closely resembles a mixture of black-pepper, nutmeg, cloves, and cinnamon and pungent and slightly peppery taste. Each berry has two hard, dark-brown, reniform seeds. Seeds are about the size of a peppercorn. Whole fruits have a longer shelf life than the powdered product and produce a more aromatic product when recently ground before use.

Allspice is considered to have originated from West Indies – Greater Antilles, and possibly parts of Central America – from southern Mexico to Guatemala, Belize, El Salvador, Honduras and Nicaragua.  In the 1600’s it was introduced to Europe and became a popular substitute for the more expensive cardamom. In England it was used to preserve fish and to flavor beef. It is currently extensively grown in Jamaica, Guatemala and Mexico (Yucatán), also in northern South America, India and Réunion.

Even though we believe of it like a cooking component, allspice is additionally considered to have got therapeutic qualities. Allspice is about 4% oil. A substance within the oil, known as eugenol, has germ killing as well as pain reducing features. Research claims that allspice might also combat particular bacteria, viruses as well as fungi and also enhance digestion of food. Listed below are some of the popular health benefits of using allspice:

Allspice consists of considerable amount of manganese which is extremely essential for healthy growth of human bones. Osteoporosis and arthritis are few of the possible problems related with manganese deficiency. Manganese that we consume is stored in bones, liver and kidney and any insufficiency of manganese may directly affect these organs as well as their actions. Allspice is an essential ingredient that adds to bone density and bone repair. Some research recommended manganese supplementation to improve BMD (Bone Mineral Density).(1)

One of the most important features of allspice is its capability to lower inflammation and relieve pain in parts of the body. The active ingredients within the spice have chemical compounds which eliminate inflammation, making it perfect spice to give you some relief from arthritis, gout, muscle aches, or even hemorrhoids. Apart from that allspice has certain analgesic components which allow for pain reduction in the case of injury or surgical recovery.(2)

Iron contained in allspice acts as a carrier of oxygen in the body and transfers it to the muscles and the brain, thus increasing both physical performance and mental alertness. Low levels of iron in the body make you distracted, short-tempered, and fatigued. Research conducted by the University of Melbourne recommends iron supplementation for improving exercise performance in women. So include iron rich food in your normal diet to gain sufficient amount of iron.(3)

Allspice has calming, rubefacient effects which make it perfect for comforting the stomach and also facilitating healthy digestion. Eugenol found in allspice help to eliminate digestive problems like constipation, diarrhea, nausea and vomiting, while also encouraging regularity, which can help to reduce bloating and excess flatulence. The anti-inflammatory feature of allspice also eases cramps, which can ease the entire process of digestion.(4)

Researches have shown that consuming calcium rich foods are linked with a reduced risk of colon and rectal cancers. There’s in fact a link between calcium supplements as well as heart attacks, therefore it’s best to get the mineral from calcium rich food sources. Allspice consists of 661 mg of iron which is 66.10% of the daily recommended value so include calcium rich food to remain safe from cancer.

Allspice consists of certain antibacterial and antifungal effects, mainly in terms of stomach bacteria. In addition to assisting the gastrointestinal system function efficiently, it also protects from outside attack through a natural immune response. Additionally, when allspice is included to certain foods, it neutralizes the bacteria at that level, before it enters the body and start damaging them.(5)

Allspice consists of copper which is a potent antioxidant that defends cells from free radical damage. It helps to reduce the appearance of wrinkles, age spots, and even macular-degeneration. Including allspice is considered beneficial to slow aging process since it contains 0.553 mg of copper which is 61.44% of the daily recommended value.

The antimicrobial, antibacterial, and antiseptic features of allspice help to enhance dental health though gargling with this spice wouldn’t be mostly pleasing, it has been related to healthier dental and gum health by protecting against bacterial pathogens.(6)

Fiber rich foods help to reduce constipation by adding bulk to the stool. Bulky feces can move through the gut faster, resulting in an increased stool weight and enhanced regularity. The increase in fecal bulk also “dilutes” the effect of toxic substances within the colon. Stool consistency, stool weight and frequency of excretion are signs of colonic function. Increased bulking and decreased transit time are considered as the most widely known beneficial effects of dietary fibers in general. Fiber rich food is better to reduce constipation.

Allspice contains significant amount of copper and iron that is ideal for enhancing circulation, since these are important components of red blood cells. Additionally, the rubefacient aspect of the spice is a stimulant, and warms the body. Combined with increased blood flow, it may result in extra energy and the proper oxygenation of extremities within the body. Iron also functions in the formation of certain enzymes which are crucial for general metabolism.(7)

Potassium found in allspice has an optimistic effect on heart health, since it is a vasodilator and releases much of the tension on the cardiovascular system. This causes an increase in blood flow through the relaxed blood vessels and decreases the strain on the arteries and heart, thus reducing the chances of developing atherosclerosis, and consequently, strokes and heart attacks.(8)

Allspice has a very low Glycemic index, which makes it beneficial and safe for those who are suffering from Type II diabetes. It rationalizes the blood sugar level if frequently consumed in the form of tea before the meals.

People who suffer from Type II diabetes, the function of sugar absorption and conversion to energy is partially reduced. It is because consuming food with low Glycemic index tends to control blood glucose levels post meal. Nearly 1 tbsp or 6 grams of grounded Allspice has a Glycemic index of just 1 on a scale of 250 where a typical target for a day is 100.(9)

How to Cook Allspice

To gather aroma and taste, chop your allspice right before you start to cook your meal and include it in the final stages of the recipe. When you cook it too much, the essential oils will surely evaporate. Allspice is a crucial component in Caribbean food. It is utilized in Caribbean jerk seasoning (normally the wood is used for smoking however the spice will make a practical replacement), in mole sauces, as well as in pickling. You may have allspice in curry powders, sausages as well as barbecue sauces. Allspice can be used an alternative, measure for cinnamon, cloves or nutmeg. Alternatively, to create an alternative for allspice, mix one part nutmeg along with two parts each of cinnamon as well as cloves.

Allspice is famous for being the primary component of the Caribbean “jerk” seasoning, a marinade combination, which is often used to flavor meats as well as poultry, particularly pork as well as chicken. The meat is marinated within the spicy seasoning and after that cooked over a wide open fire, just where allspice branches can be used for the firewood. Different methods of using allspice in many kinds of cuisines are:

Allspice goes well in several tasty dishes made out of meats just like beef, lamb and wild game. Dating back to Mayan times, it was utilized to cure as well as protect meats. Today, those same qualities turn it into a common and also suggested, accessory for jerky-like chicken, pork and beef. Unsurprisingly, smoked as well as canned meats also regularly include allspice, just like Indian curry recipes.

In terms of vegetables, allspice works the best for cabbage, Brussels sprouts along with other members of the cabbage family; along with beets, squash as well as other root vegetables; along with nightshades just like tomatoes, spinach, peppers, mushrooms and eggplant. It provides consistency to the flavor of soups and stews; also it perks up grains, from rice to couscous, millet to barley. You’ll also find it in fairly sweet dishes just like pumpkin pie, fruit pies, puddings, cakes as well as ice cream. In the indigenous South America, people utilized allspice to taste their chocolate.

In short, something that may possibly taste good along with cinnamon, cloves as well as nutmeg, possibly tastes excellent together with allspice too. The one difference in flavor in between allspice along with a combination of these other spices is always that allspice could be a moderate bit more peppery.

Allspice is frequently included with sauces and marinades, and is also a typical component in several mulling as well as pickling spice blends.