Trending
You are at:Home»Herbs and Spices»Facts and benefits of Bitter Milkwort 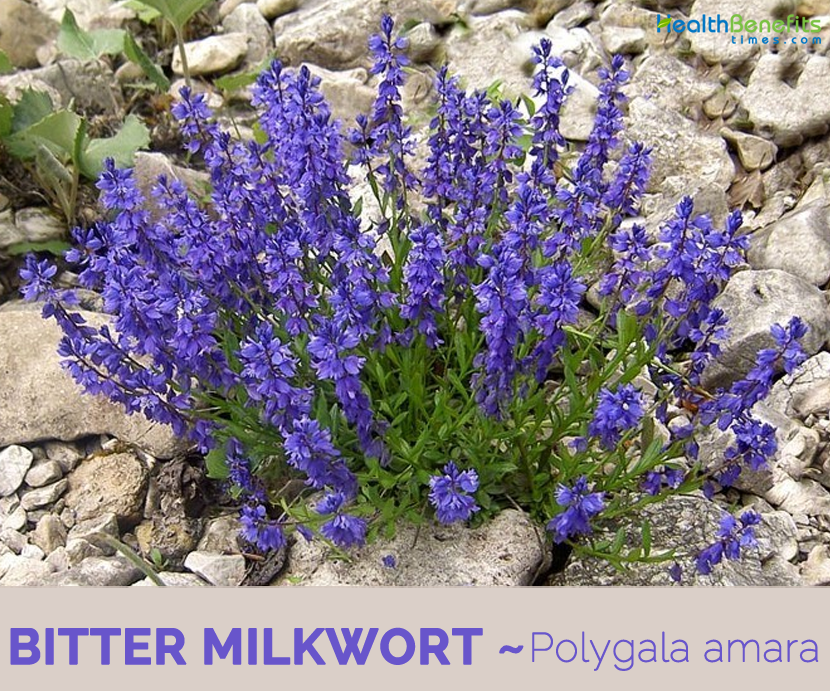 Bitter milkwort scientifically known as Polygala amara is a flowering plant belonging to Polygalaceae family, whose blossoms and roots can be used as medicine. It is also known as Milkwort, dwarf milkwort , European Bitter Polygala, European Senega, Evergreen Snakeroot, Flowering Wintergreen, Little Pollom, Polygala amara, Polygale Amer and Snakeroot. The plant is native to many parts of the globe especially in temperate zones and the tropics of Europe, Asia and also in South America and Africa. The genus name Polygala comes from the ancient Greek “much milk”, as the plant was thought to increase milk yields in cattle. The roots have a scent that is similar to wintergreen.

Bitter Milkwort is a perennial, flowering plant that grows about 5 to 15 cm high. The plant is found growing in grassland and Damp Mountain pastures, especially on chalk and limestone. The plant prefers moderately fertile moisture-retentive well-drained soil. The stems are branched at the base, decumbent or ascending. The basal leaves form a rosette, while the cauline leaves are alternate, oblong-cuneate or obovate-lanceolate. The leaf blades are smooth edged and undivided.

The blue or occasionally white or pink flowers are in many-blossomed racemes. Of the 5 sepals, the 2 lateral ones are large, petal-like, patent and 3-veined. The other 3 are smaller; die middle vein is green. The 3 petals are fused together with die stamens. These form 2 clusters in 2 green pockets on the larger, lower petal. The 2 upper petals form a kind of upper lip. The ovary is superior and bilocular witfi a spoon-like style. The fruit is an obcordate capsule, compressed at die sides and enclosed in the sepals. The fruit consists of two black seeds.

Bitter milkwort is taken for respiratory problems such as cough and bronchitis. It has chemicals that can thin mucus and make it easier to remove the mucus from your sinuses. However, there is inadequate evidence that shows whether bitter milkwort is truly effective for such use.  Some mothers also use Bitter Milkwort to increase milk flow during breastfeeding, but there is not enough research available to prove the use safe for pregnancy and breastfeeding.

Simple infusion of 2 teaspoons of plant in 1 cup of boiling water for 15 minutes is an exceptional remedy for inferior and medium respiratory tract diseases and chronic lung problems. Used for bronchitis, for allergic and/or infectious asthma, or in cases of wet or dry cough, the infusion administered as hot as possible, twice a day, cleans your airways and has an antispasmodic effect, calming cough episodes.

An old cure for indigestion, dyspepsia or liver problems is the Bitter Milkwort Wine which you can prepare at home from 1 liter of white wine, 5 tablespoons of Bitter Milkwort, 1 tablespoon Wormwood and 1 teaspoon of cinnamon, macerated for 12 days and filtered. Take one small glass of this wine before a meal.

Appropriate dose of bitter milkwort depends on several factors such as the user’s age, health, and several other conditions. At this time there is not enough scientific information to determine an appropriate range of doses for bitter milkwort. Keep in mind that natural products are not always necessarily safe and dosages can be important. Be sure to follow relevant directions on product labels and consult your pharmacist or physician or other healthcare professional before using.