Trending
You are at:Home»Herbs and Spices»Facts and benefits of Bittersweet 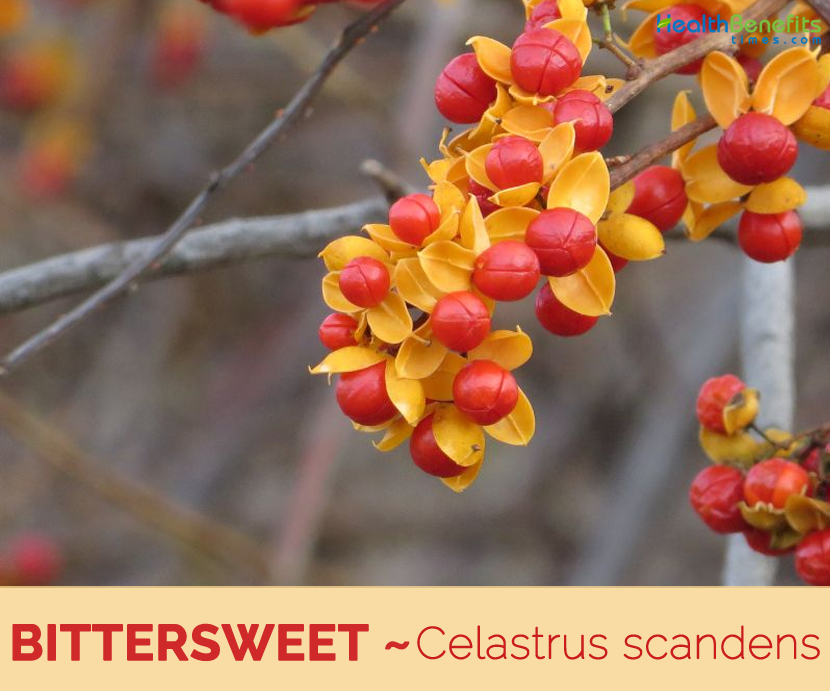 Bittersweet scientifically known as Celastrus scandens, is a species of Celastrus that blooms mostly in June and is commonly found on rich, well-drained soils of woodlands. Bittersweet is commonly known as American bittersweet, bittersweet, bitter nightshade, woody nightshade, climbing bittersweet, false bittersweet, climbing orange-root, fever-twig, fever-twitch, staff-vine, jacob’s-ladder and waxwork. The plant is native to central and eastern North America including Missouri. In Missouri, bittersweet is typically found in woodland areas, thickets, rocky slopes, bluffs, glade peripheries and along fence rows throughout the State (Steyermark). In the 1700s, plants were given the name bittersweet by European colonists because their fruits supposedly look like in appearance the fruits of a Eurasian nightshade (Solanum dulcamara) that was known to them as bittersweet. The common name of false bittersweet also came to be used for the within species to distinguish it from the Eurasian nightshade. American bittersweet is the generally accepted common name that is used today.

The plant belongs to Celastraceae, (The Staff-vine Family). Genus name Celastrus comes from the ancient Greek word kelastros, a name for an evergreen tree.  Scandens is Greek for trailing or climbing. The plant is best known for its showy red berries that brighten up fall and winter landscapes. All parts of the plant are potentially toxic. Fruits are poisonous to humans when ingested internally, but are favorites of birds. C. scandens roots were used by Native Americans and pioneers to induce vomiting, to treat venereal disease, and to treat symptoms of tuberculosis.

Bittersweet herb is a rapidly spreading deciduous, twining vine that grows about 15.2 meters (50ft) tall. The herb is found growing in rocky upland woodlands, sandy woodlands, typical savannas and sandy savannas, thickets, partially shaded banks along rivers, woodland edges along roadsides, limestone glades, fence rows, and sand dunes along Lake Michigan. The plant prefers rich, well-drained soils. It is a climbing vine, with an open, spiraling pattern and forms dense thickets along fences. Some stems may become several inches in diameter. Twigs are twiny, light brown, with small pointy buds at nearly right angles to the stems. No tendrils or aerial roots present. Stem are green becoming gray-brown and woody with age. Twining, woody stems are 30 feet (9.1 m) or longer and an inch or more thick at the base. The stems are yellowish-green to brown and wind around other vegetation. Barks are brown, initially smooth, later corky with diamond-shaped patterns, much later becomes finely scaly.

Leaves are simple, green, alternate, 2 to 4 inches long and about half as wide, generally oblong-elliptic or sometimes widest above the middle, finely serrated around the edges, hairless, rounded or slightly tapered at the base, often with a long taper to the sharply pointed tip (acuminate), on a hairless stalk about ¾ inch long. Leaves turn yellow in fall.

The flowers are dioecious (individual flowers are either male or female, but only one sex is to be found on any one plant so both male and female plants must be grown if seed is required) and are pollinated by Bees. The plant is not self-fertile. Staminate and pistillate flowers appear in clusters on separate plants in late spring. Flowers are tiny, greenish-white to yellow. Fertilized female flowers give way in summer to spherical orange-yellow fruits. Flowering normally takes place from Jul to August. Fruit is round, about ½ inch in diameter, initially green, the outer casing turning orange to red in late summer, splitting open in fall to disclose the 3-sectioned, bright red, berry-like fruit inside. Fruits are poisonous if ingested, but are considered to be quite tasty by many birds.

Traditional uses and benefits of Bittersweet