Trending
You are at:Home»Herbs and Spices»Traditional Uses and benefits of Black Locust 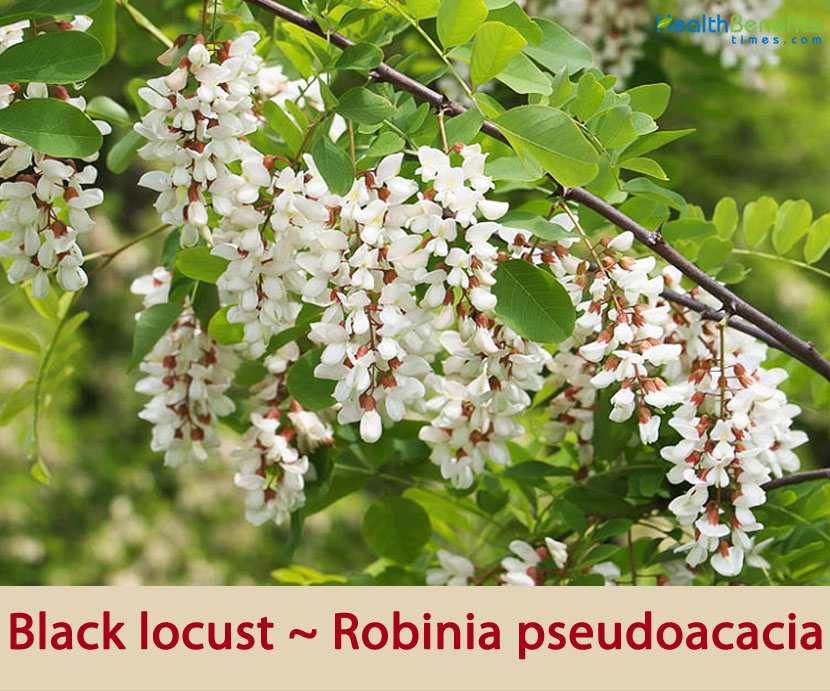 Robinia pseudoacacia, commonly known in its native territory as black locust, false acacia or post locust are actually a medium-sized tree, belonging to the tribe Robinieae and pea (Fabaceae) family. The plant is native to few small areas of the Eastern United States, but it has been widely planted and naturalized elsewhere in temperate North America, Europe, Southern Africa, Australia, New Zealand, Asia, other parts of North America  and is considered an invasive species in some areas. Due to its durability, adaptability to highly disturbed sites and because it burns well for firewood, it became a popular tree to plant in the early 1900s throughout North America. Black locust tree, Chinese scholar tree, common robinia, false acacia, locust tree, robinia, ship-mast locust, yellow locust, post locust, white acacia, acacia locust, honey locust, white locust, locust are some of the popular common names of the plant. Common name false acacia is a literal translation of the specific name (pseudo meaning fake or false and acacia referring to the genus of plants with the same name).

Genus name honors Jean Robin (1550-1629), of Paris, gardener to Henri IV and Louis XIII of France, who received new plants from Canada. A specific epithet pseudoacacia means false acacia. The name locust is said to have been given to Robinia by Jesuit missionaries. The Bible tells the story of how John the Baptist was kept alive in the wasteland by eating ‘locusts’, which were not the insects, but the pods of the Carob tree, which have some similarity to locusts. When the Christian immigrants discovered Robinia which has roughly similar pods, they were also called Locust tree. The tree’s fast-growing nature makes it widespread for mine reclamation, reforestation and erosion control, and it is still one of the most widely planted trees in North America. Black locust is commonly used for fence posts, mine timbers, poles, railroad ties, insulator pins, ship timber, nails for wooden ship construction, pulp, boxes, crates, etc. It is also a popular choice for woodworking projects, as the wood is naturally resistant to most rots.

Stems tend to be straight in forests but with spreading, curvy branches in open areas. The bark of young trees is brown or greenish, smooth and with conspicuous lenticels (pores) and spines. It becomes deeply tan or gray-brown and eventually becomes deeply furrowed with flat-topped ridges in older trees. The inner bark is orange. Two large spines 5-25 mm long with broad bases (i.e. stipular spines) are present near the base of some or all of its leaves. 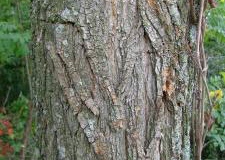 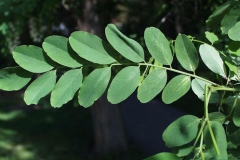 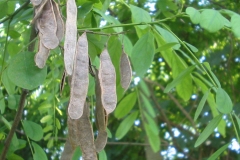 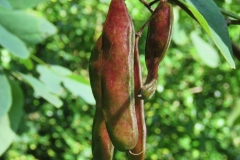 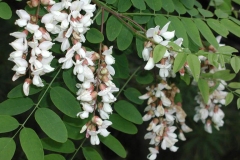 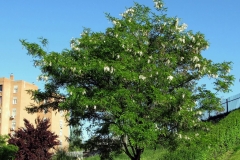 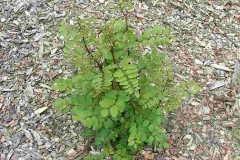 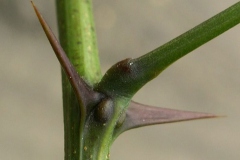 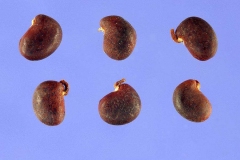 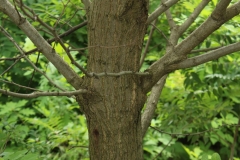 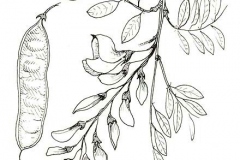 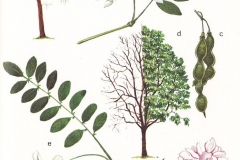 The alternately arranged leaves are 8-15 cm long and are once-compound (i.e. pinnate) and borne on stalks (i.e. petioles) 14-45 mm long. These leaves have several to numerous nearly 11-21 leaflets, which are borne on tiny stalks (i.e. petiolules) 1-3 mm long. The leaflets are 2-6 cm long and 1-2.8 cm wide and are oval (i.e. elliptic) or oblong in shape with entire margins and rounded or slightly notched tips (i.e. obtuse or emarginate apices). They are hairless (i.e. glabrous) or sometimes sparsely hairy (i.e. puberulent) when young.

The leaves come out of the bud folded in half, yellow green, covered with silvery down which soon disappears. Each leaflet initially has a minute stipel, which quickly falls, and is connected to the (rachis) by a short stem or petiolule. The leaves are attached to the branch with slender hairy petioles which are grooved and swollen at the base. The stipules are linear, downy, and membranous at first and occasionally develop into prickles. The leaves appear relatively late in spring. The leaf color of the fully grown leaves is a dull dark green above and paler beneath. In the fall the leaves turn a clear pale yellow.

The pea-shaped flowers are arranged in elongated clusters (10-15 cm long) that are borne in the leaf forks (i.e. in axillary racemes). These flowers are predominantly white, occasionally pink or purple and are borne on stalks (i.e. pedicels) 5-10 mm long. They have five hairy sepals 5-9 mm long that are fused together at the base (i.e. into a calyx tube) and five petals 15-20 mm long. The uppermost petal (i.e. standard) is larger, often with some greenish markings at the base. There are also two side petals (i.e. wings) and two lower petals are fused together and folded (i.e. a keel). The flowers also have ten stamens, nine of which are fused to each other and one of which is separate, and an elongated ovary that is topped with a style and stigma. Flowering occurs mostly during spring and early summer (i.e. from September to December).

Fertile flowers are followed by elongated and flattened pea-like pod that are 3-8 cm long and 10-15 mm wide. Fruits are initially green turning to brown in color as it matures. These fruit are hairless (i.e. glabrous) and split open when mature to release seeds. The fruit usually consists of 4-8 seeds.

Seed pods consists of 4 to 8 flat, bean-like toxic seeds each about 3 to 5 mm long. The seeds are dark orange brown with irregular markings. They ripen late in autumn and hang on the branches until early spring. There are typically 25500 seeds per pound.

Black locust is native to the eastern United States, but the exact native range is not accurately known as the tree has been cultivated and is currently found across the continent, in all the lower 48 states, eastern Canada, and British Columbia. The native range is supposed to be two separate populations; one centered about the Appalachian Mountains, from Pennsylvania to northern Georgia, and a second westward focused around the Ozark Plateau and Ouachita Mountains of Arkansas, Oklahoma and Missouri.

Black locust’s current range has been expanded by humans distributing the tree for landscaping and now includes Pakistan, India, Australia, Canada, China, Europe, Northern and South Africa, temperate regions in Asia, New Zealand, and Southern South America. In Australia black locust has become naturalized within Victoria, New South Wales, South, and Western Australia. It is considered an environmental weed there. In South Africa, it is regarded as a weed because of its suckering habit.

Various parts of the black locust tree have different uses. They can be used to purify the body, cure spasms and encourage proper flow of bile. Some of the well-known health benefits and therapeutic uses of black locust are as follows

Black locust is quite difficult to control. Because this species is strongly clonal, all stems in a clone must be treated. It is critical to monitor the site to ensure that cut and treated stumps do not resprout—if a single stem survives, the entire clone may regenerate.

Control of established black locust populations generally needs the use of herbicide although mechanical control may occasionally boost the effectiveness of other methods.

Since most black locust spread is vegetative, and saplings are connected underground, hand-pulling is not useful. In general, damage to the root causes sprouting also. On highly disturbed sites, cutting trees and removing the roots with a bulldozer has been recommended but does not appear practical in most settings.

Cutting without the use of herbicide produces prolific sprouts and is not advised. In a comparison of cut and uncut sites, those that had been cut had twice the growth rates of those that had not been cut, and began to flower in half the time.

In a North Carolina effort, browsing by a combination of cattle and domestic goats effectively controlled the height growth of black locust. After 4 seasons, all black locust were dead. Since black locust can be toxic to cattle, caution is advised. Black locust is raised specifically to feed domestic goats in Pakistan and New Zealand, and they appear to be a better choice for control.

In most cases, effective control of black locust requires the use of herbicide. Factors that should be considered when selecting an herbicide for use on a particular site include proximity to water or wetlands, presence or absence of desirable native vegetation, potential for erosion and the effectiveness of the herbicide under consideration on black locust.

In fire-adapted communities, prescribed burning may enhance control of black locust over the long term, but should always be considered as part of an integrated management plan for the site as it will stimulate the species over shorter time spans. When prescribed burning is initiated, it should be supplemented with other control methods.

Black locust is susceptible to witches’ broom disease caused by the virus Chlorogenus robiniae as well as fungal diseases that cause heart rot. It is also vulnerable to damage from two native insects, the locust borer (Megacyllene robiniae) and the locust leafminer (Odontota dorsalis).