Trending
You are at:Home»Beverages»Health Benefits of Black Tea 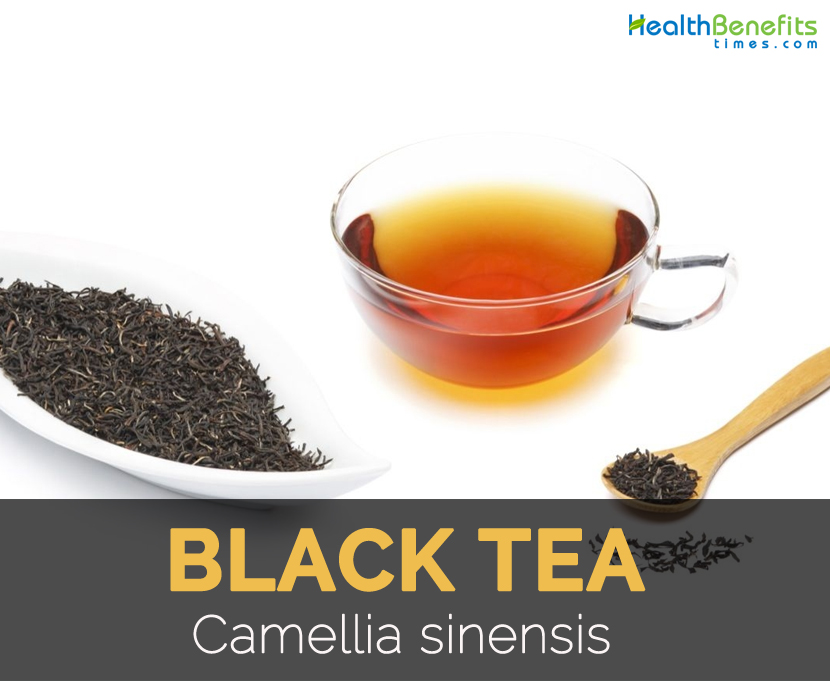 Literally, tea is the most consumed beverage after water worldwide. It is consumed hot in the East and cold with iced tea or hot with milk in the West. Black tea is a well-known variety of tea and is consumed regularly in Western and South Asian countries such as India and Sri Lanka.

Black tea is usually served without milk. It is prepared from tea plant which is scientifically called Camellia sinensis. The oxidation level provides the unique flavor and color ranging from amber to dark brown which tastes savory to sweet. The tea is more oxidized in comparison to green, oolong and white teas. It has stronger flavor. An oxidation process turns leaves from green to dark brownish to black color. Oxidation refers to expose leaves to moist and oxygen rich air. These four types of tea are made from same leaves of shrub Camellia sinensis. Small leaved Chinese variety plant and large leaved Assamese plant are the two predominant varieties used. Traditionally large leaved Assamese plant is used for black tea but in these recent years, it is used to produce some green and white teas.

In Chinese language, black tea is known as red tea which describes the color of liquid. However, the English term black tea indicates the color of oxidized leaves. Green tea loses its flavor within a year but Black tea is able to retain its flavor for several years. Due to this fact, it is used as an article of trade. The compressed bricks of Black tea are used as a form of de facto currency in Mongolia, Siberia and Tibet in 19th century. Recently green tea has got popularity due to its health benefits; still black tea covers ninety percent of tea sold in the West.

The flavor of Black tea ranges from savory to sweet which depends on the oxidized time and how it was heat processed. Typically Black tea is more astringent and bitter in comparison to green tea but is correctly brewed; it could be smooth and flavorful.

Camellia sinensis is a shrub which reaches 2 meters tall. It has strong taproot and young branches are glabrous and grayish yellow. Leaves are elliptic to oblong, 8-10 x 3-4 cm with acute base, acuminate apex and petioles about 5 mm. Flowers are solitary, axillary and yellow to white measuring 2.5 to 3.5 cm diameter that forms in cluster of three. Fruit is a capsule in oblate or rarely globose measuring 1-1.5 × 1.5-3 cm. Seeds are subglobose, brown and 1 to 1.4 cm in diameter.

Several stories claim the origin of black tea. One story refers to Gong Du Wuyi Oolong that was developed in Wuyi mountain of China in 15th or 16th century. Other one refers that black tea named Xiao Zhong was first developed around 1730 in Fujian, China.

Black tea is the first tea type which was introduced to the Middle East and Europe. After it got commercial success in the West, this led to the large scale production in China. The production of black tea spread when the Scottish and English entrepreneurs and adventurers stole tea seeds and plants from China. Early English tea companies planted tea in other countries and invented machinery to process tea without the requirement of skilled tea makers. The production of Black tea over time spread to India, Kenya, Sri Lanka and later in Indonesia, Thailand, Vietnam, Brazil, Rwanda and others.

It is believed that tea is originated in China. The delicate and fresh tasting green tea became popular in Eastern society and still is the base of tea culture. The tea culture spread and the tea was processed to export beyond regions, across oceans and neighboring countries, it is known that the oxidized black tea is able to retain its freshness and also has better flavor over long journeys than minimally oxidized green tea. In earlier days of border trade between Tibet, China and neighboring countries, tea was dried, fermented and pressed into bricks so to use it as currency. The black tea produced in China is exported out of country.

In 1610, Dutch brought tea to Europe first and then in 1658, it arrived in England. Throughout 1700s, it got popularity in England’s American colonies. As England expanded its import of sugar from its Caribbean colonies in 1700s, the demand for tea had huge leaps. By 1800, annually English consumed 2½ pounds of tea as well as 17 pounds of sugar per capita. Then the trend of adding sugar to tea increased the demand for strong black tea.

In 1800s, the next leap came in the production of Black tea when the variety Camellia Sinensia assamica tea plant was discovered in the Assam region of India in 1823. This variety better suited for producing bold black teas that became high demand. In 1835, English started to plant tea gardens in India’s Darjeeling region near Nepal.

Both black tea and green tea is made from leaves of the plant Camellia sinensis. Leaves are dried and fermented that provides darker color and richer flavor to the tea than green tea. Black tea has antioxidants which help to combat free radicals, a chemical by-product that damages DNA. It also include quercetin which is a substance that combat inflammation and assist healthy immune function. Let’s take a look behind the health effects of black tea:

Research has shown that consumption of green and black tea lowers the chances of stroke. An individual who consume more than three cups of tea lowers the chances of stroke by 21%. Black tea has high amount of flavan-3-ols, gallic acid, flavonols and theaflavins that repairs coronary artery dysfunction in heart patients. It also reverses abnormal functioning of blood vessels resulting atherosclerosis, strokes and other cardiovascular problems. The people who drink black tea is less prone to heart problems.

Black tea contains theaflavins that destroys abnormal cells in the body before they create major damge or turn into cancerous cells. It also prevents stomach, ovarian, breast and skin cancer. It supports in increasing level of globulin hormones during menstrual cycle. Research results that antioxidants such as catechins and polyphenols found in tea prevents certain types of cancer. The women who regularly drink Black tea have less chances of ovarian cancer.

The intake of tea for long term lowers the level of fasting blood glucose and reduces rates of type 2 diabetes. Black tea comprises major bioactive compounds such as polyphenols that reduces glycemic index. A study conducted on elderly people shows that people who consume black tea on long term had 70% low chances of developing type 2 diabetes.

Black tea has high content of tannins and other chemicals that has relaxing and positive effect on digestive health. The tea has anti-inflammatory quality that helps to cure digestive problems. The presence of chemical compounds helps to combat stomach ulcers. Additionally, it improves immune system and tannins provide therapeutic effect on intestinal illness and gastric and also lowers digestive activity.

The polyphenols found in tea possess antibacterial activities. The study shows that Black tea lowers the chances of Helicobacter pylori infection. It is an effective treatment for sweaty and smelly feet. It prevents sweating and also closes pores. Apply chilled black tea bags to burns, razor bumps, redness and itchiness.

The consumption of Black tea reduces production of stress hormone called cortisol and also normalizes it. This tea has I-theanine which is an amino acid that eases stress and also promotes relaxation. Consume black tea to speed up recovery from stress because it could cause chronic illness such as coronary heart disease. It also helps to relax and promote concentration.

Black tea consists of polyphenols such as catechins, tannins and flavonoids that possess anti-microbial effect on bacterial and salivary enzymes. A cup of unsweetened Black tea when consumed regularly lowers inflammation, stop growth of bacteria in mouth and prevent cavities. Studies show that Black tea helps to lower the formation of plaque and also restrict its growth which enhance cavities formation and tooth decays. Black tea has polyphenols that destroys and surpasses bacteria that causes cavity and also obstruct the growth of bacterial enzymes forming sticky material that binds plaque to the teeth.

Black tea has major constituents of polyphenols such as thearubigins, theaflavins and catechins that are responsible for antioxidant activity. It assists in inhibiting the generation, scavenge free radicals and also protects cells from DNA damage.

Black tea has rich amount of antioxidants, anti-inflammatory and anti-aging properties. The consumption of Black tea promotes the appearance and health of skin. Applying black tea rinses to the face helps to add glow and moisture to the face and is an effective cure for dry skin. The astringent property helps to tighten skin and tones the look. It helps to lighten, age spots, blemishes and provides whitening effect on skin. It lowers the chances of non-melanoma skin cancers.

Tea has caffeine that blocks DHT, which is a hormone that is responsible for losing hair. It enhances the growth of hair and also slows down hair fall. Black tea rinses helps to soften hair and promotes its shine as well as color. Use it in a spray bottle and apply it to the scalp and leave for 20 minutes then wash it with usual shampoo and conditioner. It is an inexpensive way to dye grey hair and make it look shiny and healthy.

The consumption of Black tea helps to lower the level of bad cholesterol that is responsible for fatal attacks and heart strokes. Study found that people who had 1-2 cups of Black tea regularly have lower chances of heart problems in comparison to those having minimal amounts or no tea. Black tea also provides anti-hypercholesterolemia effect at chances for obesity or heart disease.

An analysis made shows that daily consumption of black or green tea helps to prevent ischemic stroke. Researchers found that the people who intake more than three cups of tea in a day have 21 percent lower chances of stroke in comparison to the subjects who drank less than one cup.

Black tea is processed and grown over the world varying geographies and climates. India, Africa and Sri Lanka are the three largest producers of black tea today. Literally, half of the world’s tea production is derived from India. Here are some of the most popular types of Black tea from these top-producing countries:

How to make Black Tea?

Step 2: Let the tea steep for around 3-5 minutes, depending on how strong you would like your tea.

Step 3: Serve in a teacup and enjoy.

How To Select And Store?