Trending
You are at:Home»Herbs and Spices»Know about California Pepper Tree 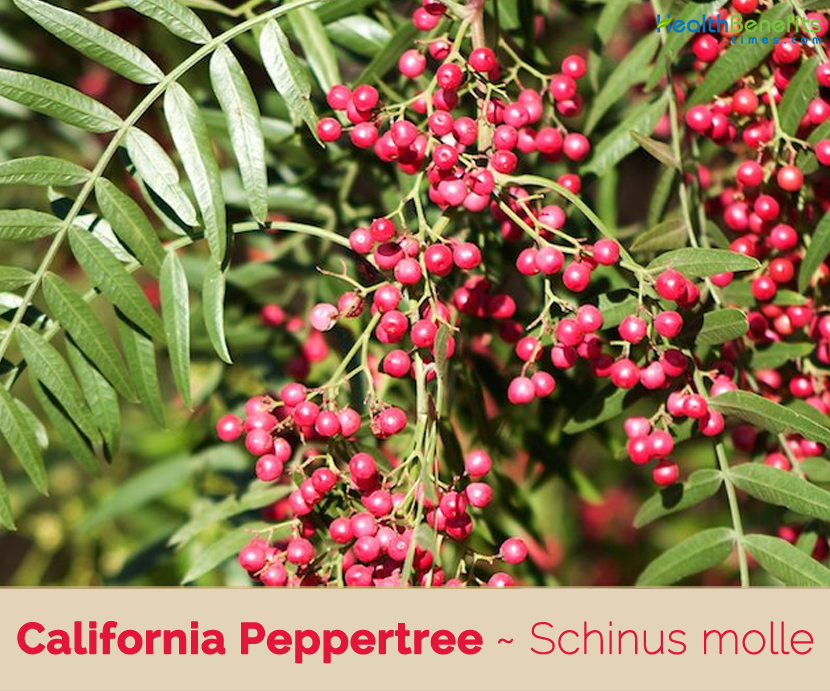 The word molle in Schinus molle comes from mulli, the Quechua word for the tree. The similarity of this species to the mastic tree (Pistacia lentiscus) is revealed in the origin of its generic name, from the Greek name for the mastic tree, ‘shinos’. The specific name ‘molle’ is the name by which the tree is known in western South America and is derived from ‘mulli’, the old Peruvian name. The common name ‘pepper-tree’ is due to the fact that the fruits contain seeds with a sharp taste, used for flavoring as a pepper substitute.

California Pepper Tree is a small to medium sized, branched, evergreen, dioecious trees that grows about 15 meters (50 feet) tall and 5–10 meters (16–33 feet) wide, with slender pendant (drooping) branches forming a spreading crown. The plant is found growing in abandoned fields, dry forests, along the banks of waterways and rivers, and slopes. Sandy and well-drained soils are preferable but it is tolerant of waterlogged, poorly drained and infertile soils. It is also tolerant of alkalinity and salinity. Barks are initially smooth gray-brown, later becoming irregularly furrowed with reddish brown splits and grayish coarsely scaly ridges. Twigs are slender, yellow-green and drooping.

California Pepper Tree leaves are alternate, imparipinnate on a winged rachis, with 9–20 pairs of opposite or alternate, sessile leaflets which are narrowly lanceolate to linear-lanceolate, 1.5–6 cm long by 0.2–0.8 cm wide, terminal leaflet smaller than lateral ones, grayish green, glabrous to sparsely puberulent with generally entire margins.

California Pepper Tree flowers are yellowish white borne profusely in pendant, axillary clusters. Sepals are deltoid, 0.4 mm long; petals are yellowish-white, narrowly ovate, 1.5–2 mm long; styles and stigmas. Flowers are followed by small, globose fruit, 5–8 mm in diameter with woody seeds that turn from green to red, pink or purplish to black. The fruits are carried in dense clusters of hundreds of berries that can be found year-round. Outer part of the fruit is sweet, the inner one bitter. The bark leaves and fruit are all very aromatic when crushed.

Other Products from California Peppertree