Trending
You are at:Home»Foods»Pumpernickel Bread nutrition and benefits 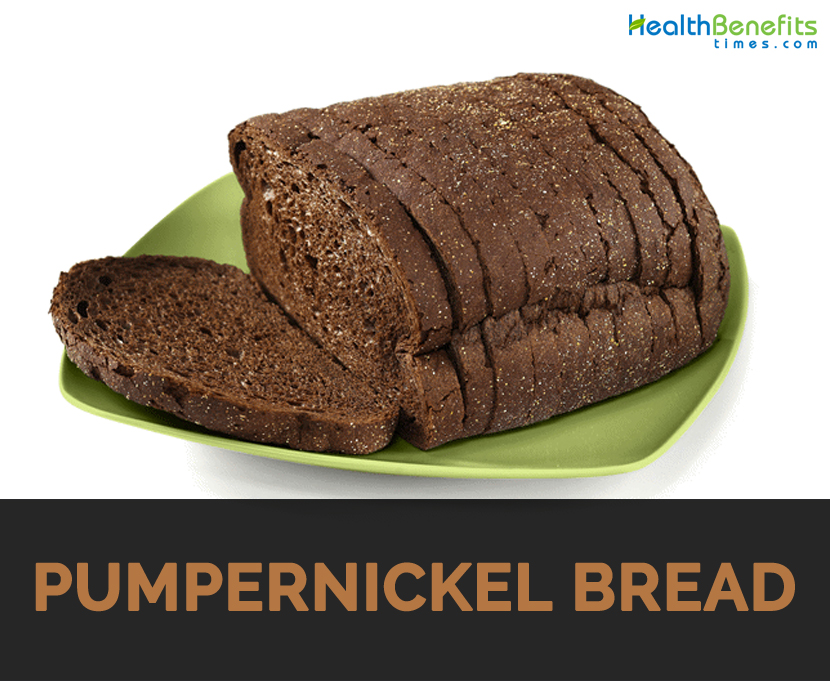 Pumpernickel is a heavy and slightly sweet rye bread which is made with coarsely ground rye and sourdough starter. It is made with the combination of whole rye berries and rye flour. It was a traditional peasant fare at one time but during 20th century, different forms became well known through supermarkets and delicatessens.

Today, European and North Amercian pumpernickel varies in several characteristics which include use of additional leaveners. In North America, flavoring and coloring agents, higher baking temperature, addition of wheat and dramatically shortened baking time. Traditionally, Pumpernickel bread is made with acidic sourdough starter that preserves the structure of dough by counteracting highly active rye amylases. This method is augmented or replaced by adding lactic or citric acid with commercial yeast in commercial baking.

It is a brown bread which is made from coarse rye flour that possess rich and robust flavor. It pairs well with hearty foods such as smoked salmon and aged cheese. The nutritious bran and germ of rye offers rich chocolate color to pumpernickel. The word pumpernickel is derived from a German word “pumpern” which refers to break wind and “Nickel” which is a name Nicholas related with devilish or goblins characters. The term is derived from breads reputed indigestibility.

The Westphalian way bakes Pumpernickel for 16 to 20 hours in a steam oven. This provides a soft crust and a very dark color. Various recipes use cocoa powder, browning agents and molasses to create dark color of Pumpernickel. True Pumpernickel creases the dark color in its own due to Maillard reaction. In United States, dark brown bread sold as Pumpernickel does not resemble with real thing. The traditional way to bake the bread is at very low temperature for 12 to 16 hours but in US, molasses are added to provide dark color to the dough. The sugars slowly caramelize in a steam oven during baking process in authentic pumpernickel.

Pumpernickel is a variety of rye bread that has been known for the centuries by the name but the origin of word does not have certainty. Webster defines pumpernickel as a sort of bread made from unbolted rye which is a chief food of Westphalian pheasants and is common elsewhere now.

According to one theory, Pumpernickels is “bon pour Nicole” pronounced with German accent. The story indicates that in 19th century, at the period of Napoleonic invasions of Germany, A French cavalry soldier found heavy black bread peculiar to Westphalia. Then he exclaimed that it was good for his horse “bon pour Nicole”.

In Liepziger Illstrierte Zeitung, writer asserted that in year 1450, there was a great demand for food on the city of Osnabrueck and its vicinity. A magistrate undertook to bake bread and distribute it to the starving poor. He gave the name bonum piniculum. It was a good little bread and of good quality and well-liked by people that after the famine ended, they continued to bake bread. The similar bread or Pumpernickel is known as brown George in some parts of England. Perhaps it is conjectured as it was brought to England in early days of Georges of Hanoverian dynasty.

This bread offers thiamin, niacin, riboflavin and essential vitamins to promote metabolism. Dark bread is a good source of antioxidants, which is beneficial for preventing cell damage in the body. When tested, an antioxidant levels of various bread, it concluded that dark bread crusts such as dark pumpernickel has high content of antioxidants.

Pumpernickel bread makes the one to feel satiated for long time period. It has rye fiber in it that assist to maintain level of blood sugar from spiking after meals. It also helps the one to stay full and ease in between meals.

Breads with high insoluble fiber promote regularity of bowel movement. As insoluble fiber does not dissolve in liquids, it speeds up the movement of waste and food by lowering the chances of constipation.

Pumpernickel contains more riboflavin and niacin so incorporate it to the diet as it contains two B-complex vitamins which metabolize nutrients and provide fuel for cells. It supports the growth of healthy cells and has a role in cell communication. Riboflavin acts as antioxidant and prevents damage of cells. Two slices of Pumpernickel bread offers 1.6 milligrams of niacin and 0.2 milligrams of riboflavin. It offers 15 percent of daily intake of riboflavin for men and 18 percent for women along with 10 percent and 11 percent intake of niacin daily for men and women.

Pumpernickel promotes an intake of essential minerals such as copper and selenium. Copper assist to synthesize neurotransmitters which are the chemicals associated in brain cell communication. It has vital role in melanin production, which is a pigment that provides sun protection to the skin. Similar to riboflavin, selenium acts as an antioxidant activity and prevents from damage of tissues. It also supports healthy function of blood vessels and has role in muscle metabolism. The serving size of two slices of Pumpernickel bread offers 17 percent of daily recommended intake of copper i.e. 149 micrograms of copper. The serving size offers 23 percent of daily recommended intake i.e. 13 micrograms of selenium.

Pumpernickel has manganese that offers various health benefits. The consumption of two slices of Pumpernickel bread enhances an intake of manganese by 0.7 milligrams and offers 30 and 39 percent of daily recommended intake for men and women respectively. It assists the function of brain and prevents from blood clots and also maintains hormone balance.

A study shows that Pumpernickel bread possess four to eight times resistant starch with the breads made with barley and wheat. Resistant starch does not digest easily and benefits blood sugar. It moves right the stomach as well as small intestine and settles in colon where it is broken down by bacteria and expelled eventually.

How to make Pumpernickel bread?

Except cornmeal, put all ingredients in bread maker and set to the dough setting. It usually takes an hour and half. Sprinkle some cornmeal in work area, when dough is done. Make the dough in two equal pieces. Make each into round ball by coating with cornmeal. Make the dough smooth, and then let it remain on a baking sheet for about 20 minutes. Bake 45 minutes at 350 degrees Celsius.