Trending
You are at:Home»Foods»What is Soy Flour and its benefits 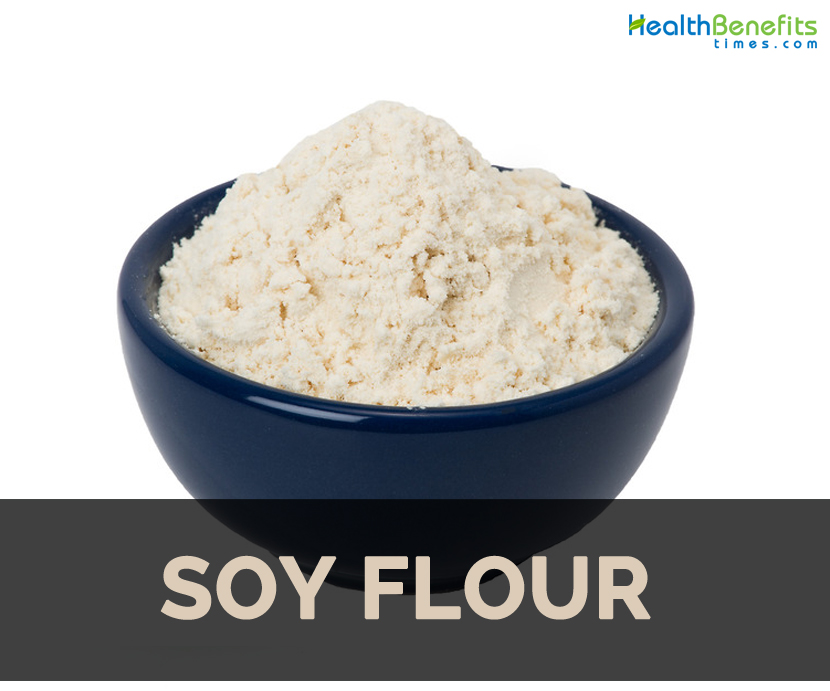 The soybean plant (Glycine max) is the world’s most widely cultivated and economically successful legume. Most soybeans cultivated are used as the raw materials for oil milling, and the residues are mainly used as feedstuffs for domestic animals. Although a variety of soy foods have been consumed in East Asia for many years, only limited amounts of soybeans are consumed directly in the United States and Europe. Soybean is a good dietary source of protein and oil. Soybean requires considerably more cooking time than other legumes to have a palatable texture, which may be part of the reason for the use of soybean as processed foods in East Asian countries. Accompanying the scientific understanding that soybean is a healthy food, several approaches have been undertaken to get more soy in the diet. At present, use of soybean protein is probably a suitable approach to increasing soybean consumption. In addition to protein and oil being major nutrients, soybean contains valuable components, and it is an exceptional foodstuff of which the constituent components are almost totally disclosed chemically.

Cultivated soybean is composed of approximately 8% hull, 90% cotyledons, and 2% hypocotyl axis. Thus, cotyledon contains the highest percentage of both protein and oil, whereas other components such as isoflavones are concentrated in the hypocotyl axis. Dry soybean contains 35% protein, 19% oil, 28% carbohydrates (17% dietary fiber), 5% minerals, and several vitamins.

Soy flour is extracted from ground soybeans which enhance protein, provides moisture to baked goods and provides basis for soymilks and textured vegetable protein. It improves taste as well as texture of foods and also lowers fat absorption in fried foods. Soy flour tastes from beany flavor to sweet and mild flavor.

Soy flour is an excellent source of soy protein, bio active components such as isoflavones and dietary fiber. This ingredient is a great source of iron, potassium and B vitamins. It has a bio-active component which provides relief from menopausal symptoms such as hot flashes, prevent breast cancer, prostate cancer, colorectal cancer and maintain healthy bones. The profile and content of bio-active components differs from product to product that depends on how the soy protein is processed and how much soy protein is found in the food. It is the healthy source of protein due to high quality of protein containing all amino acids essential for growth.

An epidemiological association between soy intake and reduced cardiovascular disease risk is well supported by a number of publications. In a recent prospective study of Chinese women, there was a more than 50% reduction of coronary events going from the lowest (<4.50 g/d) to the highest (≥11.19 g/d) quartile of daily soy intake. Soy intake in the general population is clearly linked to reduced cholesterolemia. In particular, Nagata et al. reported a progressive reduction of vascular risk in the presence of successive quartiles of soy protein intake in the Japanese population.  Early studies showed that strict vegetarians had a 60% depression of low density lipoprotein cholesterol (LDL-C) levels and somewhat higher levels of highdensity lipoprotein cholesterol (HDL-C) compared to free-living non-vegetarians of a similar age and the same gender. Similar findings were more recently noted in a comparison between vegetarian and non-vegetarian elderly women.

An area for possible clinical application of soy proteins is that of hyperlipidemias secondary to kidney disease, particularly the nephrotic syndrome. In this condition, changing from an animal to a vegetarian soy diet markedly reduces serum cholesterol and also reduces urinary protein excretion. A recent study by Teixeira et al. concluded that a soy protein isolate-based diet compared to one based on casein can improve both serum lipids and nephropathy biomarkers in Type II diabetic patients with nephropathy. From ongoing long-term studies, it also appears that a change to a soy diet may favorably influence the progression of renal disease.

In addition to its antiestrogenic effects such as suppressing estrogen levels and prolonging menstrual cycles, isoflavone may contribute to breast cancer risk reduction by its effect on cancer cell growth inhibition. These are either antiestrogenic or nonhormal effects since isoflavone inhibits ER-positive and ER-negative breast cancer cell growth. Since most of the effects are observed in the supraphysiological concentrations, further studies are needed to elucidate the effect in more physiological environments in in vitro, in vivo, and human studies. Coexistence of estrogen and other substances and high concentrations achieved by heavy isoflavone intake may interact to reduce cancer risk.

Soybeans are known as a low risk food for cancer, and a correlation between the intake of soybean foods and the morbidity of cancer, especially colon and prostate cancers, has been reported in an epidemiological survey. Chemical carcinogenesis is a multistage process that includes initiation, promotion, and progression, and many food plants show potent inhibitory effects against carcinogenic promotion. Maeda et al. found that the promotion-inhibitory effect of food plants, especially carrot leaf, oilseed rape, and beans (soybeans, black soybeans, azuki [red]beans), correlated closely with the alkyl peroxide radical scavenging effect. The anticancer effects of the soybean may mutually involve saponins, protease inhibitors, isoflavones, and inositol-6-phosphate, although there are few reports on the individual anticancer effects of these substances. Konoshima et al. investigated the Epstein-Barr viral antigen activity of triterpenoid saponins of the bean family and reported the antigen activity facilitatory effect of soyasaponin Be (ketone function at C-22), one of the soybean saponins, and a protective effect on Raji cells.

Viruses are infectious particles in which DNA or RNA (the viral genome) is wrapped in a protein capsid. Once DNA viruses invade nonpermissive cells, they are incorporated into the genome of the host cells and replicated or become a plasmid that is replicated. This often causes genetic changes in onpermissive cells. RNA viruses infect permissive cells, causing genetic changes in the cells. It has recently been revealed that the continuous synthesis of viral protein after these genetic changes causes cell transformation (neoplastic transformation) leading to cancerization, so the antiviral effects of food are now attracting research interest. The human immunodeficiency virus (HIV), a retrovirus, invades helper T-cells (Th cells) by binding to their membrane protein (CD4). This means there may be two ways to protect against HIV infection: inhibition of reverse transcriptase or binding to Th cells. When the inhibitory effects of Group A (bis-desmoside saponins), Group B (monodesmoside saponins, hydroxyl group at C-22), and Group E (monodesmoside saponins, ketone function at C-22) saponins on HIV infection are compared, Group B saponins show an inhibitory effect that is severalfold greater than that of other saponins. In particular, soyasaponin Bb shows the highest effect, providing almost complete inhibition of cell degeneration and of viral antigen expression caused by HIV. Since soybean saponins themselves do not act directly on HIV, the inhibitory effect of soyasaponin Bb on HIV infection does not provide direct inhibition of the reverse-transcriptional activity of HIV but may protect T4 cells from contact with HIV. The general characteristics of soybean saponins include bubble formability, or the surfactant effect. Group B saponins have greater inhibitory effect on HIV infection than Group A saponins (which have higher bubble formability), suggesting that this inhibitory effect is not derived from the physical characteristics of saponins.

The liver is an important organ that has roles in storing nutrients, producing bile, regulating blood flow, and breaking down alcohol and pharmaceuticals. Excessive intake of alcohol and drugs and viral infections may cause liver disorder (hepatitis), leading to serious liver diseases such as cirrhosis and liver cancer. Soybean saponin fractions have an inhibitory effect on these disorders. Ohminami et al. reported that Group A saponins, or bis-desmoside saponins, have this effect, and Miyao et al. reported the liver-damaging effect of Group B saponins, or monodesmoside saponins. Five Group B saponins have been isolated from soybeans. Soyasaponin Bb, the predominant saponin, effectively inhibits liver disorders induced by carbon tetrachloride, suggesting the usefulness of soybean intake.

Isoflavones are compounds with weak estrogenic and antiestrogenic activity, abundant in the Asian diet and present in varying amounts in different soy preparations. Individuals have highly variable gastrointestinal absorption of isoflavones (in some cases close to nil), and absorption is highly dependent on the individual’s gut microflora. Nevertheless, a recent meta-analysis of clinical trials concluded that soy isoflavones have hypocholesterolemic activity — contradicting an earlier meta-analysis that reported no association between changes in cholesterolemia and dietary isoflavones.

A recent consensus paper indicates that both soy protein and isoflavones may be needed for maximal cholesterol-lowering effect of soy protein preparations and that soy protein should be consumed with a low saturated fat and low cholesterol diet to maximize its effectiveness. It remains, however, difficult to suggest plausible mechanisms whereby soy isoflavones might exert any additional hypocholesterolemic effects to those of the protein. Evidence currently indicates that soy isoflavones at best provide only a minor additional hypocholesterolemic effect above that of the protein, though they may induce additional effects beneficial to cardiovascular disease risk, such as stimulating apo AI production.

There are few reports on the antidiabetic effect of soy protein diets in addition to the effect of body weight reduction. Soy proteins used in the studies are purified, semipurified ethanol extracted soy protein isolates (SPI), or SPI hydrolysate (SPI-H). The active component of soy protein diets on reducing the risks of CVD remains unclear. It may be the protein itself. Soy protein contains low methionine and has an amino acid pattern containing a high level of sulfur. Alternatively, other components may be active. Several studies have reported that small peptides resulting from limited digestion are effective. Further, soy protein contains isoflavones, which exhibit estrogenic and distinct physiological activities.

A soy protein diet increases the expression and plasma concentration of adiponectin and decreases the expression of PAI-1 in adipose tissue without any changes in body weight in rodents. These changes may yield beneficial effects for the prevention of CVD in humans. Further studies to clarify the effect of soy protein diets on the production of adipocytokines in humans are necessary.