Trending
You are at:Home»Fruits»Facts about Butcher’s Broom 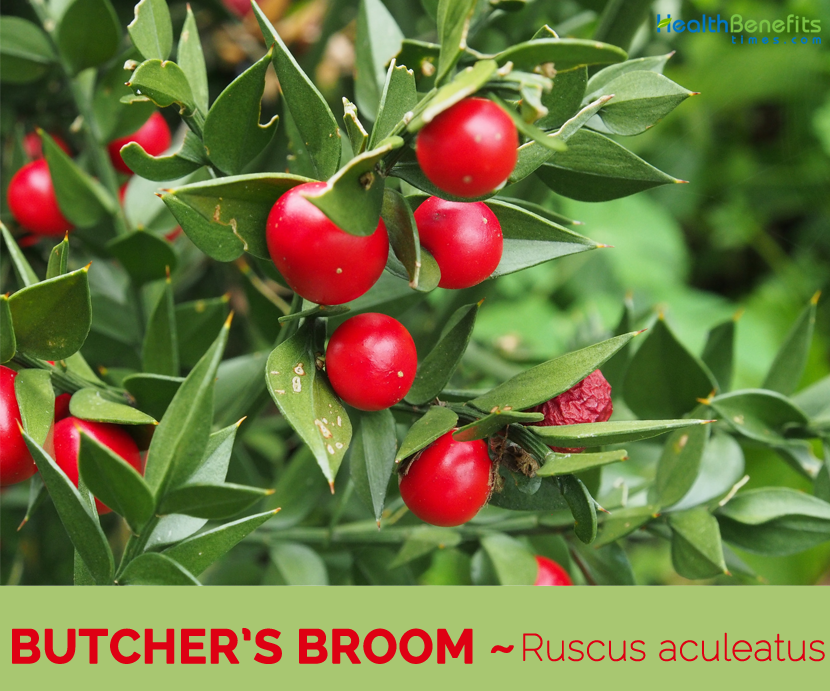 Butcher’s broom scientifically known as Ruscus aculeatus, is a member of the lily family with stiff, pointed leaf-like twigs, greenish white flowers and shiny red berries. The plant is native to Europe, the Black Sea area, northern Africa and the Azores. It is known variously as Knee holy, Knee Holly, Knee holm, Jew’s Myrtle, Sweet Broom, Pettigree, Torny fragon, box holly, Balai du Boucher, Rusco, Fragon, Petit Houx, knee holm, knee hull, pettigrue, prickly box, shepherd’s myrtle and wild myrtle. It occurs in woodlands and hedgerows, where it is tolerant of deep shade, and also on coastal cliffs. It is also widely planted in gardens, and has spread as a garden escape in many areas outside its native range. The word “rusci-” means butcher’s-broom-like, and the word “aculeatus” means prickly or thorny. R. aculeatus was given its common name, butcher’s broom, because its stiff twigs were bound together and used by butchers in Europe to keep their cutting boards clean.

Butcher’s broom is a slow growing low evergreen Eurasian shrub that grows about 3 to 5 feet tall. The plant is found growing abundantly on the wastelands, woods, bushy places, woodlands, coastal cliffs and hedgerows. It prefers well-drained soil and can grow in heavy clay and nutritionally poor soils. Root or rhizome is collected in autumn. The root is thick, striking deep into the ground. When dry, it is brownish grey, 2 to 4 inches long and 1/3 inch in diameter, having somewhat crowded rings and rounded stem scars on the upper surface and many woody rootlets below. If a transverse section be made, a number of vascular bundles in the central portion are to be seen. The root has no odor, but its taste is sweetish at first and then slightly acrid. The stems are erect, woody and heavily branched.

Leaves are small, brown membranous, triangular to lanceolate, and scale-like. The phylloclade (short shoots spread like leaves) is oblong, stiff, double-rowed, up to 2.5 cm long and terminate in a sharp tip. Actual leaves of this shrub are microscopic. Flowers and fruits are borne on cladophylls. The plant has prickly leaves with a single spine.

Small greenish white flowers are solitary or in a few clusters and grow from the middle of the leaves. They are dioecious. The corolla is deeply divided into 6 segments. In one variety the stamens are fused at the base. In fertile varieties the style is surrounded by a honey gland. The fertile flowers develop into showy, spherical to oblong, waxy cherry-sized, scarlet berries (3/8″ across) which mature from late summer to winter and remains on the tree all winter. Almost all the parts of this plant are used for medicinal purposes but the Butcher’s Broom extract is the most popular natural remedy derived from this hardy shrub. This extract is a diuretic and is also found as an ingredient in many natural remedies for hemorrhoids. This plant is quite similar to the edible asparagus plant.

For centuries Butcher’s Broom had been used to treat a variety of health disorders: ancient improved the healing of the bone fractures, cured dropsy, urinary obstructions, kidney problems, jaundice and gravel with the herb’s remedies. Gout, kidney and bladder stones, as well as chilblains were also effectively reduced with Butcher’s Broom. Listed below are few of the health benefits of using butcher’s broom

Butcher’s broom herb has a long history of use in treating venous disorders. Its active ingredients are ruscogenins. These compounds have anti-inflammatory and vasoconstrictor effects that are supposed to improve the tone of veins. Butcher’s broom extracts are used extensively (internally and externally) in Europe to treat varicose veins and hemorrhoids.

2. To Treat Edema Of The legs

Butcher’s Broom is quite beneficial for treating lymphedema and edema of the legs. It is said that the herb contains a component known as ruscogenin that has anti-inflammatory effects and is a venous vasoconstrictor. The herb is known to inhibit electrolyte re-absorption in the kidney to stop the process of edema.

Butcher’s broom is a traditional cure for varicose veins as well as other circulatory conditions. It has the ability to ease leg pain caused by poor blood circulation and other related symptoms (including swelling, itching, cramping, heaviness, tension and numbness). Other than poor circulation, irregular heart rhythm and other heart related problems can also be cured with butcher’s broom.

Butcher’s broom tea was useful to support healthy bowel function. Butcher’s broom is known to act as a mild laxative, a substance that encourages healthy bowel movements. This may help to deal with feelings of discomfort resulting from constipation. It is not yet recognized what causes this laxative effect, and research is ongoing in this area.

Orthostatic hypotension (also known as postural hypotension) is actually a condition where one’s blood pressure drops when arising from a seated or lying position. Chronic orthostatic hypotension can be a severely devastating disease in the elderly, in people with diabetes, fatigue syndrome, and Parkinson’s disease, and in people who take medications that affect the autonomic nervous system.

Because this herb has venotonic and vasoconstrictive action properties, butcher’s broom shows much promise in relieving symptoms of orthostatic hypotension. However, more research is needed.

In a research conducted in 1999, Butcher’s broom was effectively used to treat hemorrhoids and its symptoms such as itching and burning. The herb is accepted by the German Commission E for treating hemorrhoids. The herb is occasionally applied externally to the anus along with Witch Hazel.

European doctors have also used butcher’s broom for centuries to treat constipation and rid the body of excess fluid.

Butcher’s broom may benefit sufferers of various inflammatory conditions, including carpal tunnel syndrome, lymphedema swollen ankles and general swelling in the lower extremities. The herb increases blood flow, promotes circulation, strengthens blood vessels, reduces capillary fragility and prevents pooling of the blood in the legs. These properties give butcher’s broom the ability to relieve swollen lymph glands and alleviate swelling in the carpal tunnel of the wrist caused by repetitive motion. Standard dosage for treating inflammation consists of taking 150 to 300 milligrams two to three times a day.

The herb is used orally and in combination with Vitamin C & Hesperidin to treat leg ailments in humans. The usage of Butcher’s broom is promoted by the Memorial Sloan-Kettering Cancer Center for treatment against varicose vein under proper medical guidance.

The herb is known to tighten and contract blood vessels and capillaries in the body. Therefore, many clinical studies have shown the effectiveness of butcher’s broom to treat varicose veins. The herb can be used orally or can be applied topically to treat varicose veins. Varicose veins usually develop as a complication of pregnancy and overweight. However, pregnant women should not take this herb without consulting their doctors as there are no trials conducted to see the safety of the herb on the fetus.

Apart from the above benefits, Butcher’s broom also acts as a mild laxative and is diuretic in nature. Probably because of these effects the herb was traditionally used to treat jaundice, bladder stones, gout, gall stones and kidney problems. Research shows that the herb also helps in treating postural hypotension without increasing supine BP. Some say the herb can be used to fasten the healing of fractures and also can treat atherosclerosis.

The common dose recommended in the clinical trials for the treatment of chronic venous insufficiency is 7–11 mg of ruscogenin.

The flavonoid hesperidin methyl chalcone that is derived from butcher’s broom is used as a marker for standardization in the ruscus extract “Cyclo-3 Fort®”.

The extract dosage of 16 mg a day has been administered for chronic phlebopathy.

If it is applied as a topical cream formulation, 64–96 mg a day is recommended.